The Sommets Musicaux Festival in Gstaad 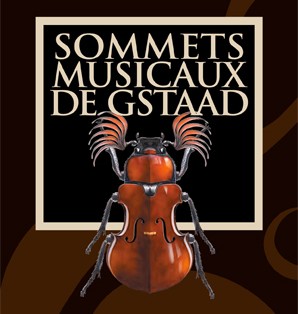 The Sommets Musicaux festival, held in Gstaad, Switzerland, and dedicated to chamber music, was founded in 2001. It takes place during the winter season in this posh ski resort located on the linguistic border between the French- and German-speaking parts of Switzerland. This year, the festival’s subtitle was “the two-headed eagle”: indeed, piano duos (four-hands or two keyboards) had the place of honor. There are always two concerts per day, part of an unchanging ritual: the bright young things perform during the afternoon concert, in Gstaad’s little chapel, and the recognized artists perform at night in Saanen or Rougemont’s church. Each year, one instrumentalist (as a matter of fact, two in 2014) is the event’s sponsor and helps to choose the artistic program, one composer is invited in residency, and young ensembles or performers receive prizes. Beyond the awards themselves, those prizes are accompanied by significant career opportunities. 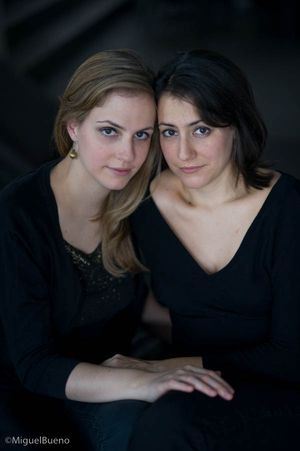 The last three days of the festival were the occasion to discover three young piano duos, all siblings, during the four-hands afternoons in Gstaad’s chapel. On February 6, the Beraia sisters (Natia and Tamar) started the day with two “classics,” namely Debussy’s Petite Suite and Schubert’s Fantasia in F minor, together with Mozart’s Sonata in D major, K. 381 and some of Brahms’s Hungarian Dances. It must be noted that this Georgian duo approached these works with a lot of power, which altered them in some ways. They also had an attack that quickly overloaded the resonant space and erased and sense of sonic fore- and background. The following day, the Bizjak sisters (Kidija and Sanja), who are well known in France, where they completed the piano studies that they had started in Belgrade and where they currently live, took a completely different approach to Mozart’s Andante with variations K501 and Ravel’s Daphnis and Chloe (in Léon Roques’s reduction), with precise and delicate articulation of sonic figure and ground and dynamics. But it is especially in The Rite of Spring that they gave their best: everything was there, from the finest technical precision to a committed interpretation. And finally, on the festival’s last day, it was the Gerzenberg brothers’ (Daniel and Anton) turn. They are Martha Argerich’s musical protégés, trained in Hamburg. Joseph Rheinberger’s Sonata in C minor does not add anything to the repertoire, but The Carnival of the Animals, played at full speed, tolerates the reduction very well. Plus, the work was enhanced with short humorous poems written and recited by Daniel Gerzenberg.

The evening concert series provided the occasion to applaud, on February 6 in the church in Rougemont’s, a piano duo too seldom heard in France: Adrienne Soós and Ivo Haags. Ravel’s Introduction and Allegro was not convincing, not because of the interpretation but because of its writing, which does not sound good when reduced for two pianos. However, Chopin’s Rondo for two pianos in C major was a nice foretaste for the duo’s virtuosic and unbridled interpretation of Lutosławski’s Paganini Variations. Alternating with them during the same concert, the Ludmila Berlinskaïa and Arthur Ancelle duo vivaciously performed three extracts from Tchaikovsky’s The Nutcracker (in Nicola Economou’s version). The four pianists then joined together for a quite curious (and not that interesting) work by Moscheles (The Contrasts) for two pianos–eight hands. The technical interpretation of this extremely pianistic work was flawless, but its musical interest is dubious. Finally, horn player Olivier Darbellay and cellists Christian Poltéra and Pablo Ferrández joined with the Soós–Haags duo to perform a memorable version of Schumann’s Andante and Variations.

On the next day, there was a night of symphonic music at the church in Saanen featuring the Camerata Europeana, an orchestra from Stuttgart whose conductor is Radoslaw Szulc. He was very talkative, and made lengthy speeches between works. The Aglika Genova–Liuben Dimitrov duo (the festival’s artists in residency) performed Mozart’s Concerto in E flat major, K. 365, with both power and subtlety. As an encore, they played “Hemiones,” from The Carnival of the Animals. Then, young virtuoso Ramón Ortega Quero performed Mozart’s Oboe Concerto and Beethoven’s Coriolan Overture. The latter was reasonably well played. The festival’s final concert honored the harp, which will be the instrument honored in the 2015 edition, and its artist-in-residence-to-be, Xavier de Maistre. He was accompanied by the Academy of St Martin-in-the-Fields, which was in great shape. They started the concert with a wild interepretation of Mozart’s Symphony no. 17, and then de Maistre played two concertos in a row: the Piano Concerto no. 19—which he himself transcribed for harp—and the Parish-Alvars’s Concertino for Harp and Strings. Mozart sounded well on the harp, but it should be noted that the sound balance was difficult to maintain, and that the effects of the left hand part were not fully rendered, despite the obvious qualities of the soloist. Parish-Alvars’s work, written by and for a harpist, with its dated nineteenth-century charm, put the spotlight much more on the performer. 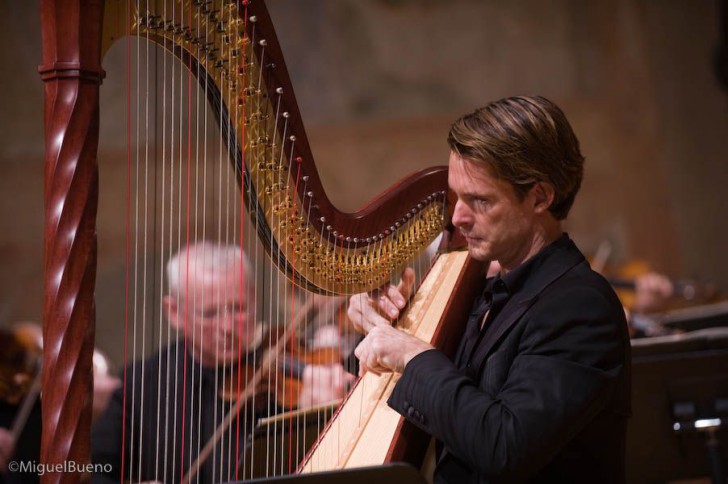 All of the concerts performed during the festival (except the Soós–Haags duo’s and the last one) included works by composer Benjamin Yusupov, in residence in Gstaad. Yusupov was born in the USSR, where he studied music (composition, piano, conducting) but has been living in Israel for two decades. Did Yusupov wish to get rid of the formalism that was fashionable when he was a student, or did his host country’s cosmopolite aspect influence him? In any case, Yusupov’s music swings between a very structured writing that emphasizes the instrumentalists and a neoclassic musical language in which Asian-style melismas are forced into the Western tonal system. The work performed by the Beraia duo is a cycle entitled Cultures from the Past, which follows the Silk Road and is conceived for four hands, each piece representing a stage of the journey. The Persia section was appealing, with is sonic investigation centered around the piano’s harp. The next two stages, played by the Bizjak (India) and Gerzenberg (Mongolia-Istanbul) duos were much less convincing. They comprise somewhat Eastern melodies coated in tonal and equal-tempered harmony. On February 7, the Camerata Europeana also performed Yusupov’s Gabriel for orchestra. The work highlights in turn each section of the orchestra and reveals, despite a lack of inspiration, a strong mastery of orchestration.

Each one of the editions of the Sommets Musicaux festival awards two prizes sponsored by the festival’s patrons. The Prix de la Fondation Scientia et Arte, which includes a CD recording contract with an orchestra (Stuttgart Philharmonic Orchestra, on the Onyx label) was awarded to the Bizjak duo. The Prix André Hoffmann (5,000 Swiss francs or $5,750) goes to the best interpretation of the residency composer’s works and was awarded to the Ping and Ting duo (Lok Ping Chau and Lok Ting Chau) from Hong Kong.