Riccardo Chailly, one of today’s greatest conductors, needs no introduction. Formerly conductor of the Deutsche Symphonie-Orchester in Berlin (formerly the East Berlin Radio Orchestra), the Concertgebouw Orchestra in Amsterdam, and the Orchestra Giuseppe Verdi in Milan, Chailly has been Gewandhauskapellmeister in Leipzig since 2005, that is music director of the orchestra and general director of the opera. Just before turning sixty on February 20, the Maestro agreed to an interview with ResMusica. 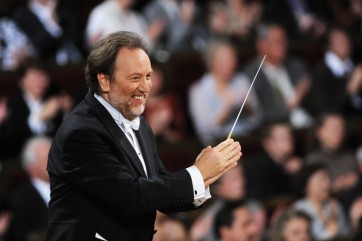 ResMusica: Maestro Chailly, you can choose not to answer this first question : Will you be a candidate to replace Sir Simon Rattle in Berlin in 2018?
Riccardo Chailly: Obviously I cannot answer this. Only fate and the Berlin Philharmonic will tell.

RM: You will be turning sixty this year. You have conducted all the repertoire, from Bach to contemporary music, with all the greatest orchestras. Are there works that you have never performed?
RC: In truth, I have conducted so many pieces. . . . I started very young: I was thirteen when I conducted my first concert. Now I come back to what I previously conducted. When I look back on my career, I see a lot of “sins of my youth.” For instance, the Madame Butterfly I did in Chicago when I was twenty-five. The way I see this work has changed entirely. I have indeed conducted almost all the repertoire, and especially the “pillars,” Mahler, Brahms, Beethoven and Bruckner. With hindsight, I feel a great satisfaction to have done all that. I can look back on my interpretations, go back over them, improve them, change them. It is a real privilege to be able to go back over one’s own work.

RM: But isn’t there a single piece that you have never conducted and that you would really like to?
RC: Sibelius. He’s a composer I have seldom conducted, and I have scheduled Finlandia and the Violin Concerto (with Ray Chen as a soloist) for the near future in Leipzig. I studied that concerto with Franco Ferrara in Sienna when I was an apprentice, but it has been more than forty years since I have addressed it. Another work that I have very seldom conducted is Tchaikovsky’s Symphony no. 6, “Pathétique”: my last concert featuring this piece was twenty-seven years ago! I remember the interpretation I did with the Berlin Radio Orchestra: it lacked maturity and I had not gone into it in enough depth. I have let this masterpiece sleep all these years; I have conducted Tchaikovsky so many times, but never the “Pathétique”.

RM: Speaking of going back over one’s interpretation, you perform Bach’s music on modern instruments. For these performances, are you taking into account what Baroque interpretations have brought to us?
RC: Yes, it is essential. We cannot ignore today the work of those amazing conductors, such as John Eliot Gardiner or Nikolaus Harnoncourt. Their contribution has not been only about performing the works using period instruments but also adding in-depth research on style and structure linked to an age-old tradition. I studied as much as I could to best reproduce this Baroque style with a modern orchestra. To do this with the Leipzig Gewandhaus Orchestra is a huge privilege: this orchestra is the only one in the world that never stopped playing Bach’s music – and especially his sacred works. There is no other orchestra that knows this music as deeply as this one. One can also feel this tradition in all of their interpretations of composers who have been inspired, directly or indirectly, by Bach: Mozart, Haydn, Mendelssohn. . . . Bach lived here, in Leipzig, for a long time. We carry on the tradition of executing Bach’s passions at the St. Thomas church, but with modern instruments.

RM: Let’s keep on talking about repertoire. You have introduced to every orchestra you have ever led in charge whole areas of repertoire that they had only seldom—or even never—played before (for instance, Puccini with the Royal Concertgebouw Orchestra in Amsterdam). What are the new works that you introduced to Leipzig?
RC: Verdi’s Un Ballo in Maschera and Puccini’s Manon Lescaut, two works that were missing from the Leipzig Orchestra’s repertoire. I have deliberately chosen those two masterpieces. Conducting Aida, Rigoletto, Tosca or La Bohème is an easy choice. The Gewandhaus Orchestra may have a strong lyric tradition, but it had never dealt with those two works, which are, for that matter, seldom produced in Germany.

RM: What is your policy regarding contemporary music in Leipzig?
RC: I would rather talk about duty than policy. If you don’t insist on conducting new works, people have no respect for your work as a musical director. What is difficult is to choose the works and the composers. As in everything, there is good and bad. Soon, in Leipzig, we will premiere an organ concerto written by Thomas Daniel Schlee. This will be the inauguration of the renovated organ of Vienna’s Musikverein. This work will be played along with Mahler’s Symphony no. 5.

RM: Now, 2013 is the Verdi/Wagner year. They are composers whose music you have advocated strongly. Are there still works that remain to be discovered?
RC: Yes, proof of this being the Viva Verdi CD, which just came out. It includes the ballet Jerusalem, the revised version of the Lombardi alla Prima Crociata for the Paris Opera. Verdi reuses themes from the overture, which is very tragic, and makes a twenty-minute ballet out of them. It was a kind of sketch for the ballet of his first great French opera, Vespri Siciliani. I have a lot of Italian friends who were quite startled to hear this Jerusalem ballet, which they didn’t know. Verdi is a hugely important composer, and they will always be new nuggets to be found, such as this ballet. As for Wagner, the pieces that are least known are his first operas. In Leipzig—where Wagner was born—we will premiere in loco Die Feen and Das Liebesverbot. And in September, for the season’s opening, the orchestra will play symphonic music of Verdi and Wagner on the Augustusplatz, the biggest square in Leipzig, close to the Gewandhaus.

RM: What are you projects for the future?
RC: With the Leipzig Orchestra, I will embark on a new Brahms cycle. Then, there will be another new cycle: Rachmaninov’s symphonic and concerto works, which will be recorded for Decca. I will also do again Mahler’s complete works, which will be recorded in DVD format. That will end in 2013 with the full version—as completed by Deryck Cooke—of the Symphony no. 10.

RM: What will be different in this complete works series compared to the first one, which you recorded in Amsterdam?
RC: I was young then! Barely over thirty. Today I am almost twice that age. I am less hotheaded and more levelheaded. Back then, I was under the influence of the great masters of the past, such as Mengelberg. I had studied his annotated scores, listened to his recordings at great length. When you are conducting Mahler’s works in Amsterdam, you cannot avoid Mengelberg. Today I feel much freer. In truth, this new Mahler cycle will be more personal, hence much more “fresh”.

RM: Don’t you plan to do any cycles of the great Italian composers of the twentieth century?
RC: On one of my last CDs is Victor De Sabata’s Le Mille e una Notte. It is a very difficult score for the orchestra, written under the influence of Ravel and Stravinsky, whom De Sabata often conducted. I don’t rule out conducting twentieth-century Italian music in the future. I conducted a piece from my father Luciano Chailly in 2012 in Leipzig to commemorate the ten-year anniversary of his death: the Missa Papae Pauli, dedicated to pope Paul VI. The effect on the audience was huge. And I plan to do one of his operas. He wrote a dozen of them, but his main lyric work is L’Idiot, after Dostoyevsky’s novel. Nothing is set in stone yet, but I’m thinking about it. Apart from that, we will do this year the late Luciano Berio’s Sinfonia, a major work. As for Maderna, I have no projects so far, but two years ago I conducted Grande Aulodia, a remarkable, youthful work. The early Maderna deserves to be better known.

Riccardo Chailly, one of today’s greatest conductors, needs no introduction. Formerly conductor of the Deutsche Symphonie-Orchester in Berlin (formerly the East Berlin Radio Orchestra), the Concertgebouw Orchestra in Amsterdam, and the Orchestra Giuseppe Verdi in Milan, Chailly has been Gewandhauskapellmeister in Leipzig since 2005, that is music director of the orchestra and general director of the opera. Just before turning sixty on February 20, the Maestro agreed to an interview with ResMusica.