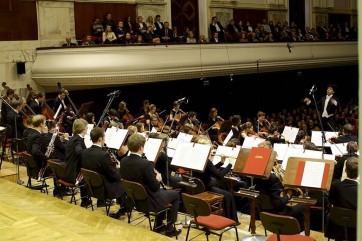 The Sinfonia Iuventus Orchestra is Poland’s youth orchestra. It was founded in order to ease the youngsters’ way into the world of professional orchestras. It performed at the festival in a concert starring two young musicians, winners of international competitions: the Azeri violonist Erzhan Kulibaev and the Venezuelian conductor Rafael Payare.

Payare is the winner of the Copenhagen Nicolai Malko conducting competition. Indeed, he possesses never-failing self-confidence and conducting technique. He undestood perfectly well the distinctive features of the overture of Beethoven’s Leonore no. 1, and charmed the audience with the Symphony no. 7. Despite the fact that the orchestra has to play tutti, Payare preserved his interpretative impetus and fantastic clarity in the way he put forward the work’s themes. Not that many conductors can show that much self-confidence and knowledge of the work. Only 32, Payare’s career looks very promising. He is much more than a mere clone of Dudamel; his interpretations are fresh and his conducting rigorous.
Violonist Erzhan Kulibaev has won awards at many competitions. He tried to reproduce the spontaneous, Italian climate of the concerto. Avoiding all exaggerated gestures, his Tchaikovsky is smooth and summer-like, even though his discourse was at times blunt. His interpretation was beautiful, but quite neutral: something more risky could have been better.

John Axelrod is a regular at this festival. He offered a very smart program, whose climax was Henryk Górecki’s Symphony no. 2 « Copernic ». Apart from the symphony no. 3, which is frequently played and recorded – by Axelrod hismelf with Sony, as a matter of fact – Górecki’s works are quite unknown. The Symphony no. 2 was composed in 1972. The score is written for a great symphohic ensemble, a chorus and two soloists. It includes two movements: the first one is made of powerful, dissonant, martial, and violent contrasts and peaks of tension, whereas the second one’s climate is clear, mineral, and crepuscular. Axelrod conducts this unique and spectacular symphony with panache. Together with Warsaw Philharmonic Orchestra and the Byalistock Choir, he finds many different sounds. Soprano Aleksandra Kubas-Kruk and baritone Robert Gierlach, the two soloists, looked especially committed to this work’s interpretation. 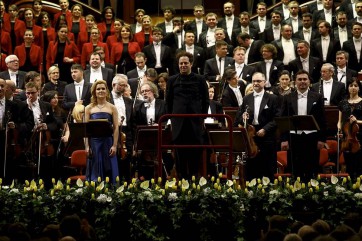 In a previous part of the concert, Axelrod had chosen the harmonic experiments of Ives’ Unanswered Question and the orchestral power of Richard Strauss’ Tod und Verklärung. He was able to make Ives’ vaporous tones clearer, and exploded the orchestral dynamics in Strauss’ symphonic poem.

As for the chamber music concerts, Julian Rachlin and Itamar Golan played all of Beethoven’s violin sonatas, and especially well the sonatas op. 12 and 30. To our pleasure, the artists appeared at the peak of their shape, after last year’s bad patch. Rachlin does not hold back and often takes risks, and his Beethoven is modern and radical, without anything superfluous. Golan responds to his friend’s interpretative path with focus. In their performance, they abandoned the trend of polished or embellished interpretations, and were acclaimed at length by the audience.

The Belcea Quartet is commonly viewed as one of today’s best quartets. They made a show of the quartets op. 59 no. 1 and op. 131. Their technique is exemplary, and they understand each other very well. They managed to bring out Beethoven’s genius by adding an almost stifling dramatic touch.

The Artis Quartet created an altogether different atmosphere in the op. 18 and 59. It sounded pretty, but the performance left us quite unmoved. The interpretation was too consensual and its smooth vivacity just a façade that did not make the numerous false notes and hitches disappear.

The Beethoven Festival remains an important European music event. The audience was very young, including even a lot of children, even at the chamber music concerts.

The 2014 Beethoven Festival will host, among other things, the annual gala of the International Classical Music Awards (ICMA). On 12 April 2014, the Sinfonia Iuventus will play with the winners.