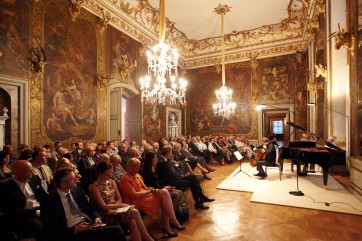 In 1993, violonist Kai Vogler and cellists Jan Vogler and Peter Burns were looking for a place in Saxony where they could hold a music festival on the model of the Marlboro Festival in the United States. Indeed, these musicians had played there and had very much liked the atmosphere and the concept behind that festival, located in bucolic Vermont. In the end, they chose the Moritzburg Castle, a masterpiece of Baroque architecture built by King Augustus II the Strong, a visionary monarch of Saxony. Throughout the years, the festival has become a touchstone for chamber music, and the related concerts take place in key locations in and around Dresden.

Beside high-level chamber music musicians and attractive program, the festival stands out also because of its academy, in which experienced professional soloists supervise or perform together with young performers. There are around fifty such “academicians.” Together, they also comprise the orchestra that performs the festival’s opening concert.

The concert that took place in the ever-majestic Frauenkirche in Dresden offered a beautiful combination of all that makes this festival unique as the soloists of the academy and of the festival united to perform Wagner’s Siegfried Idyll. The young artists’ enthusiasm and their elders’ experience complemented each other in an interpretation that was at the same time youthful and rigorous in unfolding the work’s sequence of themes. Without transition, a team of soloists led by violonist Mirijam Contzen tackled the hit that is Schubert’s Quintet in C Major. This score, a masterpiece of chamber music, was brought to a peak in the quality of dialogue among the soloists by these five musicians as they challenged each other’s energy and dynamics. 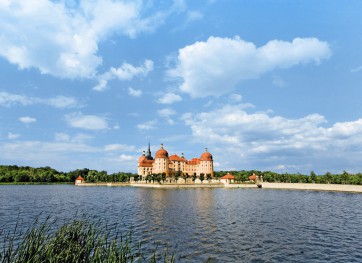 The next day, on a summer evening, was a mini-marathon of chamber music, taking place in Monströsensaal, a room in Moritzburg Castle that is as majestic as it is impressive. With its baroque frescos, this room is indeed a special setting for any concert.

Benjamin Schmid is a famous soloist in German-speaking countries and a musician of insatiable curiosity. He offered a showdown between Frank Bridge’s misty, fin-de-siècle world and Liszt’s pure virtuosity. Schmid was not entirely convincing here: in the Bridge, there was a lack of appropriate style, and his intonation was often uncertain in the Liszt. But Schmid’s panache and risk taking make it up for this. Pianist Arianne Haering assisted him well, attentive in her accompaniment to the contrasting spirits of these scores.

As a main course of the concert, after the intermission the musicians made their way into very different worlds. As an introduction, the suite from The Marriage of Figaro, adapted for string quartet by Jan Vogler, made an obvious impression. Even downsized to only four bows, this work by Mozart is a tremendous exercise that allows the musicians to shine. With a quartet comprised of such high-level chamber-music experts, it was pure delight. The transition into the suffocating atmosphere of Schoenberg’s Quartet no. 2 was brutal. The technical and musical level of the soloists allowed them to bring out all the varying facets of this demanding score, whose modernism is elegant, willful, and uncompromising, but nonetheless fascinating. A real discovery was the young Alexander Sitkovetsky, who, leading this string quartet, breathed life into the music in a way that has rarely been heard before, leading his fellow musicians to a peak of contrapuntal tension. Though the score requires the singer only in the last two movements, soprano Juliane Banse’s commitment and experience were remarkable. Her voice wended its way into the twists and turns of the spells cast by the instrumentalists before getting lost in the ghostly shadows of the castle.

As a conclusion, all these virtuosi joined together with pianist Antti Siirala to play Dvořák‎’s Piano Quintet in a frenzy of musical fireworks. In addition to each musician’s individual qualities, the harmony of their work together was remarkable, and, without any showing off, they unquestionably served a common, insightful vision of the music.

Far too unknown in the French-speaking world, the Moritzburg Festival is definitely a landmark event for the quality of its programming and for an atmosphere in which music and art are bound together. With more than twenty years behind it and led by the ever-energetic and communicative Jan Vogler, this festival can always be relied on to be full of surprises and discoveries.