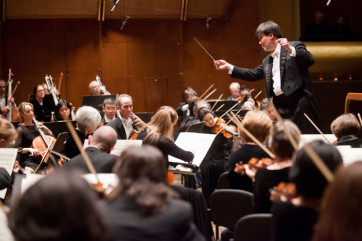 Alan Gilbert, music director of the New York Philharmonic Orchestra, will be on tour in Europe in late April. As usual, he will conduct unconventional programs, from Ravel to a world premiere of Péter Eötvös. ResMusica meets one of the most versatile conductors of our time.

« Today musicians and musical organizations as a whole need a paradigm of the orchestra-conductor relationship that is different from what was the norm even twenty years ago. In fact, I suspect that the autocratic model wasn’t even optimal at the time it was prevalent. »

ResMusica : This year you will be on tour and perform some masterpieces of the 20th century. Why did you choose this program?

Alan Gilbert : The most important thing is for us to perform music in which we believe, whether it’s a masterpiece from the past or a world premiere. With the right programming combinations and the sincerity with which we present all works, old and new, we will communicate the notion that we perform new commissions not out of obligation, but because we want to. That said, I do believe in the utter importance of helping today’s composers continue doing what they do, because composers are the real heroes in music.

RM :  You will perform a world premiere by Péter Eötvös in Cologne. Can you explain  this project?

AG : The simple answer is that they asked us to present a premiere there — orchestras rarely giveworld premieres on tour– so we were honored by this request. It means that what we’ve been doing in New York is now considered “normal,” in the best sense of that word, and that people abroad have noticed that supporting the work of contemporary composers has become part of the Orchestra’s current identity. It is extremely gratifying to be able to show the fullness of our persona as a cultural and artistic force on this tour. The idea of our commissioning a work by Péter Eötvös was proposed by the late Henri Dutilleux who, when told he would be our first winner of The Marie-Josée Kravis Prize for New Music, decided to share the proceeds with other composers, andworked with us to select those who excited both him and us. When KölnMusik asked us to give a world premiere, we mentioned this piece and  decided to collaborate together on the commission.

RM :  Your programming and initiatives have been warmly welcomed. In the New Yorker, a journalist compares you to Pierre Boulez,   former music director of the orchestra and also an adventurous programmer. How do you feel about this comparison?

AG : Pierre Boulez is one of the most distinguished musicians in the world and a real force for progress throughout the 20th century and into the 21st. It is an honor to be compared to him, as he is one of my heroes.  I really admire how uncompromising he was, how he stuck to his guns to do what he believed was musically right, despite the resistance he encountered. He has already begun to be appreciated more thoroughly than he in earlier stages of his career, and I know that this acknowledgment of his contributions will only continue to grow. The paths he began to forge helped break ground, making it possible for me to aspire to conceive the projects that have been considered innovative but have been embraced both at home and abroad.

RM : You have launched numerous initiatives, such as “360°”. Do you think that in the 21st century, the music director of the NY Phil should have a 360° strategy? In other words, should he be someone who not only conducts the orchestra, but is also a designer of ideas?

AG : Yes. A leader must offer a consistent stream of visionary thoughts to galvanize the environment both within the orchestra and in how it is perceived externally, to maximize the expectation that something important is happening. But it goes further than that. Ideas mean nothing until they are realized ; at the end of the day, it doesn’t matter what ideas you conceive unless you are able to present them with quality or passion.

RM : During your tenure, the orchestra has become considerably younger, with the recruitment of new musicians to replace retirements. How did you manage this transition?

AG : One fact about orchestras is that musicians retire, and that you fill those positions. We hold auditions and engage the best musicians  we encounter. 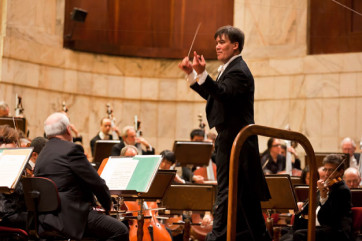 RM : You have succeeded some of the grand figures of conducting, namely Kurt Masur and Lorin Maazel. They were very great conductors, but they were musicians of the twentieth century, from a time when the conductor was intimidating. You have the image of a musician who is very nice and modest. Is the « cool attitude » a part of the twenty-first century identity?

AG :  Today musicians and musical organizations as a whole need a paradigm of the orchestra-conductor relationship that is different from what was the norm even twenty years ago. In fact, I suspect that the autocratic model wasn’t even optimal at the time it was prevalent.

RM : You have initiated a series of concerts available for download on iTunes. How did this idea come about? What was the response of the international audience?

AG : I am proud of our download series, in terms of the range of music that we’ve been making available, of the quality of the Orchestra’s performances, and of the quality of the audio. It is a remarkable achievement, one of which everyone involved can be proud. It really made sense to make our performances available in the format that people use today, and producing the releases ourselves allows us to have control over the selection of repertoire, as well as of the production and dissemination of the recordings. It was a natural step to take; combined with our self-produced radio series, streaming, and other ways of distributing our performances digitally, we reach about 50 million people worldwide.

RM :  With the NY Phil , you have conducted and recorded a full Nielsen cycle. Can you tell us about your links with this composer?

AG : My years in Sweden brought me closer to Scandinavian music, and I’ve grown to love it and to understand its incredible range. I believe that many people think only of Sibelius and Grieg, and now, I hope, Nielsen, but the truth is that there is a wealth of wonderful music from this region. Nielsen is a true master, and his music occupies an important place in my heart. He comes out of a strong Germanic, symphonic tradition — I have often coupled his music with Beethoven’s on a program — but his music is so distinctly Danish, with an iconoclastic, craggy edge. The fact that Nielsen’s music has tended to be neglected in the concert hall, certainly compared to works by Sibelius, has always baffled me.

RM :  Despite multiple efforts, Nielsen is still marginalized in French-speaking countries. What do you think would convince us to listen to his music?

AG : Nielsen’s music is incredibly accessible and beautiful, and brilliantly written for the orchestra. It takes a straightforward, familiar approach to symphonic form and turns it into something uniquely powerful, and immediately compelling. There is craft, of course, but also incredible wit, as well as wisdom and power. In my experience, audiences take to his music with an immediacy that is striking.  A response I have often heard from people is, “Why don’t we hear more of this music?” Let’s not forget that Sibelius wasn’t so well known until 30–40 years ago, when musicians (Leonard Bernstein, for one) started advocating for him. Nielsen’s time has come, and it wouldn’t surprise me if more and more people started to think of him as an even greater symphonist than Sibelius — and that’s really saying something!

RM :  When you began your carreer as a conductor, you were music director of the Santa Fe Opera. Since then, opera has become a smaller part of your activities. Do you miss working in opera?

AG : True, I have been able to spend less time leading opera, and I do miss it. I loved leading Don Giovanni at The Metropolitan Opera this winter, and would relish the opportunity to do more. However, during my time at the New York Philharmonic I have really enjoyed the opportunities we have created to present stagings of operas — Ligeti’s Le Grande Macabre, Janáček’s The Cunning Little Vixen, and the Act I Finale in Don Giovanni –as part of our Philharmonic 360 concerts. They were wonderful opportunities to embrace these remarkable scores, performed as only the Philharmonic can, in fully realized, imaginative productions that were feasts for the eye, as well as for the ear.