All-Finnish with John Storgårds and the Helsinki Philharmonic 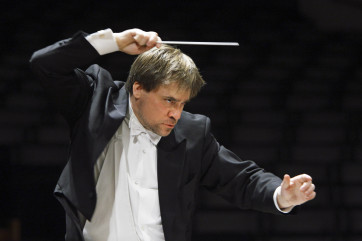 Storgårds was able to find the elusive balance between presence and clarity.

Although considered one of Finland’s most important modernist composers, Paavo Heininen is perhaps better known as the teacher of some of Finland’s greatest living composers, such as Lindberg and Saariaho. Commissioned by the Helsinki Philharmonic Orchestra, Heininen’s Symphony No. 6 received its world-premiere performance on this program.

The opening moments of this four-movement work seemed to suggest typical modernist fare–short, jagged fragments, angular textures, and avoidance of any kind of sustained consonance. However, once one got past these initial impressions, this symphony impressively demonstrated Heininen’s ability to convey both flow and direction over long stretches. Particularly noteworthy were the extended journeys to the work’s climaxes, which displayed carefully controlled and almost imperceptible accumulations of energy. Attentive listening also revealed a certain degree of playfulness, which provided a welcome contrast to the work’s more austere or serious moments.

Next on the program was the Finnish premiere of Rautavaara’s Balada. Scored for orchestra, chorus, and tenor soloist, this 20-minute work is the composer’s latest work based on the poetry of the Spanish poet Lorca.

The work’s opening was unmistakably Rautavaaran: images of vast and tranquil horizons, painted with soft and glowing colors. The choral writing was rather conservative, but effective. The work’s central section was impassioned and tempestuous, led by a declamatory tenor solo (brilliantly sung by Mika Pohjonen). While this work likely presented few surprises to listeners familiar with Rautavaara’s recent output, the music’s uncomplicated beauty was nevertheless attractive.

The program closed with Sibelius’ Symphony No. 6, making the penultimate entry in Storgårds’ cycle with these forces. In the work’s opening, Storgårds was able to find the elusive balance between presence and clarity, leading up to an ideally paced central section. Balanced woodwinds were matched to the gently vigorous string textures in the second movement. Storgårds maintained a focus on Sibelius’ orchestral details in the final two movements without sacrificing excitement.