Joseph Moog, a young pianist but already a double winner of the International Classical Music Awards, recently released a disc devoted entirely to the work of Franz Liszt. On this occasion we spoke with him about this achievement. 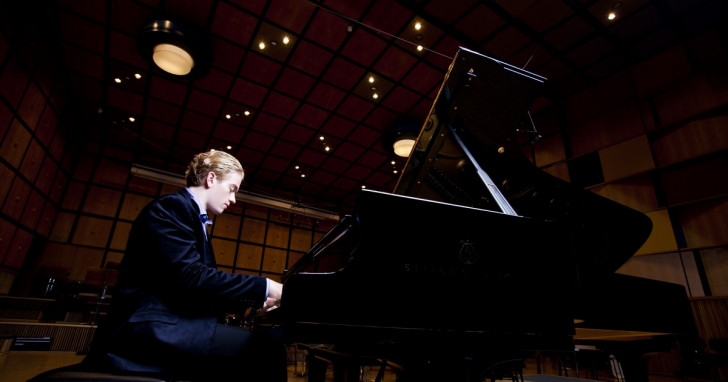 ResMusica: What were your goals when you were building the program on your Liszt album?

Joseph Moog: Liszt is many things, but in my opinion all these combined uncover a true philosopher. In order to portray this very personal vision of Franz Liszt and his art on just one disc I needed to choose some of his milestones and the Sonatas and Legends formed a wonderful contrast. All the selected works mark a change of direction within Liszt’s oeuvre: the Dante Sonata was one of the first pieces representing a new, literally orchestral use of the piano. The Sonata in B minor is the most interwoven piano composition and brings us to the crossroads of program and absolute music. The Legends are two of the finest examples for his spirituality and his preparation of musical impressionism. The Csardas obstiné is both, a bonus piece and proof of another important column of Liszt’s life: his Hungarian roots.

RM: How do you perceive these Liszt scores? What was your interpretative approach?

JM: With Liszt’s musical language being orchestral, many of his signature features can be approached from a conductor’s perspective: the rather modern, ‘non misurato’ notation of recitatives as seen in the two Legends, the long development sections, prominently displayed in the Sonatas and last but not least the art of variation, as in Vallée d’Obermann. Knowing Liszt’s versed use of the full orchestra one can easily imagine some of the piano works in orchestrated form. I find it highly interesting to study the scores of his Piano Concertos over and over again, because it is here, he elegantly replaces the traditional sonata form and transforms it into the one movement form so typical of symphonic poems. This is the base of my approach to Liszt’s piano music in general and it helps me both intellectually as well as from an interpreter’s point of view.

RM: What elements do you find most striking in Franz Liszt’s piano music?

JM: Liszt lived a long life and it was far from the average of his time. I am particularly fascinated by the incredible development of his musical language. For me, it is the improvisational qualities of his piano music that are most compelling. If performed well, his music creates the illusion of being invented the very second you hear it.

Apart from the revolutionary use of the instrument, in his later years his faith led him to develop a new musical style emphasizing more the atmosphere than the structure of his creations, which could count as a – though simplified – definition of core values of impressionism. The religiousness inspired his spiritual qualities and there are a few impressive results, such as Les Jeux d’eau à la Villa d’Este or the Legends.

I always feel his impact on the following generations of composers has been rather neglected and to me, Maurice Ravel should be named as a fine example. Certainly, Claude Debussy can be an exquisite companion when building recital programs, but Ravel’s Gaspard de la nuit makes an even more intriguing choice. To a degree I can’t help imagining a hypothetical continuation to Liszt’s music and this legendary triptych comes excitingly close to it.

RM: On your CD, you mix contemplative works and virtuoso ones. In your opinion, was Liszt particularly a virtuoso and then only a poet, or did he combine these two particularities in his compositions?

JM: Franz Liszt has always attracted me with an almost magnetic potency. Both his keen music and his iridescent personality have fascinated me since that day of my childhood I first heard Lazar Berman’s DG recording of the Années de pèlerinage. There is no question his music still unfolds all its magic today, but it was the diverse and comprehensive life behind the oeuvre that led me to record my most recent Liszt album. The more closely I dealt with his music and life, the more I was convinced that he was driven by a lifelong search. This could explain the enormous contrasts drawing through his biography as well as his music: from Casanova to priest, from romanticism to impressionism, from sensuality to spirituality.

Inspired by the Zeitgeist, by Goethe and Dante he set the inevitable coexistence of our lives’ counter poles to music: light and dark, yin and yang, or Heaven and Hell.

RM: As is well known, although Liszt did not give a precise program for his B-minor Sonata, he must have been inspired by the story of Faust. Do you try to make this story perceptible in your interpretation?

JM: Having spent a lot of time with this masterpiece it taught me that the Sonata in B minor is without any doubt the most consequent, compelling and miraculous among his compositions for piano. This is the foundation of my understanding of this work and it gave me a natural guidance to its architecture. Although there is no additional program or story behind the sonata, it is quite a fine example of programmatic music in my opinion. Note the individual motifs almost as reoccurring characters, a technique widely known from Wagner’s operas for example. This clearly tells us about an almost visual creation of an action between characters. I strongly believe that Faust must have been a major inspiration and like in his Faust Symphony, Liszt uses the single-movement form and anticipates the symphonic poem as seen a few decades later with Richard Strauss.

Following the musical motifs helps understand when Liszt merges and combines musical material and realizing this process very carefully it supports the awareness of the Sonata as a giant whole.

RM: What repertoire are you working on during the confinement and what are your future recording projects?

JM: There are quite a few things I’m currently working on and there is a long list of works and composers I am very much interested in, for instance Busoni’s Piano Concerto, Szymanowski’s Piano Sonatas, or to give a very different example, the art of embellishments referring to Couperin, Rameau and Scarlatti.

Regarding the recordings, there are both finished albums as well as recording plans and the next CD will be published in autumn 2020. Unfortunately, I am not authorized to tell more about the repertoire yet, but I can say it will be another piano concerto, this time in combination with solo works.