The last time Alisa Weilerstein was invited to perform in Paris with an orchestra, it was in 2010 and she was virtually unknown. Three years later, her style is as expressive and intense as ever, but this time she tours Europe to promote her debut album with Decca, featuring the Elgar cello concerto conducted by Daniel Barenboim. ResMusica interviewed Alisa Weilerstein in Paris, discussing the influence of Jacqueline Du Pré and Barenboim, whether the 1950’s are better than the 2010’s, and also why she does not sit still when she plays music! 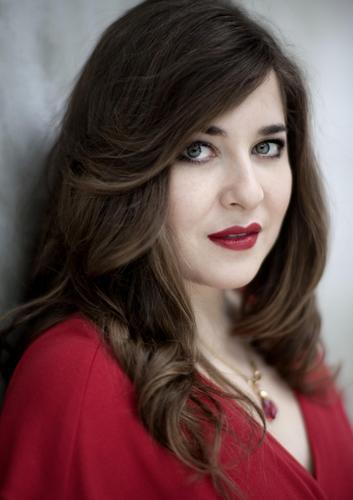 « The programming is conservative and stuck »

ResMusica: Your debut album features the concerto by Elgar, whose discography has been dominated by Jacqueline Du Pré since she recorded it in 1965. Daniel Barenboim made an emblematic recording with her in the mid-70’s. How did this album happen?
Alisa Weilerstein: Playing this concerto with Maestro Barenboim was not something I asked myself. When I met with Barenboim for the first time, it was upon his request in 2008 in Milan. I had tried to meet with him before, but it did not work, it was a dream to play for him. We worked 3 hours on the Dvořák’s concerto. In 2009, he asked me to come to New-York to see him again.

RM: How did you have access to him?
AW: I was introduced to him by Avery Fisher, who suggested I play the Elgar concerto. I did not want that, as Jacqueline Du Pré was my child hero: when I was 10 I was listening her recording almost every day, I played it thousands times! Avery Fisher insisted as Barenboim was the most knowledgeable conductor on this concerto. When I played it through in front of Barenboim, it was the time I was most moved in my life. He made a few comments, and then he offered me to play the work next year on May Day in Oxford with the Berlin Philharmonic Orchestra for the Europa Konzert. It said it just like that.

RM: At the end, you managed to define your own approach of the concerto.
AW: When I was 12, I stopped to listen to her recordings, to make my own view. For the same reason, I don’t listen to recordings of the works I am playing.

RM: This Oxford concert has been released on DVD by EuroArts and you release your emotion at the end of the concert. Was it difficult to control your feelings and stay focused?
AW: For all the obvious reasons, to play this work with Barenboim and the Berlin Philharmonic is any person life dream. It was so intense, but this helped me to focus even more. What I did not know was that May Day is a big celebration in Oxford for the students all night. My hotel was on the main street! I am a good sleeper, but I could not get any sleep, the concert was at 10 am and I had to be there at 8 am! I rested afterwards…

RM: After the DVD, now the CD…
AW: I was initially in discussion with Decca and Sony. I signed with Decca, and the question of the works to be recorded came after. I suggested to Maestro Barenboim, shyly, “would you be willing… possibly…”. He accepted and he suggested to add the concerto by Elliott Carter.

RM: These two concertos have very little in common…
AW: I find that pairing a known work with new music is interesting, these concertos are dramatically opposed and show a complete different side of the cello!

RM: Any ideas for the next albums?
AW: The next album will be Dvořák’s concerto with the Czech Philharmonic Orchestra conducted by Jiří Bělohlávek, and the following one will feature pieces for cello solo. The cello repertoire is too small for me to have favorites.

RM: The Shostakovich’s concertos maybe?
AW: I played the first with Paavo Järvi and the Orchestre de Paris in Russia, on my 30th birthday. It’s an anecdote, but when I played the Elgar concerto with the same orchestra in 2010, it was on my 28th birthday.

RM: Back to Barenboim, he is definitely not a neutral personality. He dared playing Wagner in Israel and has been much criticized for this. He created and conducts the East West Divan Orchestra, which is a bridge between Palestinian and Israeli musicians. These strong positions, is this something you prefer to stay away from?
AW: I admire this immensely, I respect it. I would love to play with the Divan Orchestra. I did play among the musicians, but it was just for rehearsals.

RM: I have seen you performing the Elgar concerto in Paris in 2010. I have to admit I did not know you at that time, but I was immediately impressed by the expressiveness of both your sound and the way you were moving.
AW: Expressiveness is what I am naturally. When I was extremely young I was trying to play works that were beyond my level, and I had to work on tension habits. I was much wilder than what I do now. I don’t think I played if I sat still. I am always trying to use my body to get the best of the instrument. Why do I move like this? I don’t know.

RM: You are American but your style of interpretation sounds more European. In the US, the musicians would tend to focus on brilliance, precision, sharpness, while in Europe…
AW: The USA is a very large country with big differences between places which are thousands of miles away, like Europe. I don’t like generalizations. I don’t see it this way. I see difference between individuals, not people.

RM: You have been invited to play at the White House to play at a concert organized by Michelle Obama, and Barack Obama attended as well. Beyond the recognition for yourself, what does such an event say about the interest of the elite of the nation in classical music?
AW: I am a huge fan of Obama, I was very happy he was reelected…

RM: …You don’t mind I mention this in the interview?
AW: No, people know what I am thinking. The Obamas brought the music back to the White House, not only classical music. There was more news about classical music in the media because of this reception than I ever seen. It was a huge through to be there.

RM: Are you concerned by the fact that the core audience of classical music is ageing, and that the response from orchestras and institutions does not respond to this challenge?
AW: Yes, the programming is conservative and stuck. But composers nowadays are successful in different styles. In the US, people are open to different styles in contemporary music. The Sistema in Venezuela has demonstrated that music is not only a great art form but a social changer. And it is spreading in the US, in Scotland, in Croatia, I suppose in France as well…

RM: In France? No… We were very hopeful when Paavo Järvi started as musical director of the Orchestre de Paris, we thought he would bring change in the programming, but we have not seen much happening yet… Will you play with Järvi in Paris?
AW: Yes, the Prokofiev concerto. It’s not a contemporary piece of music, but it is already something…

RM: Do you plan to champion contemporary composers?
AW: Yes, I work with four composers who have nothing in common but are all very successful, Matthias Pintscher – I will create his concerto Reflections on narcissus in 2015, Lera Auerbach, Joseph Hallman and Osvaldo Golijov. Osvaldo likes to work with the performer, he had me to play for him Bach, Kodály, and then he writes. Joseph is among my best friends.

RM: Your career looks focused on the US and Europe, what about Asia?
AW: I play regularly, I toured four weeks there, in Hong-Kong, Australia, but it’s very far away…

RM: You are on social networks, Facebook, Twitter, as anyone would expect. What is your take on these tools?
AW: I have one profile for publicity, and another one for my friends. I hope it humanizes the artist.

RM: Overall, you feel good about the future of classical music?
AW: The time we are in is very interesting. In the 50’s, you had to compose in only one style. Today there are so many options!

The last time Alisa Weilerstein was invited to perform in Paris with an orchestra, it was in 2010 and she was virtually unknown. Three years later, her style is as expressive and intense as ever, but this time she tours Europe to promote her debut album with Decca, featuring the Elgar cello concerto conducted by Daniel Barenboim. ResMusica interviewed Alisa Weilerstein in Paris, discussing the influence of Jacqueline Du Pré and Barenboim, whether the 1950’s are better than the 2010’s, and also why she does not sit still when she plays music!