In May 2013, La Monnaie will feature Cosi Fan Tutte in the staging by Michael Haneke, freshly honored by an Oscar Award for the best foreign film for Amour. ResMusica interviewed the Italy-based Argentinean tenor Juan Francisco Gatell who interprets Ferrando to find out more about Haneke, the relationship between opera and football, and also what are the dreams of a young bel canto tenor today. 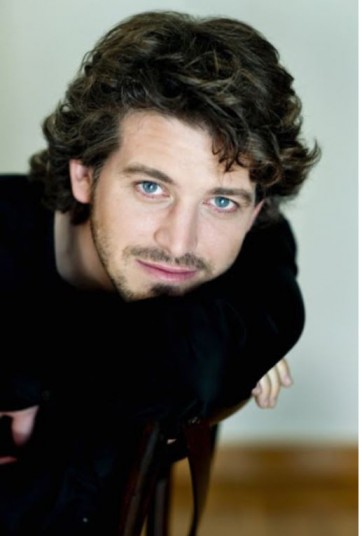 “Everybody sees opera singers like Pavarotti, dressed the same. We are normal people!”

ResMusica: What events triggered you to become a tenor?
Juan Francisco Gatell: There were no musicians in my family, but music was everywhere in our house, and also in our city of La Plata. With many students involved in music, we could hear choirs, opera, pop, tango… All my brothers went to the conservatoire, two sisters became classical dancers. I wanted to sing when I was 6 or 7, but they preferred that I play the piano. When I was trying to decide what to do – I was split between becoming a pilot, an archeologist and music.

RM: Why did you leave Argentina to settle in Italy?
JFG: I was happy singing in a choir, but always people were telling me I was singing well. So I went to Madrid to improve my education. One day I was paid to sing in a choir at the Liceu: a choirmaster noticed me and he invited me to Italy, in 2003. I did a few competitions, it was a step by step process, I would say my professional debut was in Rome in Barbiere in December 2005.

RM: Who had the biggest influence on your career? You performed with Riccardo Muti for instance, did he make a lasting impression on you…
JFG: Overall I think my wife has had the deepest influence, when she supported me to leave the choir and start a career. It was a dangerous choice for the two of us with a baby. We met in the conservatoire in La Plata. She is half-Italian like me. Musically, of course performing for Maestro Muti was a marvelous opportunity – he is one of many great musicians who have made a lasting impression on me.

RM: Do you go back to Latin America for performances?
JFG: My musical education was in Argentina but nobody really knows me there. I have been singing in Spain and even more in Italy. In Latin America I have only sung in Peru and Chile, I would like to sing there more often.

RM: You were in Argentina at the time of the big financial crisis that your country faced in the 2000’s, did this event play a role in your decision to move to Spain?
JFG: No, the decision to move to Spain was taken before the big crisis. My father is Spanish, and little by little we came to Spain in 2000. But yes the crisis had an influence on me – I was 21, trying to live my own life. It was hard to find a job, and even worse as a singer.

RM: And now you face the economic crisis in Italy! Does it impact you as well?
JFG: I work more than before because my career is starting. It is a very difficult moment for everybody, there are fewer jobs, not like in the 1990’s. As young artists, we are given more opportunities, famous people have no problem, the difficulty is for people in the middle. Also as young people we are most open to push ourselves to the limits. When your career is established, you  may be able to take more risks.

RM: Did you resist demands from the staging director?
JFG: There are limits but I will not say no, I will try. Once I had to jump out of a window and step into a little chair. It broke and I was hanging at the window, we were lucky the window did not fall down!

RM: Michael Haneke, the director of Amour chose to come to Los Angeles for the Academy Awards rather than to attend the premiere of his new production of Mozart’s « Cosi Fan Tutte » in Madrid, which will be featured at La Monnaie in May. How was his directing, compared to others, and did he celebrate this award afterwards?
JFG: It was fantastic to work with him. The whole period of rehearsal was 2 months and it was really hard. I had to be really concentrated during eight hours per day for five minutes. He has a different method, he works like a movie director. We could not relax at any moment, had to do 5 minutes 20 times in the same day at the maximum of concentration.

RM: Would you do it again?
JFG: Maybe we could get the same results with less work, but to get this result I would do it again.

RM: Did you celebrate when he came back with his Oscar?
JFG: We were suspecting he would get an award, especially the best movie. We had a dinner, he was happy, we were happy. It was clear he had to go to Los Angeles.

RM: This production has been recorded…
JFG: They recorded the 3 days I was sick! I was tired, I sang everything but it was not coming easily, the high notes were tight, my throat was inflamed. I am not the kind of person who asks to re-record, so I hope they will pick up the best moments.

RM: You have been singing with Riccardo Muti. Do you find more difficult to sing under the baton of the most famous conductors?
JFG:  Maestro Muti is very demanding in rehearsal but in performance it is easier because he is a major conductor. Yannick Nézet-Séguin is fantastic as well, I feel very comfortable with him. He will be a big one.

RM: You are a football fan. Which club is your favorite and why? Do you see any parallel between opera and football, in terms of excitement it creates in the audience for instance?
JFG: I am devoted to football! My favorite team is Gimnasia y Esgrima La Plata in Argentina. I watch their matches at 3 in the morning on the internet, and I am more fanatic since they are in 2nd league for three years. I like Barcelona because of my father, who is Spanish. I love going to games, but sometimes I am low on voice afterwards. My wife knows I am crazy. I was in Salzburg and my team played to stay in the first league. We scored two goals in the last two minutes and so we could stay. I had to watch this. People were crying in the stadium, and I was like them.

RM: Do you find a connection between football and bel canto opera?
JFG: I find a lot of connections, people are in tears with football and singers on stage can feel like football players, the same capacity to resist the pressure. You must sing very well, you need to have the character. I brought some friends of mine in Argentina and Madrid to the opera and they were surprised to like opera performed on a stage.  They were people who don’t know opera and had never been to a live production before.

RM: You are specialized in bel canto, which is the most popular type of repertoire in opera, and tenor voices are in high demand. Do you dream to broaden your scope, or do you get excited by the fierce competition with historic singers and stars of today in this repertoire?
JFG: I am happy with what I sing, it’s perfect for me. I like bel canto and classical, Mozart, better than verismo and melodrama. I like this kind of lightness, which does not take everything that seriously. If my voice asks for different roles, then yes.

RM: Your next important appearances?
JFG: In Brussels in May, in the staging by Haneke. And then in Los Angeles in Falstaff, it’s not bel canto but it’s Shakespeare and a good combination with Verdi.

RM: Is there a project you would dream to achieve?
JFG: I would like to make people know that opera is not elitist, not for connoisseurs and you can enjoy it without being a connoisseur, like the cinema. I would want to change the way people see opera singers. Everybody sees opera singers like Pavarotti, dressed the same. We are normal people, opera is a normal way of communication. We need to change the look of opera. We need exciting staging with wonderful music, and then how could you not like it?

RM: What are your favorite directors?
JFG: I would say Michael Haneke, Damiano Micheletto, Michal Znaniecki, Bartlett Sher, Ruggero Cappucio, and Fabio Sparvoli… I forgot someone perhaps…In their staging, whether modern or traditional, we act. We act as though we were in a theatre. This is what I call ‘modern direction’ and goes beyond the era in which the action is set.

In May 2013, La Monnaie will feature Cosi Fan Tutte in the staging by Michael Haneke, freshly honored by an Oscar Award for the best foreign film for Amour. ResMusica interviewed the Italy-based Argentinean tenor Juan Francisco Gatell who interprets Ferrando to find out more about Haneke, the relationship between opera and football, and also what are the dreams of a young bel canto tenor today.