American masterworks by Bo Holten, the best introduction to Delius

Frank Delius’s enthusiasts often come up against the same questions: how to help his music to get played, which pieces to put forward so we can hear it again in concert halls? 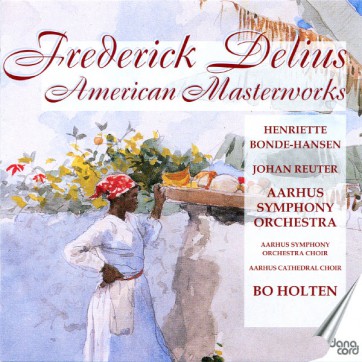 His work sings of love, sensuality, nature, and deals with serious, timeless, deeply touching themes such as racism (in Koanga) and the loss of the beloved (in Sea Drift).

One of the reasons Delius is not very well-known today is that the discography of his works, though abundant, mainly features recordings from the United Kingdom engineered in a bland, almost puritanical way. They are not likely to generate enthusiasm. The situation is especially difficult for his operas and vocal works, for which there are not a convincing combination of great voices and great conductors to be found. From an orchestral point of view, Thomas Beecham’s recordings are unquestioned references, but the style of his singers is dated and cannot be considered as a reference anymore.

In this context the contribution by the Danish conductor Bo Holten is particularly welcome. He took up five different themes in five different albums, each dedicated to a different country: Norway, Denmark, England, France, and the United States. In this way, he highlighted the composer’s cosmopolitanism. Being a choral conductor, conductor, and composer, Holten has made soloists, choirs, and orchestra work together better than anyone, eliciting from them greater consistency, presence, sensitivity. Interestingly enough, it is another choral conductor, David Hill, who has shown similar qualities in A Mass of Life (Naxos). Would mastering choral expression be the key to mastering Delius’s art?

The opera Koanga was among our favorites recordings in the tribute box set issued by EMI for Delius 150th-anniversary. Charles Groves’s interpretation there is convincing, but Hotlen’s (admittedly, for only half of one act) shows more warmth and commitment, with a beaming Henriette Bonde-Hansen as Palmyra. The orchestra is by turns chamber music–like and lyrical, and the whole project provides an obvious demonstration that this music’s potential is still to be fully explored—and that Holten should record the entire opera.

Appalachia has been recorded in a seminal version in 2011 by Andrew Davis with the BBC Symphony Orchestra (Chandos). The relatively modest Aarhus Orchestra does not shine the way the BBC Symphony does, but it possesses a greater sense of intimacy and feeling. The choice between those two versions must be made on a personal basis.

And then comes Sea Drift, Delius’s masterpiece and the logical climax of this series of recordings. The discography of this work is abundant, and many great conductors (Beecham, Mackerras) and voices (Thomas Hampson, Bryn Terfel) are part of it, but none of the versions is definitive. The failure of the recent version by Stefan Sanderling (Naxos) shows that this work is still difficult. Holten’s version is surprisingly slow, and Johan Reuter’s Wagnerian style (he was very impressive in Wotan in Munich in 2012) is a priori far from Walt Whitman’s poem, which speaks of a young boy who daily watches the nest of two birds on the seaside—one day, the female bird will not return, and the male will be left desperate and alone. But Holten has an attention and a love for the piece that enable him to conduct the work in a captivating way. For each of the separate elements, we could already find a great version: Gordon Clinton/Beecham (EMI) is the most bewitching; Thomas Hampson/Mackerras (Decca) is the closest to the atmosphere of the poem; and Bryn Terfel/Hickox (Chandos) is, vocally, the most stunning. But Holten creates the best combination of all the components of the poem and the music, in the three dimensions that are the orchestra, the soloists, and the choirs. For this reason, Holten gets at the top of the discography of this magical piece.

By its diversity and the beauty of its vocal parts, this album is the best way to get to know Frederick Delius’s musical art.