A few weeks before playing the Tchaikovsky concerto with Vasily Petrenko in Salle Pleyel (watch the concert on Cite de la Musique Live), Julia Fischer stopped in Paris. ResMusica took the opportunity to discuss with her about her new album with David Zinman, but also other topics such as her first working experience with Salonen, whether Beethoven is still famous in Germany, her career as a pianist and… sexism in classical music. 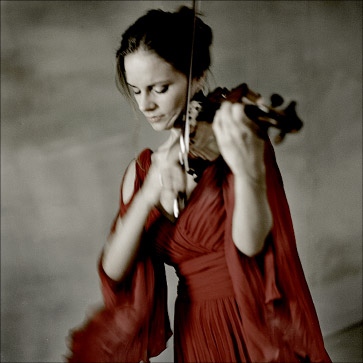 “Making music together is about trust: you open yourself in a way you would not do in a normal relationship”

ResMusica: You perform with David Zinman and Esa Pekka-Salonen, two  conductors who think hard about how to bring new generations to classical music. Do you share their interest?
Julia Fischer : I love to teach. With two kids at home it’s a responsibility. Every year, the week of New Year, I have a masterclass for children, Musikferien am Starnberger See. It was started by my mother, and now I teach there. We have lessons every day for children and young people, from 2 to 3 years old up to students. We mix people of all ages, the goal is to live in music, to show that music is part of life, even if you are not professionals. The thing is that we miss people who play music, but not for a career.

RM :  Even in Germany, you lack good amateurs ?
JF : Germany is in a better situation, but it the situation not as good as it used to be. There is less time in school for music, arts, sports, literature as people focus on things that can make money.

RM : Another initiative you take part in is the « Rhapsody in School”, what’ is the idea?
JF : You get in a classroom for just an hour, and my goal is simple. At the end of the course, I want the children to know who is Beethoven, Brahms, Bach.

RM : Children in Germany don’t know who is Beethoven?
JF : People in Germany have lost pride in their country, because of the history. They know of course about soccer and the German teams!

RM :  And what did you discuss with Salonen and Zinman ?
JF : I have been performing with David Zinman since 2003, so with him I had time to discuss music business. I met Salonen this year for the first time, and it was not easy to find time to discuss easily : in one week we had 3 concerts together. We were so busy, he started to talk only after a few days.

RM : How was the experience with Salonen?
JF : It was the first time I played his Violin Concerto. Playing a composer’s work is something very intimate. You start on an emotional ground. Making music together is about trust: you open yourself in a way you would not do in a normal relationship. I got the score about half a year ago, but we met only a few hours before the orchestral rehearsal. I had some ideas on how to conduct, I had some feelings about how to use the instrument, he was very open, modest. He respects people, this is something extraordinary.

RM : You recorded with David Zinman and the Tonhalle Orchestra the concertos by Dvořák and Bruch. How did you select these works?
JF : My mother is Czech, and I wanted to record the Dvořák concerto for a long time. I wanted to add the concerto by Martinů [Note : also a Czech composer], but the idea was not supported. The Bruch concerto has the same structure, a first movement with a cadenza, an important second movement.

RM : What was the reason for leaving Pentatone records to Decca, other than the prestige?
JF : Recording with an orchestra such as the Tonhalle requires a label that can afford it. The reason is that.

RM : You have founded the Julia Fischer Quartet. Don’t you find a contradiction between the equal role of musicians in chamber music and the fact you gave your own name to your quartet?
JF : The idea of the name did not come from me, but from the other musicians. They are very modest. It’s really stupid, I know, it’s commercial, but it is a way to attract people, so let’s be it.

RM :  It seems you only play with male musicians… [Surprised, she laughs]. Do you suffer from sexism?
JF : Yes, but I don’t take it seriously. And sexism goes both ways, it has advantages and disadvantages. For a musician, being a female plays also in your favour. Not always : people congratulate me for both taking care of my kids and have a career. My husband does the same, he takes care of the kids, but he does not get these remarks! I also experienced sexism in a bad way, even if the situation is better than what is said in the press. In my case, I felt I could find a solution.

RM :  In 2008, you played and recorded the Violin concerto n°3 by Saint-Säens and the Grieg Piano concerto, which was quite a performance. What happened since with your career as a pianist?
JF : It was a one time thing, this is just too much work!

A few weeks before playing the Tchaikovsky concerto with Vasily Petrenko in Salle Pleyel (watch the concert on Cite de la Musique Live), Julia Fischer stopped in Paris. ResMusica took the opportunity to discuss with her about her new album with David Zinman, but also other topics such as her first working experience with Salonen, whether Beethoven is still famous in Germany, her career as a pianist and… sexism in classical music.