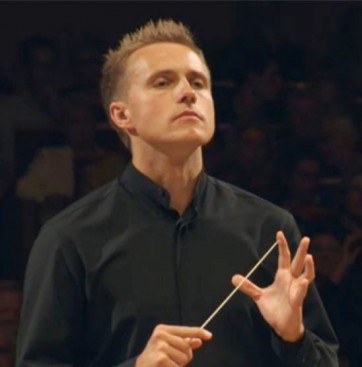 This concert, starring violinist Julia Fischer and conductor Vasily Petrenko tackling two masterpieces of Russian music (namely Tchaikovsky’s Violin Concerto and Shostakovich’s Symphony no. 4) looked very promising. And indeed, it was sold out for a few weeks before the performance. These high expectations were met, and both musicians gave the audience and an energized Orchestre Philharmonique de Radio France a concert that will be long remembered. For those who missed it, the entire evening was recorded and can be viewed online for free until 14 December 2013.

Julia Fischer’s reputation is already well established, and if she has anything to be careful of, it is how easy her talent seems. Her technique is so easy looking that her music flows naturally, but it could be perceived as lacking rougher edges, and thus Fischer needs to play with musicians that know how to challenge her and even to back her into a corner. David Zinman, who played with her in her album with Decca this spring, is a talented musician, but he and Fischer get on too well: sparks were missing. Petrenko like Zinman sets very high interpretative standards, but he does so in a way that gives the orchestra a surprisingly percussive precision that raises the stakes. The orchestra becomes Fischer’s setting, but in an immersive and demanding way. Far from jeopardizing her performance, this gives her the adrenaline she needs to reach her own peak. As a answer to the Petrenko–Tchaikovsky Russian duo, Fischer’s encore as German: the third movement of Hindemith’s Sonata in G minor, an impressive virtuosic piece. It was followed by a Bach Sarabande, which served as a soft landing.

The Symphony no. 4 is one of the few Shostakovich symphonies that Petrenko has not recorded (or at least released) yet in his cycle with the Liverpool Orchestra at Naxos. The recordings of the first and third symphonies were awarded a Clef d’Or ResMusica, and the second and fifteenth a Clef ResMusica. This symphony was composed in 1936, after Stalin had already violently criticized Shostakovich’s “bourgeois formalism.” It is among the composer’s best works. It is especially hard to perform because of its scale and its ceaseless rhythmic and emotional contrasts. Considering it to be too provocative and against the prevailing aesthetic of the era, Shostakovich did not have it played, and it was premiered only in 1961, after the legacy of Stalin’s influence had waned.

Petrenko was born in Saint Petersburg and is a Shostakovich specialist. For an hour, the orchestra played with breathtaking precision, fulfilling the demands of the work’s entire expressive spectrum, from its spectacular climaxes to the more introverted parts and the hints of waltz and military marches. Petrenko’s conducting is a surprising mix of imperiousness and swaying dancelike rhythm (the fugato being a very good example of this). It is at times supple and at times stinging, a combination of masculine and feminine elements, of shamanism from the depths of Asia and an acute rationality stemming from contemporary conducting practice. The video recording of the concert focuses too much on details of the musicians’ playing and gives only a partial account of the alchemy of the conductor’s body language.

This work is exhausting, as much for the musicians as for the audience. But its meditative, ambiguous conclusion can only achieve its full effect (at the same time tragic and accomplished) if we arrive at the end of the symphony with the feeling of having given it all, felt it all. Petrenko, pale, does not allow the applause to go on for too long. He could have received (and has received) longer ovations, but he must rarely have left the podium so utterly spent.

Petrenko, along with an intense orchestra, managed to render and unify in a logical way all the oppositions and contradictions of this lengthy work. To reach such an amazing understanding of this symphony is a challenge for any Russian conductor and orchestra. To do it at thirty-six with a non-Russian orchestra of which he is only a guest conductor is phenomenal.