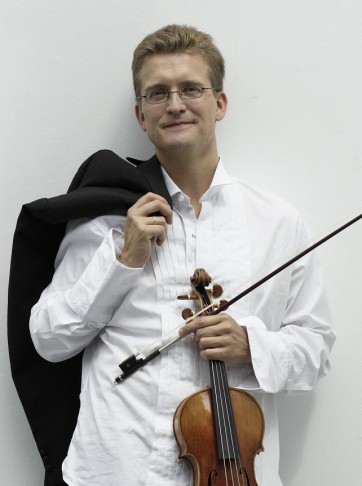 While the first violin concerto of Shostakovich is firmly established in the 20th-century violin repertoire, performances of his second violin concerto are considerably less frequent. Perhaps this is due to the latter work’s more introverted stance, its greater depth of emotion, and its bitter and sometimes vulgar sarcasm.

Christian Tetzlaff was the soloist in tonight’s performance, and, as expected, he displayed complete control over the solo part. One noticeable aspect of his interpretation was his sometimes exceedingly gorgeous and warm tone, particularly during the openings of the  first and second movements, where the orchestral fabric is quite austere and grey. While some interpret the solo part to match the surroundings, Tetzlaff’s playing brought an almost radiant glow into the darkness. The jarring transition from the peaceful conclusion of the second movement to the sarcastic high spirits of the third also could have used a little more bite, but otherwise in the third movement Tetzlaff brought an abrasiveness and caustic tone when required.

The Helsinki Philharmonic provided an excellent accompaniment. Worth mentioning are the flute-violin dialogues in the first movement and the dark lower strings in the second movement. Shostakovich included a very significant role for the horn section, who did themselves proud. Principal horn Mika Paajanen shone in his many solo parts.

The first piece on the program was Canto V by the grand old man of Finnish music, Rautavaara. The Cantos are a series of string orchestra works which have spanned the composer’s career, with the first one dating from 1960. The Canto V, the composer’s most recent, dates from 2011. With the exception of the opening flourish, which suggested the beginning of an epic journey, with struggles and conflicts to be overcome, the piece was entirely consistent with Rautavaara’s recent style: moderate tempo, warmly consonant lower-register harmonies, general absence of conflict, and long, meandering melodic lines sometimes harmonized by parallel clusters. While the piece had a shimmering surface beauty, there was also a lack of a clear direction or dramatic shape. After a brief, subdued climax, the work concluded with a beautiful, yearning cello solo, excellently played by Samuli Peltonen.

Finishing the program was a performance of Schubert’s Symphony No. 6, part of the Helsinki Philharmonic’s season-long survey of the complete Schubert symphonies. The work had a clear classical flavor, looking more towards Haydn than Beethoven. While the first and second movements were rather straightforward harmonically, in the final two movements, Schubert begins exploring rather surprising tonal transitions and centers. Throughout the work, Schubert provided absolutely delicious woodwind parts. A delight overall.