At the age of 22, Daniil Trifonov is creating a lot of interest on his name for the maturity and freshness of his style. ResMusica followed his career since the Chopin competition in 2010 in Warsaw and met with him in Paris before he performs with Valery Gergiev. We found a young man of great simplicity and sensitivity, anxious about finding the unique atmosphere in which composers were inspired to invent, and hardly conscious of the growing pressure resulting from the media attention on his person. 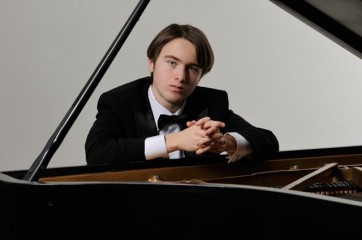 ResMusica: At only 22, you are celebrated by musical critics and influent artists such as Martha Argerich, recorded with Gergiev and the Mariinsky orchestra, signed with Decca and now Deutsche Gramophon, did you think this possible when you were 15? Do you keep your focus despite this new celebrity?
Daniil Trifonov: At 15, I was still in Moscow and I was only starting to play in concerts, little by little. I would not imagine that. I concentrate on performance, and concentration is especially important on video. When plenty of time is spent on non-spiritual work, it’s difficult to go to the depth of the work. On the day of the performance, I spend time alone.

RM: The time of competitions is now over for you. You study in Cleveland with Sergei Babayan. How long will you continue to study?
DT: I don’t plan to stop studying with teachers, Sviatoslav Richter never stopped studying. Sergei Babayan has incredible suggestions, he expect students to come with their own suggestions. He has 7 students between 19 and 30, and from time to time he makes a studio class.

RM: You were born the year of the collapse of the USSR. The focus on culture in the 1990’s was dramatically reduced, do you feel your generation or yourself was impacted by this situation?
DT: I am not sure. I started in my home city of Nizhny Novgorod, and when I came in Moscow at 8, there was significant progress in life quality. At the Gnessin Special School of Music there was an incredible enthusiasm from my teacher Tatiana Zelikman. She was not looking at her clock when we were preparing a program. Today, there is more attention to music from the government, not only in Moscow and Saint-Petersburg, but in other regions. An opera house was opened in Astrakhan last year, the hall of the Omsk Philharmonic Orchestra was renovated also…

RM: On your official website I did not find concert reviews from Russia, and you do not seem to play there often?
DT: Europe and the US have a long tradition of musical journalism. Russia is quite a fresh country, many things are new, concert halls are new and those who have succeeded have still to organise themselves.

RM: Musical reviews, including on ResMusica, insists on the freshness of your style, and how you communicate with the audience. Is this something you work on specifically?
DT: Something I learned in Cleveland is to explore possibilities. If you stick to only one way of playing, it’s going to narrow the colors. It’s important to look from different angles, widen the view, try to play in different atmospheres, five or ten, play the same piece in exaggerated manners, and then you play naturally.

RM: You also compose music, with a style which is close to post-romantic music, Scriabine or Prokofiev. Is this a way to say that music from that time still resonates with today’s young generations?
DT: Composing is a question of what is accumulated inside, and needs to go outside. I don’ compose on purpose, I may not compose for months, and then in a week a lot of material is written and I postpone a lot of other things. I started to compose at 5. In composition, there is a unique atmosphere of the person who composes, it can be unrepeatable, and understanding later this atmosphere helps playing it.

RM:  So, your performance seeks to find the original state of mind of the composer?
DT: Music comes as a result of the impulse of certain emotional or spiritual state, which is not ordinary. It creates this impulse and detecting this state of mind of the composer is the task of the performer. Other forms of art are of great help in broadening this range of perception: arts, literature… The sculptures of Rodin in the Orsay museum made one of the strongest impressions on me: how immediately you could see the really unique way of expression but with an invention which is never for the sake of invention, the Hand of Devil for instance.

RM: The audience of classical music is ageing, and this age issue will get critical in the next 10 years, in particular for instrumental music. How do you see yourself, you and your generation, playing a role to attract younger people to the concert halls?
DT: [After a silence] As musicians we are in charge of making sure every performance is done with 100% devotion to the music, and doing our best so other people love the music as much as we do.

At the age of 22, Daniil Trifonov is creating a lot of interest on his name for the maturity and freshness of his style. ResMusica followed his career since the Chopin competition in 2010 in Warsaw and met with him in Paris before he performs with Valery Gergiev. We found a young man of great simplicity and sensitivity, anxious about finding the unique atmosphere in which composers were inspired to invent, and hardly conscious of the growing pressure resulting from the media attention on his person.