When accused of composing out of self-pity, the Swedish composer Allan Pettersson (1911-80) angrily responded by saying that his music conveyed not self-pity but “pure information.” 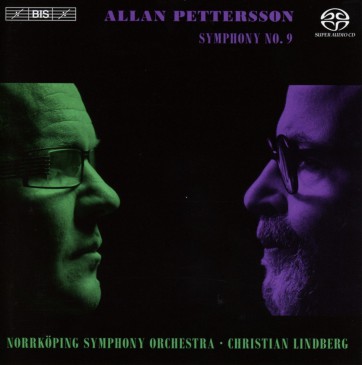 The circumstances of Pettersson’s life has allowed, perhaps too readily, interpretations of his music informed by the composer’s difficult childhood and constant battle against illness as an adult. Christian Lindberg has taken a different approach to Pettersson, conveying the music’s “pure information.” On the present recording the Norrköping Symphony Orchestra continue their Pettersson symphony cycle on BIS initiated with Symphonies No.1 & 2 (Clef d’Or ResMusica 2011) and Symphony No.6 (Clef ResMusica) with the composer’s massive, single-movement Symphony No.9.

Most of Pettersson’s symphonies are single-movement works lasting around 45 minutes, placing extreme demands on both performers and audiences. In the Symphony No. 9, Pettersson takes this even further, indicating in the score a performance time of 65-70 minutes. This music was considered so difficult that the premiere recording by Sergio Comissiona and the Göteborg SO (by all means a competent combination) lasted nearly 90 minutes, and it was not until Alun Francis on CPO in the early 1990s that anyone dared to record this music at the tempos indicated.

Despite this somewhat intimidating introduction, Pettersson’s music is deeply rewarding to those who are willing to put in the effort. Engaged and active listening will reveal deep layers of logic and complexity, as well as a raw, painfully honest expression of the human condition. The Symphony No. 9 is no different.

While Francis’ rendition was a monumental achievement, this newcomer could be described as a revelation. Lindberg, like Francis before him, follows Pettersson’s tempo indications and conducts a performance lasting about 70 minutes. Consistent with Lindberg’s previous installments in this series, the details which Lindberg draws out of this complex score have to be heard to be believed. For example, listen to the opening pages, where every contrapuntal thread and exchange between instrumental groups is distinctly rendered. Listen to how each pitch is clearly defined in the upward scalar gesture (Track 2, 5:05), foreshadowing the composer’s Symphony No. 10, or the tight ensemble between brass and percussion, with violins and flutes screaming and soaring above (Track 8, 2:37).

It is precisely due to this extreme attention to detail that this massive work becomes a logical flow and evolution of ideas, as opposed to protracted note-spinning. Under Lindberg’s guidance, the music always has a sense of direction, despite the highly varied landscapes and musical styles that Pettersson takes us to.

While some listeners may prefer Francis’ greater sense of conflict and desperation, as well as fuller string sound and more distant soundstage (the present recording seems to have used close microphone placement), Lindberg’s major achievement is to let the music speak for itself. The tension, strife, and conflict for which Pettersson is well known comes out of the music organically if one follows the score as written and brings out the numerous details. This is what we have here.

Also included in the package is a bonus DVD featuring Vox Humana, a documentary on the composer produced in the mid-1970s. While the documentary seems to be guided towards those who already have some familiarity with the composer, it is nevertheless an insightful portrait into both Pettersson the man and the composer.

The Symphony No. 9 is probably not the best place to start for newcomers to Pettersson’s music (Symphony No. 7, Symphonic Movement or Concerto for String Orchestra No. 1 are better introductions). Despite the challenging nature of this music, the present recording provides another convincing argument that Pettersson was not a sick and disabled man who happened to compose, but a master composer who deserves the same recognition as Sibelius and Nielsen. The Norrköping SO do themselves proud in this formidably difficult music. Enlightening and recommended without hesitation.