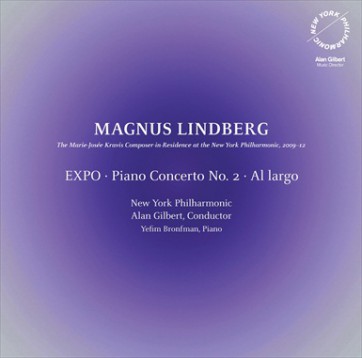 Magnus Lindberg raised some eyebrows when he was appointed composer-in-residence with the New York Philharmonic for the seasons 2009-11 (extended to 2012). This move was interpreted by many that the New York Philharmonic under Alan Gilbert would now take new music seriously, which was arguably neglected under the relatively conservative tenures of Kurt Masur and Lorin Maazel.  The three works featured on this disc are a document of the Lindberg-NY Philharmonic partnership.

The first work on the disc, EXPO, was the opening work on Gilbert’s first concert as music director of the NY Philharmonic. Following the crack of a whip, rushing and swirling strings (perhaps reminiscent of Salonen’s Insomnia) lead to a mildly dissonant brass chorale, suggesting broad horizons. Immediately, Lindberg has established the basic premise of the work, the opposition between fast and slow music. These two types of music then interact throughout the work, but real conflict is avoided between them. A beautiful sighing motive also appears throughout. Following a final dash to the finish (resembling the opening to the last movement of Bartok’s Concerto for Orchestra), the work concludes with luminous orchestral chords, with rising fifths suggesting the conclusion to Mahler’s Symphony No. 10.

The program notes describe the Piano Concerto No. 2 as « crypto-Ravelian », with the present work referring to Ravel’s Concerto for the Left Hand. Occasionally the work’s affinity to Ravel is quite striking. While Lindberg does not feature a contrabassoon solo, the searching piano line which opens the work, written in the instrument’s bottom register, hints at the groveling double basses which open the Ravel. The upward surging open fourths and fifths, featured in the final movement cadenza, are also reminiscent of the French master (influences from Gershwin can be heard as well).

Although the percussive piano writing and massive, block-like sections are reminiscent of a more uncompromising Lindberg, the concerto’s crystalline qualities, regularly revisited landmarks, and sometimes epic feel (the opening to the second movement is particularly vast and open) allow even casual listeners to follow the musical narrative. It goes without saying that Lindberg composed a formidably difficult solo part, which Bronfman dispatches with not only power but eloquence.

According to Lindberg, the title Al largo refers to being offshore, on the open sea, where no land is visible. This is an apt description, as the work exudes a sense of freedom and sunny, open spaces. Similar to EXPO, there is a sense of rapid, swirling activity behind the broad and expansive gestures. One of the most surprising moments of the work occurs at the halfway point, where Lindberg quotes quite literally the opening of Ravel’s Mother Goose, interspersed with piano flourishes.

While the Piano Concerto No. 2 may at times be challenging for some listeners, the works on this disc are for the most part highly accessible and audience-friendly. Perhaps this is a natural progression of Lindberg’s artistic development, as his works from the 2000s have generally become clearer in texture and harmony. Or perhaps Lindberg was gently instructed to be aware of the average NY Philharmonic subscriber and to avoid scaring them off.

Throughout this program the NY Philharmonic clearly demonstrate their world-class status, with virtuosic and muscular brass (in particular EXPO and Al largo) and excellent first desk strings. The live recording sonics are clear, if somewhat dry. If you are looking for Lindberg at his most life-affirming and joyous, here it is.