Rising from the abyss: Leif Segerstam with the Turku Philharmonic 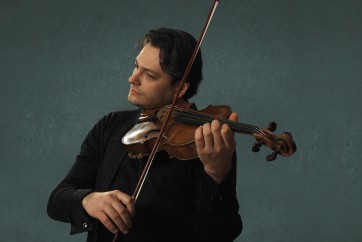 Three cities often come to mind when discussing the Finnish orchestral scene: Helsinki, Lahti, and Tampere. Turku is usually left out of the discussion, but the recent appointment of Leif Segerstam as chief conductor, as well as some ambitious recent programming, may change this situation. This evening’s concert would certainly fall into the ambitious category.

The Viola Concerto was one of the last works that Schnittke completed before suffering his first of a series of strokes, and one could argue that Schnittke even predicted his fate in this dark work. The three-movement piece opens with a series of tentative leaps (which immediately fall back down) in the solo viola, accompanied by barely audible strings, gradually thickening into a dense cluster. After a terrifying climax, the music retreats to a slightly cheeky cadence, perhaps looking back to Viennese classicism. The movement ends in a fog of uncertainty, with the solo viola recapitulating the opening motive.

In the second movement Schnittke puts on a less serious face, at least part of the time. This movement alternates between rapid sections featuring endless streams of arpeggiated sixteenths from the soloist, interspersed with slower episodes, suggesting different musical styles or eras. Particularly noteworthy is the section featuring cloyingly sweet music for solo piano and viola. One possible description could be the ghost of Mahler at the piano, accompanying dancing skeletons in an abandoned Viennese café; the scene is both ridiculous and chilling.

The lengthy final movement is altogether serious. Schnittke introduces a clear major-minor conflict, as well as a sense of leave-taking and sadness. After a disorienting solo passage featuring quarter tones, Schnittke gives us the final climax of the work, a terrifying view into the abyss. The work ends in darkness, with the solo viola holding a C natural/C sharp over a protracted A pedal, leaving the major-minor conflict unresolved.

The guide through this journey was the extremely talented Maxim Rysanov, who could very well have set the new standard for how this work should be interpreted. In addition to dispatching the work’s many technical challenges, every sound he produced had both color and personality. For example, the slithery leaps of parallel sevenths in the second movement were played with not only tonal accuracy but with a vulgarity that is missing in other interpretations. His sound was intense and focused, and had little trouble penetrating Schnittke’s sometimes dense orchestral textures.

Having recorded several Schnittke discs for BIS, this music is familiar territory for Segerstam. The orchestral parts are not mere accompaniment but play  integral roles in this work, and Segerstam’s interpretation reflected this. The dry, sharp attacks from woodwinds and brass in the second movement were the ideal foil to the soloist’s vulgar utterances, while the tolling bells in the work’s final climax were truly frightening.

Although performing Mahler’s Symphony No. 9 after the Schnittke makes for a long evening, the ultimate sense of peace and transcendence achieved in the symphony is a  suitable contrast to the darkness of the concerto.

Segerstam’s interpretation began promisingly: a precise « heartbeat » rhythm from cellos and horns, clear harp articulation, and well-defined violas. However, one of the major challenges of the first movement is maintaining a clear dramatic narrative over a protracted span of time. Segerstam was not entirely successful in this regard, although this might have been due in part to the curious acoustic of the Turku concert hall, which seems to favor woodwinds and low brass. As a result, the first movement came across as excessively focused on the contributions from these instruments as opposed to the overall sound picture.

The heavily articulated entrance of the violins in the second movement brought out the clumsiness requested by Mahler, although some might argue that Segerstam’s approach was excessive. Excellent horn playing and a clear differentiation of the three different tempos were highlights. The busy counterpoint of the third movement was well defined, and the dreamy interlude foreshadowing the final movement was tenderly done. The warm and rich tone of the Turku strings shone in the final movement. A sense of hard-fought beauty and striving was palpably present, although the minor key interludes could have been played more softly.

Putting Schnittke’s Viola Concerto and Mahler’s Symphony No. 9 on a single program is certainly ambitious, requiring great physical and emotional stamina from the musicians. It was clear from this concert that Segerstam had a distinct vision with this music, and the responsive and determined playing he got from the orchestra is a testament to the symbiosis that they have already developed.