The Beethoven Festival 2014 in Warsaw

For the past 18 years, Warsaw’s Beethoven Festival has signaled the beginning of the festival season. 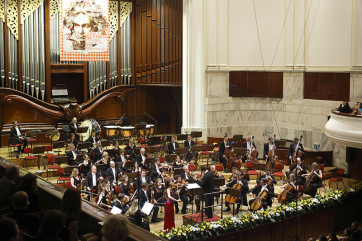 Founder Elżbieta Penderecka chose Beethoven and the ideal of freedom as a theme for this new edition, using the anniversary of the Fidelio’s composition as a backdrop. For almost two weeks, there were daily concerts at the Warsaw Philharmonic Orchestra and at the royal castle, with operas, symphonic concerts and chamber music recitals. The 2014 edition also hosted the yearly gala of the International Classical Music Awards.

As for the guest orchestras, the festival made a real spread by having the London Royal Philharmonic Orchestra and the Rotterdam Philharmonic. Swiss conductor Charles Dutoit received a prize for his entire career, and he led his London musicians for a prestige concert. After opening with an elegant rendition of Beethoven’s Creatures of Prometheus, the conductor accompanied Arabella Steinbach for Sergei Prokofiev’s Concerto No. 2. The violinist offered a classic reading of that piece, maybe a bit too classic, especially in the first two movements. The last movement, full of panache, was the most convincing of the three. In the second set, Charles Dutoit offered the audience an ostentatious piece: Camille Saint-Saëns’s Symphony No. 3 (he had recorded one of the definitive versions of it for Decca with the Montréal Orchestra). Within the Philharmonic Orchestra’s generous acoustics, the London Royal Philharmonic sounded radiant. The last movement carried everyone away, and the audience gave the musicians an ovation which was rewarded with two encores: Sibelius’s Valse triste and “Nimrod” from Elgar’s Enigma Variations.

The Rotterdam Philharmonic Orchestra with its conductor Yannick Nézet-Séguin was in the middle of a vast European tour, and it was the first time playing in Warsaw for both the orchestra and the conductor. In their first set, the orchestra accompanied Lisa Batiashvili in Beethoven’s Concerto for Violin. In a nice touch, the violinist tried to break the routine by playing Alfred Schnittke’s rare and expressive cadence, and by raising the smallest details in the writing. The sound quality was as always exceptional, however these intellectual endeavors damaged the natural beauty of the Concerto. The solist, very moved by what was her first concert in Poland, made a brief speech to share her feelings and her familial ties with that country. She offered an original encore: an orchestrated Georgian folk song. Yannick Nézet-Seguin then took on Tchaikovsky’s Symphony No. 6 (he had recorded a beautiful reading of it for DGG). His very energetic direction had to make the best of the acoustics of the room: the way it enhanced the dynamics muddled the conductor’s concept. It is well known that tours are difficult exercises for orchestras, confronted to a variety of rooms they do not know. Yet the conductor’s enthusiasm was well received by the audience. Yannick Nézet-Seguin then launched into the prelude of Moussorgski’s Khovantchina. The flute solo by Juliette Hurel, the first flute of the orchestra, was especially brilliant. 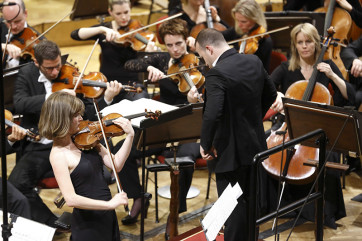 All the editions of the festival featured operas in concert versions, one of which is produced in collaboration with the Singing Department of the University of Yale. The choice for the 2014 edition fell on Gluck’s Iphigénie en Tauride. Young Polish conductor Łukasz Borowicz, who is also the musical director of the National Radio Orchestra, was given the lead. He may be almost unknown in French-speaking countries, but he has behind him an impressive discography, including Andrzej Panufnik’s Symphonies for the German label CPO. He tackled head on the score, forcing an energetic style which showcased the revolutionary element in the composer’s writing. The singers were excellent in their involvement and their respect for the style: David Pershall (Oreste), Eric Barry (Pylade), George Mosley (Thoas), Anna Destraël (Diane), and most of all the exceptional Helena Jutunen (Iphigénie). The associates were well played by Laura Holm, Benoît Deney and Guillaume Durand. The Polish Radio choir, prepared by Izabela Polakowska, displayed an ideal homogeneity and projection. Everybody involved took great cares with the diction and the pronunciation, which should be saluted, even if the very generous acoustics of the National Philharmonic did not help them.

For the past 18 years, Warsaw’s Beethoven Festival has signaled the beginning of the festival season.