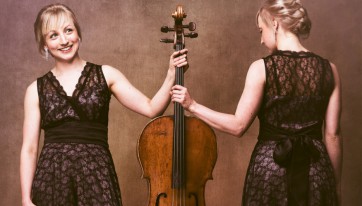 2014 marks the 80th birthday year of the great Russian composer Alfred Schnittke. Although Schnittke’s first cello sonata and first cello concerto are starting to enter the repertoire, most of Schnittke’s output featuring the cello is infrequently performed. The young cellist Pinja Laine has commemorated this major Schnittke year by performing his rarely-heard Sonata No. 2 for Cello and Piano, along with his more popular Suite in the Old Style. Works by Rossini and the Finnish composer Max Savikangas completed the program.

Savikangas’ Kaliki is a short work originally conceived for solo cello. In this evening’s performance, the solo cello was accompanied by videos created by the artist Teemu Mäki. The piece itself was performed three times, each accompanied by a different video: modern dance, abstract computer animation, and a strip-tease dance (that’s right).

The piece is a fascinating combination of different sounds and effects, exploiting a large range of the cello’s expressive abilities. While the music lacks immediately recognizable motives or themes, its stream-of-consciousness nature was nevertheless compelling.

When combining instrumental music with a visual art, some would say that it is important that one enhances the other, that the two put together are more than the sum of their parts. I am not sure that this performance was completely successful in this regard. Savikangas’ composition was sufficient in itself, not least because of the fact that it served as a vehicle for Laine’s expressive and confident playing. In my opinion, the videos seemed to be a distraction from the music (in particular the strip-tease) and one might be left wondering what new insights the videos provided for the music, and vice-versa.

Nevertheless, it is important that living composers continue to collaborate with artists from different disciplines, and that performers are willing to broaden the range of experiences available in a recital format.

Composed in 1994, the Sonata No. 2 for Cello and Piano is a product of the composer’s final years. Schnittke’s music from this period is often austere, bleak, and perhaps even despairing. In this work, the composer’s trademark extroverted polystylism is mostly absent, if not gone entirely.

The first movement is essentially an extended monologue for the cello, with the exception of minor contributions from the piano. The music begins in the lowest depths, and becomes increasingly lamenting and anguished. The musical material consists largely of a simple chromatic scale, drawn out and spread over multiple octaves. The second movement finds the cello in a quiet, desperate rage, accompanied by cold and brutal piano clusters. The third movement is a sad, lyrical meditation, while the fourth movement is a final outburst. The fifth and final movement ends the work in an enigmatic, unresolved dissolution.

A much different Schnittke can be found in the Suite in the Old Style. One can think of this work as Schnittke at a costume ball; the theme of the evening is the Italian baroque or renaissance eras. For the most part, Schnittke is enjoying himself in disguise, but every now and then, he will reveal himself from under his mask: a strange dissonance, inquisitive trills, an occasional ugly sound from the cello. A thoroughly enjoyable work, and a major contrast from the deadly seriousness of the Sonata.

The evening closed with Laine’s arrangement of Rossini’s Introduction, Theme and Variations. The work could almost be thought of as a light-hearted mini-opera, with the cellist serving as the protagonist.

The cellist Pinja Laine was the star of this evening. While her confidence and technical ability is a given, her ability to move effortlessly between different playing and expressive styles was impressive. Also worth mentioning is her mastery of the cello’s different colors and nuances: the hushed opening of the Schnittke Sonata was barely audible, with just the slightest inflections of color mediated by the left hand, or the airy and effortless sound (with just the right amount of vibrato) which she conjured for the Suite.