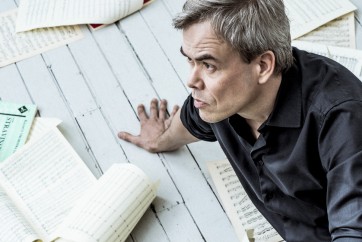 Hannu Lintu has enjoyed a long relationship with the Finnish RSO and this collaboration became a commitment during the 2013-2014 season, when Lintu became Chief Conductor of this ensemble. In this program, Lintu began his second full season in this capacity with a varied program of early 20th and 21st-century works.

The program began with Sibelius’ Symphony No. 5, a work familiar to Helsinki audiences. The opening chorale under Lintu’s direction had a sense of restrained nobility, in contrast to the more epic stance sometimes heard in other interpretations. The first movement featured wonderfully rich and fluid lower strings, while the multiple climaxes came across as massive, while still maintaining a sense of transparency. Careful attention was paid to phrasing and sculpting the broad pizzicato lines in the second movement. The opening of the final movement featured some very exciting string playing, although this came at the expense of some of the middle voices. The arrival of the grand tune was beautifully executed. Lintu managed to find extra resonance in the enigmatic final chords.

Following the intermission came the world premiere performance of Matthew Whittall’s The Architecture of Happiness. Born in Canada but now established in Finland, Whittall’s music is regularly performed by both Helsinki orchestras. The work opened with a quiet, expectant string chord, slowly morphing into other harmonies. The sense of spaciousness and use of white-key dissonances was perhaps reminiscent of Peteris Vasks, but without the Latvian’s deep sense of grief. The entrance of a black-key pitch signaled a change of direction, leading into a dialogue between woodwinds and pitched percussion.

While the Architecture of Happiness came across as an accessible piece, sometimes featuring an almost cinematic sweep, Whittall did offer many surprises. For example, the  ghostly but somewhat jazzy trombone solo (here brilliantly played by Darren Acosta), the rudely bleating trumpets, the quasi big-band brass writing, or the ticking-clock woodwinds startlingly interrupted by the crack of a whip. The work’s sense of nostalgia, particularly in the central string-led section, was quite moving.

The final scene from Strauss’ Salome is often performed as a stand-alone piece in the concert hall, as it is a virtuosic vehicle for both the soprano soloist and the orchestra. By most accounts the stage action is disturbing: Salome has requested the beheading of John the Baptist, and after receiving the severed head, professes her love to it and ultimately kisses it.

Against this dramatic backdrop the music features Strauss’ typical rich orchestration and lush melodies, while also conveying something much more sinister. Soprano soloist Nina Stemme possessed the necessary power and range for this formidably difficult music, while also communicating a sense of dramatic intensity.