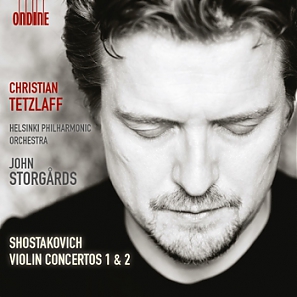 The Finnish record label Ondine seems to be quite interested in Shostakovich right now. Since late 2013, Ondine has released four Shostakovich discs: two featuring vocal-orchestral works, and two featuring the string concertos, including the present release. While the former two discs feature relatively unknown works, the violin and cello concertos are firmly established in the repertoire and have been extensively recorded before. Given the multitude of available options, one might ask if we really need another recording of the violin concertos.

While I have expressed reservations about the need for more recordings of this repertoire, I can say without hesitation that the performances here are excellent. Tetzlaff plays with such a beautiful, rich tone, providing a glowing warmth to the otherwise nocturnal and restrained opening movements of both concertos. While his pianissimos are impossibly delicate and fragile, he can also unleash a gritty, vulgar sound when necessary, as in the second and final movements of the first and second concertos, respectively.

Stogårds and the Helsinki PO deserve accolades for elevating the orchestral parts in both concertos from mere accompaniment to equal partners with the soloist. For example, in the first concerto, listen to the wonderfully unified tone of the cellos and basses as they open the work, or the tight interplay between pizzicato strings and woodwinds with the solo violin in the second movement.

If there are any criticisms with Tetzlaff’s performance, they are matters of personal taste. Other soloists may add more emphasis to the music’s vulgar aspects, or play with a more restrained and distant tone in the music’s nocturnal or introverted sections. Regardless, what Tetzlaff brings to this performance is an entirely valid interpretation and is worth hearing.

Overall, the sonics are excellent. Although microphone placement might be a little too close for some, the amount of orchestrational detail which has been captured is quite amazing. While it can be debated whether or not another recording of these works is necessary, I am happy to have this disc in my collection and will return to it regularly.