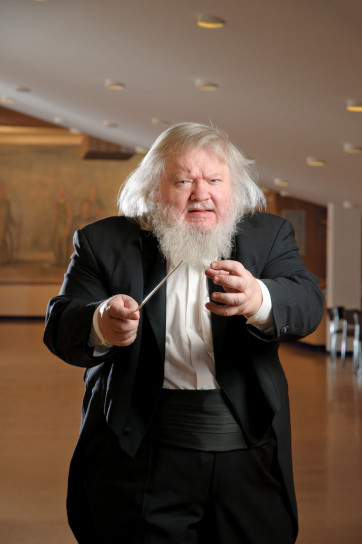 Although Richard Strauss’ reputation is firmly established in both the concert hall and the opera house, only a handful of the large number of works he wrote for orchestra are regularly performed. While it is debatable that Strauss’ lesser-performed orchestral works are inferior to his more popular ones, it is nevertheless worthwhile for his neglected works to be performed at least occasionally. Such was the case with this evening’s performance of Strauss’ Olympic Hymn.

Strauss was commissioned to compose a celebratory piece for chorus and orchestra to open the 1936 Berlin Olympics. The Olympic Hymn was the result of this commission. The work begins with an offstage trumpet fanfare, leading to a brief orchestral tutti. The full chorus then makes its unmistakably jubilant entrance.

While the musical material and orchestration of this short work is rather bland, Strauss does offer a few surprises. There were noticeable stretches of minor-key explorations, and any sense of bombast (which actually would have been appropriate for the occasion) was quite restrained. Overall, this performance was certainly a valuable opportunity to hear a Strauss rarity, but this composer’s better-known works are clearly of higher quality.

Regarding the Piano Quintet of César Franck, the pianist-conductor Ira Levin wrote that « the full impact of this work could be even more powerfully projected with an orchestral treatment. » In creating his orchestration of this work, Levin also stated that he strove for a « complete rethinking of the entire score in orchestral terms. » Ironically, while Levin’s orchestral rendition was successful in this regard, some of the impact of the original chamber version was lost here.

In orchestral guise the opening of this work was definitely powerful in the visceral sense, but lacking the passion and (not surprisingly) intimacy of the chamber version. The somber and eloquent response of the piano, here assigned to the woodwinds, was tastefully done and quite beautiful, but nevertheless seemed somewhat detached. In general, the full orchestra robbed the work of its intimacy but allowed Franck’s dramatic arches to breathe and flow.

Levin’s orchestration nevertheless provided the opportunity to see this work as an independent entity, separate from its source. For the most part, Levin used sounds familiar to the mid-19th century orchestra. However, his use of low woodwinds added an additional depth of sound, while his occasionally creative orchestrational touches (piccolo accompanied by low brass, for example) were memorable.

Following the intermission came the world premiere of Segerstam’s Symphony No. 269. Since 1993, all of Segerstam’s symphonies have been written for an ensemble without conductor, and this piece was no different. Due to Segerstam’s « freely-pulsative » approach, interpretations of his symphonies can vary significantly from one performance to the next.

It is difficult to find adjectives suitable to describe this music. As expected, Segerstam is an expert orchestrator and is capable of creating any sound he wants from the orchestra. The harmonic and musical language was rather austere, but this was offset by Segerstam’s colorful orchestration. In particular, his use of pitched and metallic percussion was very effective, and at times was reminiscent of Rautavaara’s Angels and Visitations, a work that Segerstam is familiar with. The addition of a large wooden hammer to the percussion section was unmistakable, but Segerstam did not use this inherently violent instrument to the same dramatic effect as Mahler. On the surface, this work appeared to be deeply serious, but Segerstam’s use of a slide whistle and musical saw throughout suggested humor, if not other-worldliness. Perhaps this work could not quite sustain its 21-minute length, but it was nevertheless engaging.

The concert closed with one of Strauss’ most popular works, Vier letzte Lieder. Soprano Helena Juntunen infused an appropriate warmth to this performance; there was great depth in her low and middle registers and a richness to her upper range. Segerstam’s broad approach to the fourth movement was particularly beautiful. In a work which must sound as smooth and polished as possible, there were some minor intonation and ensemble issues which detracted somewhat from the performance. Regardless, there were many memorable moments, such as the heartbreakingly beautiful solo contributions from principal horn Ville Hiilivirta and concertmaster Pekka Kauppinen.