The Leonard Bernstein Letters, a jubilant and luxuriant book 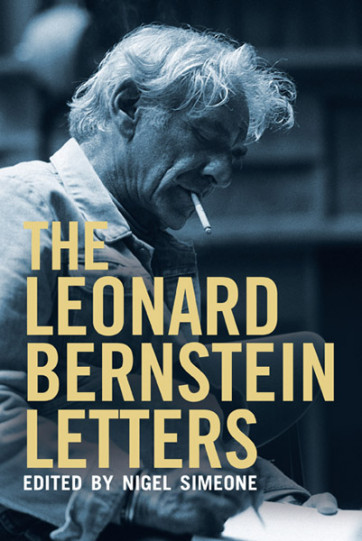 A work that is at once appealing, captivating, even fascinating andengaging, superabundant, made up of 650 letters, memos and notes, selected, prioritized, with detailed care and foresight, with thoughtful rigor and relevance by Nigel Simeone, drawn from Leonard Bernstein’s enormous body of correspondance (with a second volume to follow!)

650 letters then, from an often excessive busybody (in 1941, he naively inquires about the age of Pierre Monteux, then conductor of the San Francisco Symphony!), a larger-than-life character, always engaged, always involved at every moment in 1000 projects and enterprises through which he constructs a persona, builds himself a destiny, and by means of which the reader shapes, much as would a sculptor, an authentic personal Bernstein, warm, human, with whom he will share with delight discoveries, ambitions, panics, and reversals of fortune. A true artist emerges, more interested in writing than in conducting an orchestra (Fritz Reiner forcefully advises him to give up the career of a leader; as for Roy Harris, he’ll counsel him to change his name), a wildly devoted defender of contemporary American music, of Aaron Copland, Samuel Barber, David Diamond, Gerald Levinson, Henry Cowell, Ned Rorem, Virgil Thomson etc… etc… In addition, he will become the first real “American” conductor of the New York Philhamonic (for example, the program for the December 5, 1985 concert boasted three American symphonies: the 3rd of Roy Harris; William Schuman’s 3rd, and Aaron Copland’s 3rd.)

Everything deserves to be cited; every letter should be studied, analyzed, scrutinized. Let’s simply say that these in particular clamor for our attention: Number 520, adorable, delightful, from a sincere and spontaneous Yo Yo Ma, “I’m ten years old. I study with Mr. Leonard Rose. I’d like to play for you.” The numerous candid missives of Aaron Copland and Dimitri Mitropoulos, both violently in love with the young Bernstein. Jacqueline Kennedy’s incredibly touching note (537), written the day after Robert F. Kennedy’s assassination.  The tormented but realistic messages of Felicia Montealegre, whom Bernstein met at Claudio Arrau’s home and married on September 9, 1951, after many fiascos. The letters dedicated…I’m weighing my words…to the development of West Side Story.  Bernstein wanted nothing to do with it (282). It took all the ingenuity, all the virtuosity, but also all the cruelty and “viciousness” of a Jerome Robbins (362) to convince Bernstein to stick with the production. The frank, cordial, explicit letters of Marketa Morris, the “Frau,” with whom he would be in analysis nearly all his life, only to replace her with Renée Neil, with whom he ends up fighting, replacing her with Willard Gaylin (Bernstein will never accept his bisexuality, well-established though it was.)

And then there’s that long, laborious “sworn affidavit,” tragic, overwhelming, written on August 3, 1953, in the throes of full McCarthyist hysteria, in which Bernstein, who needs to renew his passport to go to Europe to conduct, gives himself up to the most brazen, shameless, most stalinist of self-criticism.  He “explains” his activities in support of the Black Panthers, the National Negro Congress, the Civil Rights Congress, the Joint Anti-Fascist Refugee Committee (what Tom Wolfe calls “radical chic”), his friendship with such notable communists as Arthur Miller, Lillian Hellman, John Garfield, Judy Halliday, Aaron Copland, Marc Blitzstein, Lena Horne etc… etc…  Sad times! (323)

And then finally, there are those reflections, those discssions, the endless shilly-shallying about Tanglewood and Koussevitzky, about the saga of his Jeremiah Symphony and his “Chichester Psalms,” about his “Young People’s Concerts,” and Fischer-Dieskau (546) whom he required (politely) to take on the role of Kurwenal in a forthcoming TRISTAN, about his tours in Israel, Japan, Europe, etc…etc…

One could, of course, quibble over the choice of letters included here. Nigel Simeone clearly explains his decisions…and is convincing. The book is divided into “chapters” (Early Years, First Successes, Europe and Israel, Marriage, Passport Problems, West Side Story, The New York Philharmonic Years, Triumphs, Controversies, Catastrophes, Final Years), each one preceded by notes and commentary, clear and precise—sometimes overabundant.

But let’s not complain about an embarrassment of riches!

In sum, this is a jubilant and luxuriant book, informative to an extreme, essential reading for anyone who wants to fully define Bernstein and his time. Available only in English for the moment.