Pekka Kuusisto’s guide to the Finnish violin, and more 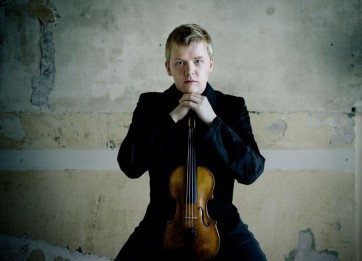 Finnish violin music is undoubtedly dominated by the masterful Violin Concerto of Sibelius, one of the most performed and recorded concertos for the instrument.

However, the violin also plays a very important role in traditional Finnish folk music, in particular the music played by fiddlers known as Pelimanni. In this evening’s program, Pekka Kuusisto continued his close artistic collaboration with the Tapiola Sinfonietta, exploring the Finnish violin from these two perspectives.

The program opened with a series of traditional wedding marches, dances, and polkas from the Kaustinen region in Western Finland. Performed by three violins and harmonium, one of the most distinctive qualities of this music was its very strong sense of pulse–provided not only by the steady beat of the harmonium but also by the particular bowing style of the violinists. The melodies were played exclusively by the violins and largely in unison; the harmonium provided rhythmic and harmonic support. One was struck by the joy and vitality which was conveyed not only by the musicians but also by the music itself.

Nordgren’s Portraits of Country Fiddlers transported the musical spirit of this traditional music and refracted it through the lens of the late-20th century. Scored for string orchestra, Nordgren greatly expanded the fiddler’s sound-world with cluster harmonies, ponticello tremolos, Bartok pizzicati, and explorations of distant keys.

Following the intermission came an unaccompanied performance by rune singer Ilona Korhonen. The music consisted of a repetitive melody which gradually increased in intensity to a searing lament. While coming across as deeply confessional, Korhonen’s performance was notable for its restraint in terms of external drama. Also worth mentioning were Korhonen’s extremely clear diction and pure tone.

Performing Sibelius’ large orchestral works with chamber-sized forces is not a new concept, as Paavo Berglund has previously recorded a Sibelius symphony cycle with the Chamber Orchestra of Europe. Despite this precedent, Sibelius’ Violin Concerto is a work usually performed with full orchestral forces, led by a conductor.

Violinist Pekka Kuusisto is well-known to Helsinki audiences for his adventurous approach to both repertoire and performing; recent years has seen performances of the concertos by Ligeti, Salonen, and Fagerlund. It is therefore not surprising that Kuusisto would approach the Sibelius Violin Concerto, one of the world’s most performed violin concertos, in an unconventional way: with a chamber orchestra and without conductor.

Not surprisingly, the use of reduced forces gave the mystical opening a new sense of clarity. Articulations and rhythms in general were precise and well-defined. What was particularly interesting about this performance, however, was the non-interventionist approach that Kuusisto took as soloist. This work is one of the most virtuosic concertos in the standard repertoire; Sibelius clearly puts the soloist in the spotlight. In this evening’s performance, it seemed like Kuusisto was treating this work as a symphony with an obbligato solo violin; he wanted to avoid interfering with the orchestra. As much of the dramatic shape of this work is guided by the soloist, I was left wondering if this approach perhaps robbed the music of its impact.

Nevertheless, new perspectives on old favorites are always welcome, and Kuusisto should be commended for giving audiences a fresh reinterpretation of something so familiar.