Isin Metin To Conduct 2015 Gala Concert With The Bilkent Symphony 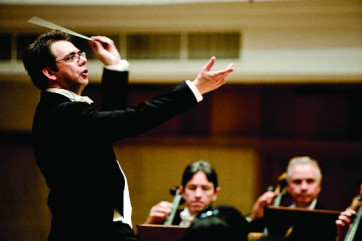 The ICMA Gala Concert on March 28 in the magnificent Bilkent Hall in Ankara, Turkey, will be conducted by Isin Metin. He is conducting all the pieces with soloists. Three guest conductors, Dmitrij Kitajenko, Adam Fischer and Alexander Liebreich will also be part of the program.The Bilkent Symphony Orchestra was founded in 1993 as a unique artistic project of Bilkent University. Developed and managed by the Faculty of Music and Performing Arts, the orchestra is composed of musicians from Turkey and 12 other countries. With these characteristics the Bilkent Symphony Orchestra is the first « private, international and academic » artistic ensemble of Turkey.The orchestra aims to bring a wide range of activities to large audiences and to spread the appreciation of music through events such as the ‘Bilkent Concert Series’, ‘Turkish Composers Week’ and ‘Education Concerts’ held in its own venues, the Ankara, Erzurum and Erbil Bilkent Concert Halls, and ‘The Bilkent International Anatolia Music Festival’ a touring music festival that has toured all regions in Turkey. With its founding chamber orchestra and modern music ensembles, the orchestra aims to present diverse programs and reach even wider audiences.

Bilkent Symphony Orchestra became the first Turkish ensemble to record internationally for a prestigious label with the release of its CD by EMI in 2003. The orchestra has over 50 CDs distributed worldwide with its own label BMP as well as labels such as Alpha, cpo and Naxos. Today, videos recorded live from concerts are offered to viewers online.

The Bilkent Symphony Orchestra plays under the baton of its former Artistic Director and Chief Conductor Isın Metin.

Isın Metin, an alumni of Bilkent University has also served as chair and dean at the faculty of music and performing arts for over 10 years. He has worked with prominent orchestras internationally in Europe, Asia and the Americas, with appearances in festivals such as Schleswig Holstein and BeethovenFest. He holds a special interest for 20th century composers and G. Mahler in particular and is the only Turkish artist to have conducted the composers 8th symphony. Metin is recognised for his artistic projects involving youth and community and as a champion of works by his nation’s composers, he has received recognition and awards for his achievements in music education and contributions to the arts.

The venue for the ICMA concert is the Bilkent Concert Hall in Ankara, located between the main and east campuses of the Bilkent University. The building was constructed from December 1993 to October 1994. It consists of three floors. The acoustic consulting of the concert hall was done by the Finnish architect Matti Heikkinen. With adjustable acoustic panels and stage lift creating an orchestra pit, the hall can also be used for opera productions.