A Dictionary of Female Classical Music Composers from 1550 to the First Half of the 20th Century, by Mary F. McVicker 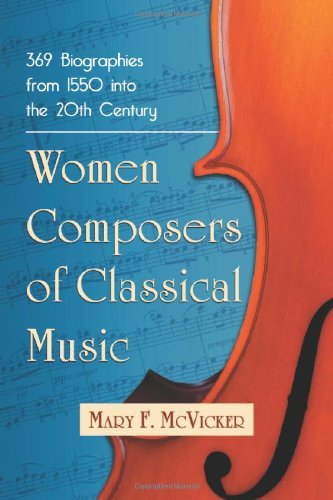 The primary great value of Mary F. McVicker’s work is that she has succeeded in cataloguing an overwhelming mass of material for those of us who would never have known how to, or been capable of, either undertaking the task or completing it.

She has organized her book by time periods (The Renaissance Transition, The Baroque Area, The Beethoven Watershed etc…), by countries (Italy, France, the United States, Poland, Romania, Norway, etc…), and also by carefully selecting, out of 1000 Women Composers of Classical Music, 369 biographies, which are more or less ample.

Unfortunately, these biographic entries are much too concise, basic, frustrating–and often leave us hungry for more details. It’s true that we learn that Dame Ethel Mary Smyth, greatly admired by Johannes Brahms, a friend of Clara Schumann, Grieg, Dvorak, Tchaikovsky, and several others, was the first female composer whose Der Wald (her second opera) was  presented at the Met in 1903 and that Sir Thomas Beecham directed another of her operas, The Wreckers, in London in 1907.  We also learn that Alice Hundt conducted her “Symphony” in Berlin in 1897, despite the vocal disdain expressed by members of the orchestra, and that Isabelle de Charrière wrote at least seven operas, none of which was ever performed. We learn that during the French Revolution, between 1789 and 1795, some twenty works were composed by women, among them Le Commissionaire by Julie Candeille-Simon (Théâtre de l’Égalité, 1794). We learn that… in a word, we learn a great deal from the book. And that’s fine.

A Dictionary of Female Classical Music Composers from 1550 to the First Half of the 20th Century, by Mary F. McVicker