Original Sibelius and an Aho premiere: Hannu Lintu and the Finnish RSO 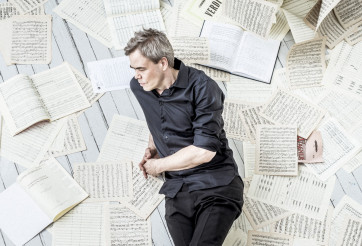 Sibelius is getting the royal treatment in his home country this year, as the music world celebrates the 150th birthday of the great composer. While performances of the usual suspects (the symphonies and the most popular tone poems) are found in abundance in Finland this year, the Finnish RSO has decided to take a different approach to the celebrations by presenting earlier versions of established masterpieces. At least based on the works presented this evening, the results were both frustrating and enlightening.

The program opened with the original (Yale) version of Sibelius’ The Oceanides. In contrast to the final version, this version of the work had the impression of beginning in media res–no real introduction. There was a sense of the music going in multiple directions; it felt fragmented and extremely tentative. Sibelius did take us to a climax, but it seemed surprising and unprepared for. A sense of uncertainty permeated the quiet and tranquil ending.

The next work was the original version of the Violin Concerto, probably Sibelius’ most popular work and perhaps the most performed and recorded violin concerto written in the 20th century.

The Sibelius Violin Concerto is one of the most demanding concertos in the standard repertoire, and the original version pushed these demands a step further. The soloist this evening was the excellent Elina Vähälä, who appeared completely unfazed by this unrelentingly difficult music.

As mentioned earlier, hearing these early versions was both frustrating and enlightening. For listeners familiar with the final versions of these works, it was likely difficult to listen to each work on its own grounds without comparing the different versions. It was frustrating to hear these works in forms that seemed so fragmented, long-winded, and lacking in clear focus. At the same time, being able to make the comparison between versions was enlightening, as it provided further evidence of the composer’s genius; it took a genius composer to take these early versions and transform them to the masterpieces that we know today.

While I doubt that most listeners will be returning to the original versions of these works regularly, the Finnish RSO should be recognized for giving Helsinki audiences the opportunity to hear these works in concert.

Kalevi Aho is one of Finland’s foremost living composers. In contrast to his colleagues Saariaho, Lindberg, and Salonen, Aho has focused on traditional forms, such as the symphony and the concerto. Closing this program was the world premiere of Aho’s Symphony No. 16.

Scored for full orchestral strings and an array of Western and non-Western percussion instruments, Aho continued his exploration of non-Western musical styles in this work. The opening gesture was a declamation; the metal percussion signaled the beginning of a ritual. A beautiful but dissonant string chorale emerged, hazy and questing. Some truly exciting and virtuosic percussion followed. The writing at times seemed influenced by Chinese music, particularly in the lower strings.

The second movement alternated between airy and crystalline textures and a deep, earthy beauty. A sense of meandering was present. Aho led the music to a hypnotic groove led by non-Western percussion–a gesture he has been using regularly in his recent works. The third movement brought a greater sense of expectation, which built up to an impassioned climax (accompanied by some curious choices in percussion–castanets and ratchet). The fourth movement was a fleeting vision, with dancing spirits whirling past. Here Aho effectively deployed a variety of colorful string effects.

The fifth and final movement closed the ritual–this time the metal percussion provided the backdrop of a quietly intense meditation. The orchestral accompaniment became slightly agitated with the entrance of mezzo-soprano. The quiet and mystical conclusion to the work was magical.

While I am not entirely sure that Aho was entirely successful in supporting the work’s 52-minute length, this was nevertheless a major statement by a composer whose creative powers remain at their peak.