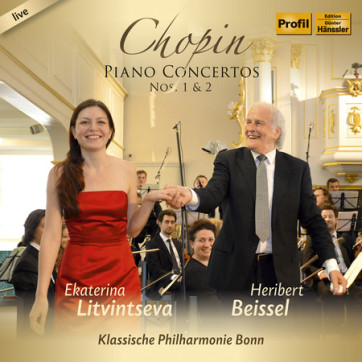 Romantic, virtuosic and young, this is the repertoire of Russian pianist Ekaterina Litvintseva, and the fact is that this choice suits her well.

After a first disc featuring Mozart’s Concertos No. 9 and 12, Ekaterina Litvintseva is back with the Klassische Philharmonie Bonn and its conductor Heribert Beissel. The latter, a pupil of Günter Wand, first founded a choral ensemble in 1959 to play the repertoire of the electoral court of Bonn (i.e. the repertoire played at that court until 1806, when Napoleon ended the medieval system of Electors dating back to the fourteenth century). This ensemble became an orchestra focused on the Viennese classics with a mission to enable young musicians and soloists to give concerts in major German cities, from Stuttgart to Berlin and from Munich to Hamburg.

In the pianist’s second album, devoted to Rachmaninoff’s early works (1 CD profile), we were greatly impressed by her sensitive and emotional approach to a repertoire that obviously touches her very deeply. Recording the two Chopin concertos was a different challenge, given the fact that the greatest soloists have interpreted these works, and that the most the Bonn orchestra could offer was to do its best to support the pianist, without hoping to rival the best ensembles. That said, the Russian musician does well in the game. In the face of talented competitors with more muscular or agile fingers playing with abandon, Ekaterina Litvinseva responds to the challenge with a compelling elegiac lyricism that hits the mark. Her virtuosity is never a goal in itself or superficial; it blends seamlessly with the flow of the movement, well- supported by an attentive orchestra that avoids any untimely intrusion.

With this new album, Ekaterina Litvintseva stays focused on a repertoire composed by musicians in their youth and who are not afraid to share their moods with sensitivity, which suits her well.