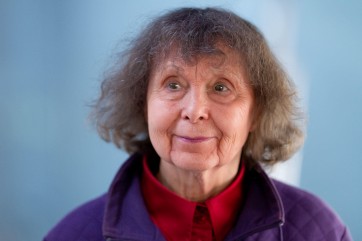 In the year 2016, Sofia Gubaidulina, one of the world’s greatest living composers, will celebrate her 85th birthday. In recognition of this occasion, the Estonian National Symphony Orchestra (ENSO) performed two of the composer’s recent large-scale works, including the world premiere of her oratorio Über Liebe und Hass (On love and hatred). On the podium was Andres Mustonen, a fervent champion of the composer’s music.

The program opened with the Adagio from Mahler’s Symphony No. 10. Mustonen choose somewhat broad tempos; while this provided an additional sense of yearning to this already overtly emotional piece, this came at the expense of the music’s tension. Although the ENSO strings were occasionally shaky in their extremely treacherous parts, and Mustonen could have brought out a bit more anguish in the famous massive chord, overall this performance was nevertheless emotionally effective.

Following the Mahler came Gubaidulina’s Fachwerk, a concerto for bayan, strings, and percussion. The work opened with quiet, expectant chords from the solo bayan, suggesting a journey of deep searching. The orchestra responded with quiet flourishes. From this material the work developed organically, moving between darkness and light, ecstasy and despair. The work concluded with a delirious, (tam-tam-led) blinding flash of light, which in concert was an unforgettable, visceral experience. Gubaidulina’s masterful musical storytelling made this significant, 35-minute work seem half as long.

This evening’s soloist was Geir Draugsvoll, the work’s dedicatee. Throughout the performance, Draugsvoll masterfully navigated through what was probably every conceivable sound and technique possible on the bayan. Draugsvoll’s commitment and belief in this music was unmistakably clear, and was a joy to watch.

Concluding the evening was the world premiere of a major new work, Über Liebe und Hass, for vocal soloists, chorus, and large orchestra. The work opened with a bass recitative, answered with lightly scored, oppressive responses from the orchestra. From there Gubaidulina quickly established the importance of the minor second, an interval featured regularly in her oeuvre. Much of the vocal writing for the soloists was pleading and anguished; the orchestral commentary was often violent. The chorus often served as a soothing balm to the turbulent surroundings, and at times was reminiscent of Schnittke’s most fervent and beautiful choral music. Similar to Fachwerk, despite the present work’s 50-minute length, Gubaidulina never let go of the listener’s attention.

Although Gubaidulina is a composer who has never shied away from confronting darkness and conflict in her music, the overall impression from this work was deeply unsettling. Although the work concluded with a brief vision of peace, large sections of this music were desperate, oppressive, and troubled. Perhaps most surprising was the work’s central orchestral interlude, Der Zorn Gottes (The Wrath of God), which was almost shockingly violent. Nevertheless, there was something almost cathartic and purifying about this violence; maybe the composer was attempting to reconcile her deep religious faith with the arbitrary cruelty of the world.

Having said all that, this work is a major statement by one of the world’s greatest living composers. This work would surely yield even more of its rewards through repeated listenings. I do my consider myself very fortunate to have been at this performance; given the length and forces required, it is unlikely that this work will be performed regularly in the future.