Details and the big picture: Christian Lindberg in Pettersson’s Symphony No. 5 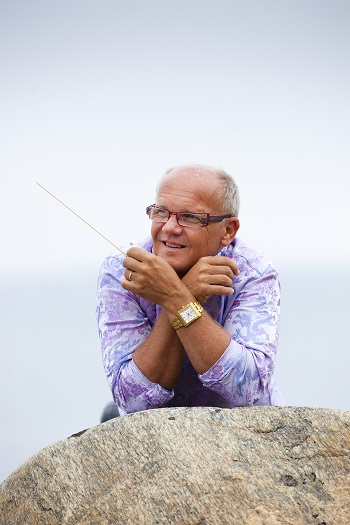 In Petterson’s Symphony No. 5, Lindberg shaped and controlled the latent tension so effectively that the music felt deeply oppressive, almost suffocating in its intensity.

Patience is definitely a virtue with regards to the Allan Pettersson symphony project on the record label BIS. This project began in the early 1990s with the Norrköping Symphony Orchestra (SON) under the direction of Leif Segerstam but was left incomplete. Following a long hiatus, the project was then taken up by Christian Lindberg, who has been dutifully filling in the gaps left by Segerstam. Curiously, Pettersson’s Symphony No. 5 was previously recorded not by Segerstam/SON but with Moshe Atzmon and the Malmö Symphony Orchestra. With this evening’s performance (and subsequent recording), the SON will be on track to have recorded all of Pettersson’s symphonies.

The program opened with Weber’s Oberon Overture, which acted as an effervescent curtain-raiser to the more serious fare to come. The tranquil opening featured rich yet transparent strings, which then moved into livelier territory, contrasted with similarly tranquil pastoral music.

Johann Baptist Georg Neruda’s Concerto for Corno da Caccia provided an opportunity to showcase this unusual and rare instrument, which looks like a miniature French horn and sounds somewhat like a cross between a trumpet and French horn. The music itself was not particularly memorable, sounding like generic music of the 18th century, but hearing this instrument in concert was nevertheless worthwhile.

Soloist Pacho Flores picked up a regular trumpet for the next work, Lindberg’s Akbank Bunka. One of the most distinctive features of Lindberg’s music is its immediate impact and ease of accessibility. Akbank Bunka was no different. The first movement opened on a bed of glistening strings, with the solo trumpet ushering in the sunrise. The entrance of the full orchestra threw everything off track, which led the soloist to explore new, occasionally exotic landscapes. The second movement sounded at times almost anguished, while the final movement was a wild, virtuosic ride at full speed. Flores’ virtuosity was especially breathtaking in this work, in particular the rapid scalar passages which seemed to fly off with ease.

Allan Pettersson’s Symphony No. 5 is notable for its obsessive use of a single interval, in this case the second. This presents some challenges for both performers and audience, as the composer’s monomaniacal focus on the most minimal of material can sometimes come across as aimless note-spinning. What makes this piece arguably one of Petterson’s greatest symphonies, however, is the latent, slow-burn tension, built up over protracted stretches, finally released in one of the composer’s most terrifying (yet extraordinarily simple) orchestral eruptions.

Having performed and recorded Petterson’s symphonies together for over half a decade, Christian Lindberg and the SON have this music in their blood. What has made Lindberg’s interpretations so successful in this music is not only the fastidious attention to detail but also the focus on the large-scale architecture; these aspects are particularly critical in the Symphony No. 5.

Not surprisingly, this magical formula worked wonders in this piece. Lindberg seemed to savor the hushed yet disturbingly grinding dissonances in the grey and desolate opening, yet found soothing warmth in the resolutions provided by woodwinds and low brass. The extensive symphony proper opened with a flurry of activity, but the focus on details was always present: eruptive low brass, trumpet interjections, clipped dialogues between orchestral sections, careful attention to dynamics. Lindberg shaped and controlled the latent tension so effectively that the music felt deeply oppressive, almost suffocating in its intensity. The final section, an extended leave-taking, finally achieved peace by moving away from the tension but not necessarily by releasing it.

It goes without saying (again) that Lindberg and the SON delivered the goods in this music. This was a performance that will stay with me for a very long time.