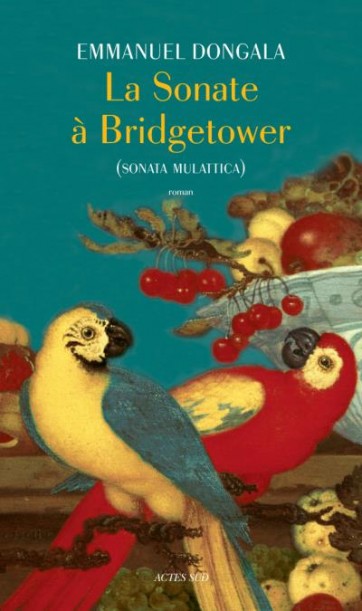 The Bridgewater Sonata by Emmanuel Dongala presents a fictionalized version of the apprenticeship of the Polish virtuoso violinist George Bridgetower, to whom his friend Beethoven initially dedicated his Violin Sonata #9, only to finally dedicate the piece to Rudolph Kreutzer.

A beautiful morning in 89…that is, 1789… Coming straight from Austria, « Prince of Abyssinia, Famous Negro of the Caribbean », or more precisely, of Barbados, the same person whom Tomassini calls « The Moor »,” Frederick de Augustus Bridgetower de Bridgetown, « Special envoy to Prince Nikolaus Esterházy at his Eisenstadt castle…, personal friend of Maestro Haydn », arrives in Paris, dressed like a Turk (or perhaps a Persian?) He’s accompanied by his young son, 9 years of age, a superbly talented, even prodigy, violinist, whom he must introduce, then put on display, then make famous in the city, because now the family’s entire future livelihood depends solely on the child. A few letters of introduction smooth the way and very rapidly, George is able to present his first concert at the Salle des Cent-Suisses.

Success, triumphs, honors…Right here and now, we could invoke a certain Wolfgang Gottlieb, who had also passed this way a few years previously, since it seems quite clear that Frederick had already based his entire strategy on Leopold’s! We meet Giornovichi, the Chevalier de Saint-George, Legros, Kreutzer, that vast number of « little elegant worldly aristocrats, as well as those rich bourgeois », patrons and protectors, who had first to be identified, then solicited. George is talented. He‘s a charmer (Papa makes the arrangements, sets up some concerts and recitals.) A natural congenial personality does the rest. At home with Madame de Montesson, the Bridgetower « couple » is also welcomed by Desmoulins, Chénier, Jefferson, Monge, Madame Roland and others, such as Etta Palm, Louise Félicité de Kéralio, and Lafayette…But the weather’s getting too warm in Paris. It’s July 14 and time to leave France.

We find them next in London, penniless, in the rough East End neighborhood of the docks, and especially alone without little Matilda, with whom George fell in love at the Hotel Brittanique in the Rue Guénégaud. Once again it’s time to dazzle another capital. But we’re in the 18th century, in a novel, moreover in London, therefore in the best of all possible worlds. Is it chance? Circumstance? Plotting? Maneuvering? In any case, it happens that one evening Papa Bridgewater bewitches the renowned Frau Papendieck, who brings the youngster to the attention of the Prince of Wales, who in turn arranges for him to play for George II and Queen Charlotte. After that will follow Bath, Brighton, the friendship and affection of Clementi, Giardini, Haydn. The Prince of Wales is captivated by George and becomes his mentor, his Pygmalion, much to Frederick’s displeasure, and the child abruptly escapes from his father, who is deported from England by this same Prince!  George will spend the next 13 years in England, during which time he strengthens his already close ties of friendship with Sterne, Sancho, Herschel and Edridge.

So here we are! Paris had discovered him; London had idolized him. Vienna might well bring him fame and fortune. George stops off in Dresden to see his mother and young brother Friedrich before going on to Vienna, where he becomes friends (a mutual, spontaneous attraction) with a certain Beethoven…But it’s high time to let you, the reader, discover for yourself the object of the novel–the Sonata for piano and violin, number 9, opus 47, in A major, of Ludwig von Beethoven, dedicated to George Hightower, re-dedicated to Rodolphe Kreutzer (who never played it), discussed on pp. 265 to 333.

On page 333, Emmanuel Dongala writes: « This book is fiction, based on real facts ». That sums it up. No detours. No ambiguities.

A new King’s Way, in some sense, because the documentation, as with Chandernagor, is considerable. From the start, we’re captivated by the impressive, unusual, and endless array of anecdotes, settings, and portraits, of scenes, sometimes natural or realistic, sometimes vivid and biting. As for Paris : its cafés, its cheap restaurants, its washerwomen, its thugs, its gardens, its town houses, its palaces. London: its pickpockets, its prostitutes, its stench of alcohol or greasy leftovers, its gardens, its town houses, its palaces. Here you can discover the vivid realism of Avignon, multicolored and sparkling, as it was during the time of Alphonse Daudet’s Popes, or that of Lawrence Durrell’s Alexandria, equally colorful and diverse, not forgetting the worlds of James Joyce or Laurence Sterne.

Rich and teeming, this bildungsroman never forgets the subjects of its time, approached with energetic yet controlled strokes, without any great highs and lows or distinction: Racism (p. 132, the « cartridge » incident, blamed on the Bridgetowers by the Black police in the heart of Paris); slavery; the plight of quadroons, octoroons, and other societal outcasts; abolitionism (following his deportation from England, Frederick joins Toussaint Louverture’s army in Haiti); the valuation of individuality. This multi-facetted polyphonic novel, with its elegant, graceful, uncluttered, discreet style–never outdated, often as virtuosic as it is brilliant, expressive, high-flying, even picaresque–and its caustic scenes of local color beguiles, captivates, and conquers.

A work to be read, therefore (all other activities abandoned) while listening, of course, to the Sonata for Bridgewater, the « Sonata for a daft mulatto » (Beethoven).