Christian Lindberg in Allan Pettersson’s Symphonies No. 5 and 7 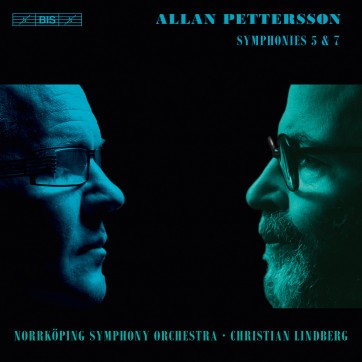 Like other releases in this series, Lindberg exposes every detail and every colour in Pettersson’s Symphony No. 7 while maintaining total control over the work’s overall structure.

Christian Lindberg and the Norrköping Symphony Orchestra (SON) are nearing the finish line of arguably (forgive my biased opinion) one of the most important recording projects of the 20th/21st centuries: the complete symphonies of the Swedish composer Allan Pettersson. The Swedish record label BIS initiated this project in the early 1990s and after a string of exceptional performances by the SON under Leif Segerstam, the project was put on hold for undisclosed reasons. In the early 2010s, Christian Lindberg picked up the project and has since consistently produced reference performances with the phenomenally dedicated SON.

The context for the present release is interesting for a number of reasons. On this disc we have Pettersson’s most popular composition, the relatively frequently performed Symphony No. 7. We also have the Symphony No. 5, which on the basis of informal social media surveys, seems to be an elusive work even among Pettersson enthusiasts. Both works are also well-represented on disc and radio recordings, despite their differences in popularity.

The Symphony No. 5 initiates what could be called the first “mature” phase of Pettersson’s symphonic output. This work is notable for its sometimes not-so-subtle use of a single interval (the second), which Pettersson varies and refracts in countless forms. Perhaps what makes this work elusive for some listeners is the seemingly aimless note spinning of this interval, along with the jarring contrasts between simple consonance and violent dissonance.

I personally find the Symphony No. 5 to be one of Pettersson’s greatest symphonies. Not only am I in awe of how the composer can draw out a massive 40-minute symphony out of the simplest of materials, but also his unrelenting control of the work’s slow-burn, almost oppressive tension, which culminates in an extraordinarily simple but shattering climax of cataclysmic proportions. If you are receptive to this work, it will haunt you long after the final chord.

Given the deep familiarity that Lindberg and the SON have with Pettersson’s idiom, it should come as no surprise that the present performance is the new reference of this work. Lindberg avoids indulging in the work’s extremes of expression and instead takes a measured and balanced approach, with his usual fastidious attention to orchestrational detail and technical confidence. Lindberg also has a clear grasp of the work’s large-scale architecture, which is particularly important here as Pettersson takes his time in building up to the work’s two major climaxes.

There are two other recorded versions of this work worth mentioning. BIS’ previous recording is notable for the cold and steely sound that Moshe Atzmon draws out of the Malmö Symphony Orchestra, which is particularly effective in frozen landscape of the work’s opening and in the terrifying climax before the protracted coda. Alun Francis and the Saarbrücken Radio Symphony on CPO give additional focus to some orchestral details and turn in an overall more coherent performance than Atzmon. Despite the merits of these previous versions, Lindberg easily turns in the most satisfying and convincing rendition from start to finish.

The Symphony No. 7 is Pettersson’s breakthrough work and probably his most accessible symphony. The work features easily recognizable and (hauntingly) repetitive motifs and some of the composer’s most achingly beautiful music. Similar to his take on the Symphony No. 5, Lindberg also takes a very balanced approach here, perhaps pushing the concept of “pure information” to an extreme. Despite the emotionally charged nature of this music, Lindberg’s conception always gives the impression of Pettersson masterfully expressing his craft as opposed to simply giving aural catharsis to his pain and isolation. Like other releases in this series, Lindberg exposes every detail and every colour while maintaining total control over the work’s overall structure.

While Lindberg’s take is an invaluable addition to the Symphony No. 7 discography, the great trombonist faces serious competition here. I personally could not do without Segerstam’s (considerably broader tempos yet filled with anticipation, along with beautiful string playing) or Comissiona’s (deeply emotionally expressive and the Swedish RSO in top form) interpretations, so it really is a matter of personal preference for which is the performance of choice in this work.

So, another winner in the Pettersson series from Lindberg and the SON, and another step towards bringing this composer the recognition he has long deserved.