Raphaela Gromes on the discovery of a Strauss score

Raphaela Gromes and Julian Riem have recently released a very special disc devoted to Richard Strauss’ compositions, including the premiere recording for the first version of his Cello Sonata. On this occasion, we spoke with the cellist about this project. 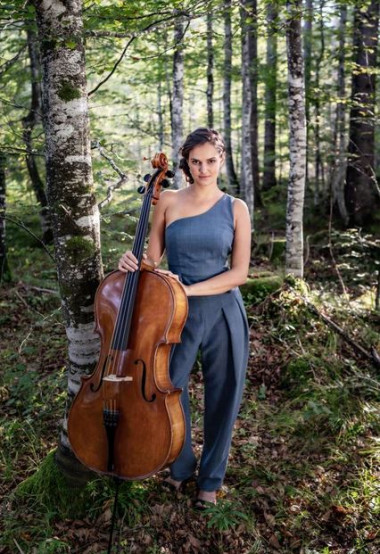 ResMusica: What made you decide that, after you completed the album with Offenbach’s music, you would devote your next one to Richard Strauss?

Raphaela Gromes: From the very beginning of my collaboration with pianist Julian Riem, the Strauss Cello Sonata was a central piece of our repertoire. We met in 2012 at the Strauss Competition in Garmisch-Partenkirchen, where we won the first prize with Strauss’ Cello Sonata op. 6. Since then, we have played it many, many times – perhaps 100 times, I think – and still love it a lot!

RM: What is the main idea of your Strauss disc?

RG: The main idea was to present the first version of his Cello Sonata, from 1881, with this world premiere recording. The original version of the sonata was unknown to the world until now, except for Strauss experts with deep knowledge. Of course, we were very excited when we heard about this piece, and even more so, when we finally laid eyes on the original manuscript and discovered that it was a youthful stroke of genius.

RM: Why do you play the same cello sonata two different times on the same disc?

RG: It’s the first and second version of the op. 6 Sonata – the original one from 1881, unpublished before, and the other one from 1883, which is the popular, much-played Strauss sonata, and which was until now his only known cello sonata. But these are two different works. Strauss uses similar themes only in the first movement; the second and third movements are completely different compositions. Both sonatas are wonderful, but intrinsically different.

RM: What is the main difference between both versions of this sonata?

RG: The first version, the original one from 1881, is more serene and more friendly altogether. You can hear this mood especially in the second movement, with its bright C Major character, which emotionally couldn’t be further away from the almost depressive, deeply sad D minor middle movement of the second work. They are both fantastic pieces, but differ a lot, especially in their tonalities.

RM: When you were recording this disc, did you try to vary your interpretative approach while playing these two versions of Strauss’ work?

RG: This question applies only to the first movement, because the other two movements had no similarities to the 1883 sonata – and, of course, we tried to vary our interpretation based on the score. For example, Strauss uses slightly different tempo indications, articulation, and phrasing which, of course, we wanted to show our audience. Therefore, the second version from 1883 might seem even more enthusiastic and rousing, because of its faster tempo.

RM: What criteria did you have in mind for completing the program of your new disc?

RG: We wanted to dedicate the whole CD to Richard Strauss. So, in addition to putting the two sonatas side by side, we decided to complete the program with arrangements of songs written by the young Strauss at a similar time that he composed the cello sonatas.

RM: Which composer would you like to record on your next disc?

RG: Robert Schumann. I already recorded his Cello Concerto along with Richard Strauss’ Romance, and the Cello Concerto n° 3 by Julius Klengel. The Klengel concerto will also be a world premiere recording. That will be my next disc!