The ICMA jury gave the Lifetime Achievement Award 2013 to Aldo Ciccolini, along with the following statement : « A pianistic legend in his own lifetime, Aldo Ciccolini has been performing all over the world for more than seventy years now. His numerous recordings, some of which offer a generous overview of a composer’s works, have gained ever-increasing critical recognition with the passing decades. At a very advanced age he continues to share his passion for music with audiences and his profound knowledge of the repertoire with his pupils. ICMA’s Lifetime Achievement Award 2013 honors a great musician and an extraordinary personality. » 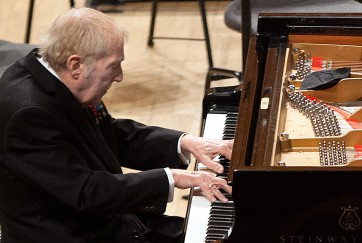 ICMA : This evening you are playing Liszt’s transcription of Isolde’s Liebestod. When did you first come into contact with the music of Wagner’s ‘Tristan und Isolde’?
Aldo Ciccolini : In the opera house, at the Teatro San Carlo in Naples, when I was about ten years old. And I was totally transfixed for the entire duration of the opera. I don’t remember the name of the conductor, but it was certainly an extraordinary performance.

ICMA : I imagine that you later got hold of a piano score of the work?
AC : When I was twenty I bought the orchestral score, for I don’t care for piano scores of operatic works and since I studied composition I was able to read the full score without any difficulty. I discovered Liszt’s transcription of the Liebestod much later on. I consider this music the most beautiful hymn to love ever written: absolutely fantastic. Many composers have given wonderful expression to love in their music but Isolde’s Liebestod is unique in its sublimity

ICMA : Do you interpret her death in an optimistic light?
AC : She becomes reunited with the man she loves. First she praises him and then explains how she has achieved total unity with him. They are no longer two people, but one.

ICMA : Do you visualize these characters while playing?
AC : You must do so. For me it really is as if they were physically present: one dead, the other still alive. However other pianists may visualize things differently while playing this music – and quite legitimately so. There is no single ideal interpretation. Each artist brings his own personal vision to the score, illuminating it by highlighting certain effects, certain details.

ICMA : Would a strongly tragic reading of this music be possible?
AC : I don’t think so. I am very much in favour of interpretative freedom, but the key of B major in this piece is so majestic and solemn that it suggests a vision of eternity. A melodramatic interpretation would considerably lessen the beauty of the music.

ICMA : The original version of the Liebestod is written for soprano. What has been your most rewarding experience working with the female voice?
AC : I collaborated for three years with Elisabeth Schwarzkopf, accompanying her in recital. A marvellous artist with an incredible musical conscience.  As remarkable for her phrasing as for her breath control. She had an entire palette of colours in her voice and used them like a painter. She sang a lot of Mozart, Schumann, Wolf and Strauss with me. And even the famous songs by Chopin. She sang them in Polish, for she was born in Poznań, which is now part of Poland.

ICMA : In this year’s International Classical Music Awards a production of Cilea’s ‘Adriana Lecouvreur’ has won in the DVD Performance category. You met Cilea when you were a student in Naples before the Second World War.
AC : Francesco Cilea was head of the Naples Conservatory when I was an eight-year-old child. My mother was anxious to develop my musical talent and she took me to play for a teacher who was sufficiently impressed to organize a meeting with Cilea in his office at the Conservatory. I remember that I played for him for forty or fifty minutes. Afterwards he said: “Now, turn round without looking at the keyboard.” He played a cluster and asked me: “Tell me how many sound you can here and what the notes are.” I was able to guess them immediately and he said to my mother: “This boy should enter the Conservatory. He is however much younger than the official entry age, which is thirteen. I will speak to the Minister in order to obtain a special authorization.” And so it was thank to Cilea that I could enter the Conservatory at the age of eight. He insisted that I study also composition. And indicated as a teacher Achille Longo, the son of Alessandro Longo, who was a very young composer in his early thirties. And it was under his guidance that I undertook my course of studies.

ICMA : Did Cilea ever teach you himself?
AC : Maestro Longo suffered from asthma – as I do myself – and he was sometimes compelled to rest  because he felt unable to teach. So one day Cilea entered the class and said: “Boys, your teacher is very tired. For the next two weeks I will replace him in the harmony and composition lessons. » I thus had the privilege of showing him my exercises. And he was very kind and understanding at all times. He dressed with incredible elegance. And was truly conscientious in his work. When we entered the Conservatory every morning at eight o’clock, he was standing there, watching all the pupils pass by. It was incredible to think that it was he who had written ‘Adriana Lecouvreur’, ‘L’Arlesiana’ and ‘Gloria’. I consider the first two works simply marvelous, whereas I have never seen ‘Gloria’ live in an opera house.

ICMA :  Do you sometimes read operatic scores even now?
AC : I have a library full of  opera scores. I regret not having always the orchestral score: the Italian publisher Sonzogno for example has never published the full scores of the operas in their catalogue. I have all of Wagner’s and Puccini’s works as well as more recent scores such as Schönberg’s ‘Erwartung’ and the operas of Benjamin Britten. I suffer from incurable insomnia, and at night, when I have difficulty in sleeping, I sit in my armchair with the score and listen to a recording. It is an experience that I have never tired of.

ICMA : In general do you feel attuned to the spirit of the 20th century?
AC : Very much so. It was a cruel century, but I was born in it.

ICMA : Do you feel a strong link to the city of Milan?
AC : Yes. I played at La Scala for the first time in 1955 in a concert conducted by Lorin Maazel. It was an unforgettable experience. I knew that Milan was a city with an illustrious musical tradition and it was a nerve-racking experience performing here, rather like the experience of singers performing in Parma. I have played many times also at the Conservatory.

ICMA : Do you often return to Naples, the city of your birth?
AC : I go back for masterclasses, and I have a recital there in June. It has always been a difficult city, but we have settled our differences!

ICMA : In what situations do you achieve the right sort of spiritual atmosphere for your work?
AC : I am a solitary man. I should have been born on a desert island, but instead I was born in Naples which is quite the opposite of a desert island! Let us say that sometimes I seek solitude. And then there is this endless passion for music. I don’t think much of the unpleasant things that have occurred to me during my life, but focus entirely on the music. When I go to bed in the evening I often start thinking of details of fingering that can be improved. So I get up, put on my dressing gown and go to the piano to try them out. And once I have started I remain there until seven in the morning. I am lucky not to have close neighbours. I work at night and I have discovered that — although my house is very quiet at all times — the silence at night is not the same as during the day. It is as if daylight produced a kind of sound. I prefer the night because one is better disposed and more patient with oneself if everything doesn’t work out as one wishes.

Interview made by Jury member Stephen Hastings ( Editor in chief of Musica) at the Award Ceremony at the Auditorium in Milan, 18th March 2013

The ICMA jury gave the Lifetime Achievement Award 2013 to Aldo Ciccolini, along with the following statement : « A pianistic legend in his own lifetime, Aldo Ciccolini has been performing all over the world for more than seventy years now. His numerous recordings, some of which offer a generous overview of a composer’s works, have gained ever-increasing critical recognition with the passing decades. At a very advanced age he continues to share his passion for music with audiences and his profound knowledge of the repertoire with his pupils. ICMA’s Lifetime Achievement Award 2013 honors a great musician and an extraordinary personality. »