Upon ICMA’s Trophy presentation for the Ballets Russes‘s box set, and the publishing of almost most of his work at DGG, Pierre Boulez accepted to answer a few questions to ResMusica. 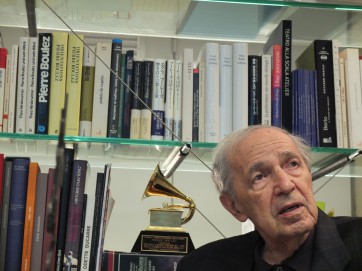 « That is an exceptional moment in my musical life ; I’m happy this recording has been kept. »

ResMusica : You have recorded the Rite of the Spring many times. Which version is your favourite one ?
Pierre Boulez : The one we made with the Cleveland Orchestra, the first version with CBS. We had played the Rite upon a tour in some small cities in the USA. We had security in execution and security in the routine. That was at a time when the Cleveland Orchestra was unique in the world, on account of George Szell’s legacy. That was an exceptional moment in my musical life ; I’m happy this recording remained.

RM : A famous video shows you with Igor Stravinsky about Wedding, where you are highlighting a mistake in the published score.
PB : That’s true.

RM : A controversy recently arose about Boosey and Hawkes’s edition of the Rite, whose sheet music might be inaccurate. What do you think about it ?
PB : I have not heard about this controversy, but I know for sure there are mistakes which have not been corrected by Boosey and Hawkes. The thing is that they make an edition, then someone notices a mistake, such as a semi-tone too high or too low for double bass, I cannot remember. They will not have the edition done all over again for a note. I know a conductor, François-Xavier Roth, who found out errors. As for me, I came across one on one section, maybe not a proper mistake, but weird things, such as chords which you are uncertain if they glide into semi-tones or into full tones. In the same way, there is a bassoon note that goes from a tone to the other, which must be wrong. I have the old edition of the Rite, dating back to 1920. Some mistakes have been corrected, others not, but this is nothing to feel devastated about. I guess if I would look at it closely now, I would discover new ones, but only a few. Sometimes we feel angry at editors, as you send them a set of corrections, but in vain…

RM : You have often directed Une Barque sur l’océan by Ravel on the occasion of the concert you gave on your 85th birthday. Why did you choose this work, which is not as well-known as other ones ?
PB : Some works by Ravel have been undergoing very little correction. I have sent them three pages of changes, but this is quite unusual. Some pieces are never played and people wonder why. Ravel was unhappy with the orchestral execution of Une Barque sur l’océan. I play it in concerts because there is no reason not to.

RM : You often came back to your own pieces, even calling them « works in progress ». Which versions of your works will you leave to posterity?
PB : The finale version of each of my reworked pieces. If someone wants to hear the other ones, he can do that, this is what I always say to myself. There are more and more libraries, especially via digital music, which allows anyone to master this this accumulation, by comparing one or two versions of a same work, an « interim » version and the « final » version.

Upon ICMA’s Trophy presentation for the Ballets Russes‘s box set, and the publishing of almost most of his work at DGG, Pierre Boulez accepted to answer a few questions to ResMusica.