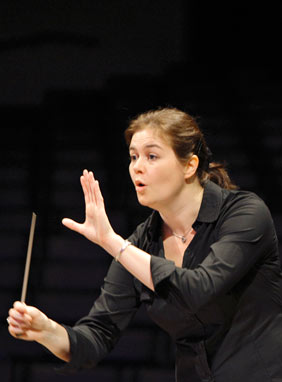 Classical music as we know it today would be quite different if it were not for early twentieth century Vienna. Mahler was taking the late-romantic symphony to almost every extreme possible, while Schönberg and his disciples developed musical systems independent of tonality. Anna-Maria Helsing, yet another gifted Finnish conductor with a steadily rising career, presented an intelligent survey of this music, along with a symphony from Karl Amadeus Hartmann.

Webern’s Passacaglia opened the program. While there is a certain asceticism to the Passacaglia, on several occasions the music  builds up to passionate and rather romantic climaxes. Pizzacato strings introduce the passacaglia theme, suggesting D minor but not quite. Once Webern harmonizes the passacaglia theme, he sets up the foundation for some very interesting harmonic explorations.

One can perhaps detect certain stylistic similarities to Mahler’s Symphony No. 9, written at approximately the same time. While this performance could have benefited from tighter ensemble at the opening and a slightly less episodic feel, it nevertheless served as an appropriate « appetizer » for Mahler’s Kindertotenlieder, with excellent climaxes and contributions from muted trumpets.

Despite the tragic and grief-filled subject matter, one of the most striking aspects of  Kindertotenlieder is restraint. Instead of impassioned outbursts and extremes of emotion, Mahler gives us a generally quiet collection of meditations on the loss of a child. The soloist in this evening’s performance was the Finnish mezzosoprano Monica Groop,  who presented a sensitive and confident account, although clearer diction would have been welcome. Helsing provided a beautifully understated accompaniment, with excellent woodwind playing and clear chamber music textures.

Alban Berg’s Seven Early Songs (Sieben frühe Lieder) came across as lush and effusive in comparison to his classmate Webern. Finnish soprano Johanna Rusanen-Kartano was the soloist in this performance, adding the appropriate passion where required.

Completing the program was Hartmann’s blistering and uncompromising Symphony No. 6. The two-movement work opens with an inquisitive, wandering bassoon solo accompanied by quiet timpani. English horn and oboe enter with beautiful solo contributions of their own. Extended lyrical lines from violins can be found throughout, despite the somewhat austere quality of this movement. The movement does build up to a violent climax, with rapid-fire brass and percussion, but Hartmann does not unleash the orchestra until the next movement.

The second and final movement opens with a brief eruption from brass and percussion, after which the violas introduce a busy fugue. Other string sections enter, continuing the music’s relentlessly contrapuntal nature. Hartmann concludes this symphony, a true concerto for orchestra, with a brutal and deafening steamroller of percussion.

As in the Kindertotenlieder, the Finnish RSO woodwinds played brilliantly, particularly the oboes, clarinets, and bassoons. A little more confidence from the strings in the fugal sections and more power from the lower brass would have enhanced the performance of the second movement further.

Both the Finnish RSO and Helsing should be commended for presenting this intelligently conceived program. Special mention goes to guest principal oboe Paula Malmivaara (visiting from the Helsinki Philharmonic) in her many solos. Helsing’s command of the Hartmann was particularly noteworthy, and hopefully Helsinki audiences will be treated to a performance of this composer’s Symphony No. 8 or Gesangsszene with these same forces in the future.