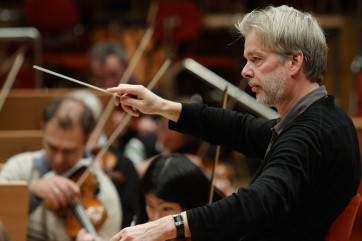 The Orchestre National de Lyon likes Finnish conductors: after Hannu Lintu and before Osmo Vänskä and Susanna Mälkki, Jukka-Pekka Saraste was the one in charge that night.

Saraste is well-known in France. He has been heard conducting the Toulouse and Paris orchestras, the Orchestre National de France and the Orchestre Philharmonique de Radio France, of whom he is a regular guest. He is also a specialist of French music: his Debussy (Virgin-Warner) and Dutilleux (Warner) CDs are true classics.

For his first concert with the Lyon orchestra, Saraste chose a program that looked like a demonstration, and whose climax was a spectacular interpretation of the complete ballet The Firebird. The conductor’s gestures were choreographic as well, and he insisted on the narrative aspect of a story told by the orchestra’s sections and their myriads of hues. The Orchestre National de Lyon reached a very high level of homogeneity, even though some individual performers were especially superb (in particular the woods, with flutist Jocelyn Aubrun, oboist Jérôme Guichard, clarinettist Robert Bianciotto and bassoonist Olivier Massot). From this basis, the conductor was able to use freely the whole range of dynamics. The Infernal Dance of All Kastchei’s Subjects and General Rejoicing parts were truly brilliant in terms of precision, power, and management of the orchestral outbursts.
The Orchestre National de Lyon possesses a typically French sound idendity, which has sadly become too rare lately: airy strings, light and refined woods, a clear but never coarse brass section and percussion bringing the “French touch” when needed. Saraste seemed to like playing with all those tones, which served his poetical and dancing views of the famous ballet.

In Brahms’ Violin Concerto, these French-sounding aesthetics could again be found in the way the strings spread out, and in how limpid their structure sounded. Vadim Gluzman is evidently one of today’s best violinists, and his performance is a reference in terms of classe and musical commitment. His excellent technique backs up the rather unusual quality of his sound. The superb dialogue between him and the orchestra’s woods in the Adagio was truly memorable.

Saraste is a strong advocate for contemporary music, and he had chosen in his program a work from his fellow citizen and francophile Kaija Saariaho: the cycle of four songs Leinolaulut, of short duration, based on poems by Finnish poet Eino Leino. As usual with Saariaho, the effects are scarce but serve a strong and moving instrumental inventiveness into which the miraculous voice of soprano Anu Komsi can melt. Komsi had also premiered the cycle. This refined piece of music appeared as a beautiful entry point to this very generous program, which was acclaimed by the numerous audience.