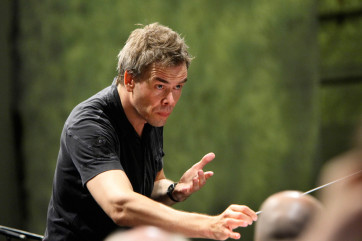 For the major Finnish orchestras, all the seven symphonies of Sibelius appear to be held in equal regard, as opposed to say nos. 2 and 5 which may be preferred over the others elsewhere in the world. This evening’s program featured the new music director of the Finnish RSO, Hannu Lintu, and his interpretation of Sibelius’ final two completed symphonies.

The program opened with Lindberg’s Era, a recent high-profile commission from the Concertgebouw and the Concertgebouw Orchestra. Inspired in part by the opening to Sibelius’ Symphony No. 4, the beginning of Era sounds strikingly similar to the Sibelius, with adjustments to the orchestration and denser harmonies. A brass motif found in the Sibelius is also heard in modified form in Era. Despite these similarities, the music’s vibrancy and swirling gestures, typical of Lindberg, was a major contrast to the dark introspection and even desolation found in the Sibelius. Also particularly striking was the clear influence of Scriabin in the work’s central section. The music works towards what appears to be a jubilant conclusion, but the final celebratory chord is subverted by a rather grinding tritone dissonance.

Coming after the Lindberg was a performance of the first piano concerto of Mendelssohn. The concerto demands little from the soloist other than sufficient technical proficiency, and this work appeared to pose few challenges for Ms. Ott. As an encore, Ms. Ott gave a sensitive and beautifully played account of Chopin’s Nocturne No. 20 in C-sharp minor, which was a far more appropriate vehicle for her musical and interpretive insights.

Though occupying different expressive worlds, the fourth and sixth symphonies of Sibelius could be considered his most elusive. While the sixth symphony has a sunniness and vibrancy clearly absent in the fourth, the former possesses a subtle introversion which can keep listeners at a distance. Nevertheless, this evening’s performance of the sixth was one of the best I ever heard. One of the keys success here was Lintu ensuring a strong sense of flow, especially in the first movement. Special attention was given to the bass line, which provided a clear guide for the music’s harmonic movement. The mildly grinding dissonances, which threaten to subvert the music’s crystalline texture, were also brought to the fore. Finally, Lintu imbued the music with an appropriate restraint, especially in the symphony’s quiet and enigmatic close.

Lintu’s very broad account of Sibelius’ Symphony No. 7 could be considered controversial by some. This was particularly evident during the beautiful strings-only chorale heard shortly after the work’s opening, and in the first entrance of the trombone motto theme. While these tempos allowed one to savor Sibelius’ luminous harmonies and wonderfully slow-morphing middle voices, there was a risk of being pedantic and introducing a sense of tension which might not have been Sibelius’ intention.

The closing pages of the symphony were extremely effective, with yearning strings striving for the final destination (as opposed to fading away to a question mark in the sixth). When the trombone theme arrived for the last time, one got a true sense that Sibelius had reached the peak, and the sunset for one of the greatest symphonic cycles in the history of music had arrived.

The evening closed with a mini-recital of Lindberg performing his own set of piano miniatures, Jubilees. As Lindberg is usually considered as a composer of massive and densely scored orchestral works, Jubilees retains a sense of epic proportions while also being intimate and contemplative.