Opera in America, a cultural history 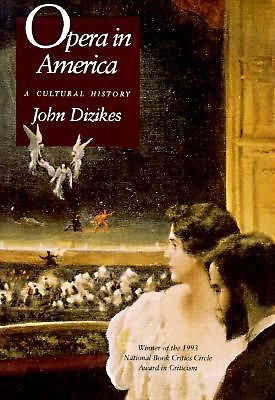 Opera in America, a cultural history, by John Dizikes, can be read simultaneously as a pictorial work (simply because its numerous illustrations play a fundamental role in the text, are integral to it, and thereby make details stand out); as a work of fiction (because very often, the narrative and its photos take over the discussion); as an economic, social, and cultural study of America over the course of its operatic history. Dizikes clarifies, untangles the complex material of opera in America for us, as he might sort out a set of twisted skeins, by minutely analyzing its functions (synchronic and/or diachronic), its driving forces (bankers and/or donors), its public (popular and/or aristocratic)–in a word, its dialectics.

Dizikes does not embroil himself in structural analysis or scholarly dissection; he never pontificates. In this book, you won’t find either an exegesis on William Schuman’s The Mighty Casey or a gloss on Barber’s Vanessa.  On the contrary, you will find History and the ardent erudition of an honest and rigorous specialist who succeeds, at long last, in shedding light on fabrications and myths. A tight, concise, clean and concrete style moves the action forward, often scathing, sometimes lightly academic (the author was a professor at the University of California, Santa Cruz, from 1965 to 2000) but sufficiently airy and romantic, never falling into the realm of crass conformity.

Two or three examples will suffice to underscore the richness, the expansiveness of this virtuosic, meticulous book: the tale of the trials and tribulations of the celebrated Garcia family (Manuel, the father; Manuel, the son; Joaquina; Maria…Malibran!; Pauline…Viardot!), all of whom were seduced by the propositions and promises of a certain Lorenzo Da Ponte, then a professor of Italian at Columbia College, who, in 1833, created the first opera house in the United States, bringing to the New York public, among others, Mathilde de Sharan, Gli Arabi nelle Gallie and other Straniera. There is the Gold Rush, which turns out to be fascinating, exciting, a kind of picaresque yet “realistic” tale of the American West. There is that itinerant troupe, the Pellegrinis, which managed to successfully introduce in Virginia City or in what are today’s ghost-towns of Nevada or Colorado, Bellini, Donizetti, even Mozart, to a public made up of adventurers, gold-miners, and drunks. There is the saga of la Biscaccianti (who, faced with the fierce competition of Catherine Hays, would soon go off to drink away her woes in Peru.) From Anne Bishop to Anna Thillon–everything is told and recounted, punctuated by a thousand anecdotes, with seriousness, rigor, and…humor.

Particularly eloquent is the treatment of black singers and their enormous difficulties, to put it mildly, in achieving a place in opera: Lilian Evans Tibbs, Catherine Yarborough, Roland Hayes, Paul Robeson, Mattiwilda Dobbs, Marian Anderson and her recital of

April 9,1939 on the steps of the Lincoln Memorial before an audience of 75,000 people, and her debut at the Met in 1955 as Ulrica. In a word, from A to Z–from Emma Abbott to Zingarelli’s Giulietta e Romeo,–we would have to cite everything, because obviously, an encyclopedic John Dizikes has read everything, seen everything, heard everything, and retained everything for our enormous happiness. Let’s also note the excellent pages devoted to Chicago, New Orleans, San Francisco, to Treemonisha, Fry, Calvé, Salvi, Jenny Lind (and P.T. Barnum !), to Sontag, Grisi, Boston (and its auditorium, patterned after the Bordeaux opera), to Patti, French opéra-comique, the construction of the « new » MET, simply because Mrs. Vanderbilt hadn’t been able to obtain a box at the Academy…and therefore preferred to open her own theater! Nordica, Hammerstein, Garden, Homer, Caruso,  Farrar, the crash of 29 … and the final pages, created with love (the author doesn’t deny his Greek origins) and dedicated to the greatest, Sophia Cecilia Anna Maria Kalogeropoulos.

Dizikes is presently working on two supplementary chapters which will cover contemporary times. Published in 1993, the book has not yet been translated into French. Translators, take heed; on your mark!