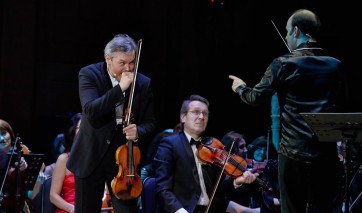 Deep in the heart of the Siberian forests, Novosibirsk is the third most populated city of all Russia. Situated on the legendary Trans-Siberian railway, Novosibirsk, capital of Siberia, is a huge industrial town, where research and education flourish, but it is also an important place for the arts.

Local authorities try to showcase this side of their town, using the fame of one of their citizens: Vadim Repin. 2014 marked the first edition of the Trans-Siberian Festival, of which Repin is the artistic director. Entirely funded by the state and local initiatives, this new festival aimed at featuring all arts to make Novosibirsk into a high place for culture, or even tourism, in Russia. And the organizers thought big: 17 shows in 13 days with almost 200 artists, among which big names such as Kent Nagano, Valery Gergiev or Didier Lockwood. To reach Novosibirsk, the artists had to travel more than 220,000 kilometers. That is almost 23 times the entire length of the Trans-Siberian railway from Moscow to Vladivostok. The festival celebrated the 90th anniversary of conductor Arnold Katz, a figure of the local music scene and with whom Vadim Repin recorded his first album with orchestra. 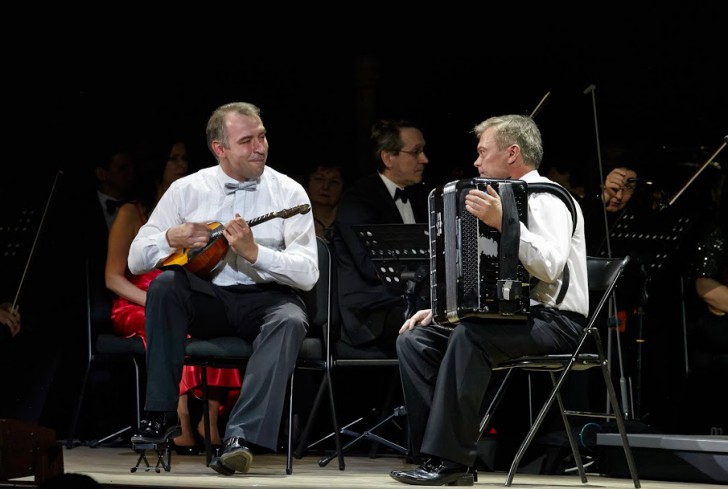 The Novosibirsk Philharmonic Orchestra was the centerpiece of the program. Guest Andrey Sladovsky, currently musical director of the Tatarstan Orchestra in Kazan, assured the conducting. His vision of Mussorgsky’s A Night on Bald Mountain, and of Tchaikovsky’s Symphony No. 4 were not very memorable: rather slow and with an excessive use of rubato, they felt like “vintage Russia”. Thankfully, the orchestra held on and offered a good performance on a technical level. The great mezzo-soprano Olga Borodina, eagerly awaited by the audience, was in her element when singing Mussorgsky’s Songs and Dances of Death (in the version orchestrated by Shostakovitch). Her tone was rather rough, yet she breathed life into the words and never over-played the prosody. It was still a lesson in singing and musical intelligence.

Vadim Repin loves to take the audience by surprise, and so he offered an entire evening to the violinist Aleksey Igudesman. Almost unknown to French-speaking audiences, he is a versatile musician who has forfeited the path that opened before him (Menuhin Academy and Vienna Conservatory) to destroy the boundaries between genres. He composes film scores, arranges, writes poetry, sings, conducts, and creates shows such as “The BIG Nightmare Music” with enormous audience rates on YouTube. With an entire cast of top-flight artists (Vadim Repin, Michael Guttman, Rusanda Panfili and Didier Lockwood on the violin, Andrey Romanov on the bayan, a kind of Russian accordion, Andrey Kugaevsky on the domra and Andrey Pushkarev on the vibraphone), he offered a very idiosyncratic evening. He did not take his violin seriously, going through comic pieces written by himself (including a hilarious “Winter Polka” in which he settles the score with all the people who cough during shows) and a breathtaking rendition of Franz Waxman’s Carmen Fantasy by Repin and the Novosibirsk Orchestra, conducted by Igudesman. Among the guests, the most notable were Andrey Kugaevsky and Andrey Romanov: their virtuosity in Henri Vieuxtemps’s shallow Memories from America was astonishing. Despite his style far removed from the audience’s aesthetic canons, Didier Lockwood was given a rare ovation. The evening ended with the master of ceremonies’ own Concerto for 4½ Violins by Repin, Guttman, Lockwood, Igudesman and a tiny little girl, Violetta Medvedko, for the half-violin part; dancing violinists appeared for the coda. The goal was clearly to entertain rather than to educate, but the unique atmosphere, the offbeat participation of the Novosibirsk Orchestra and the polymorphous talent of Aleksey Igudesman produced an evening that was somewhat set aside from the others, but quite magical. 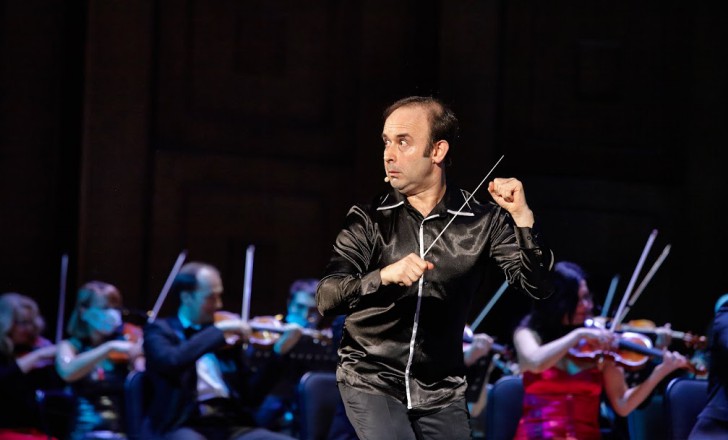 Novosibirsk audiences are used to a vivid cultural life: their city boasts an opéra-ballet, a philharmonic orchestra and a chamber orchestra. Yet, they were attentive and glad to discover new horizons. Vadmin Repin and his team can be proud of the success of this first edition: they have presented that region of Russia with an energetic and positive face, far away from prejudices and clichés, firmly facing a future lying in-between Europe and Asia.