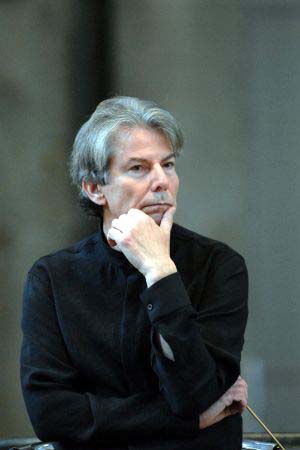 Beethoven’s Symphony No. 5 may be one of the most performed pieces of orchestral music, and the first 2-4 measures of this work could be the most recognized musical excerpt of all of classical music. With a legacy consisting of literally countless recordings and interpretations, how does one approach this well-worn score and still make it sound vital and fresh?

Based on this evening’s performance, Haenchen’s answer to this question appeared to be straightforward: let the music speak for itself. Play the music as Beethoven wrote it, play it well, make it move and flow, and stay out of the way. Conducting without a score, Haenchen’s interpretation was decidedly non-interventionist. This performance was characterized by tight ensemble, particular attention to dynamics and articulations, and flowing tempos. By ensuring that these fundamentals were firmly established, everything simply fell into place. This was an excellent rendition of a timeless classic.

Placing Shostakovich’s massive Symphony No. 8 after the Beethoven was perhaps a curious choice. While the ultimate victory over fate could be one possible interpretation of the Beethoven, the Shostakovich is at best a journey ending in uncertainty, if not a tentative respite from indescribable tragedy.

Haenchen’s interpretation of the Shostakovich reminded me of one of the most memorable lines from Michael Tilson Thomas’ Keeping Score documentary series. While describing what goes wrong with many interpretations of Tchaikovsky’s oft-performed Symphony No. 4, Tilson Thomas said: « People just bash the hell out of it. » Perhaps Haenchen wanted to avoid the same mistake in the Shostakovich.

The first movement begins with anguish and desolation, before leading to passages of increasing frenzy and violence. In this performance, the opening attacks in the lower strings were surprisingly restrained; the entrance of the violins were almost noble and eloquent. The absolutely shattering climax of this movement, normally terrifying (and even dangerously loud) was also restrained. This was a rather surprising approach to music which describes horror and destruction.

The second movement was the most effective of this evening’s performance, with appropriately heavy-footed strings and excellent woodwind swells. Consistent with the first movement, Haenchen restrained the normally ferocious and coldly mechanical string writing in the perpetuum mobile third movement but nevertheless gave us terrifying stabs from the lower strings. The fourth movement passacaglia, usually interpreted as a desolate and almost lifeless landscape, seemed to flicker (albeit weakly) with life. By giving the fourth movement a greater sense of animation, the contrast transitioning to the seemingly optimistic final movement was somewhat blunted.

While many of Shostakovich’s symphonies contain music of great violence and conflict,  effective interpretations do not necessarily need to focus on these elements. However, some of his most terrifying and anguished music (for example, the first movement climax and the transition between the third and fourth movements) is found in the Symphony No. 8, and it is difficult to imagine a convincing performance without these elements properly acknowledged. Although Haenchen’s interpretation presented the validity of a more subdued approach, this music was not given the opportunity to fully express the horror and catharsis written into it.