The Royal Stockholm Philharmonic Orchestra (RSPO), one of Sweden’s flagship orchestras, will present the world’s largest celebration of the Sibelius/Nielsen anniversary year, with a twelve-concert festival focused around the complete symphonies of both composers. Before the celebrations start, the RSPO and Oramo will undertake a four-concert tour of Switzerland.

ResMusica had the opportunity to speak to both Stefan Forsberg, Executive and Artistic Director, and Sakari Oramo, Music Director of the RSPO since 2008, about the orchestra as it starts an exceptionally busy season, and the processes involved in bringing this ensemble to the top. 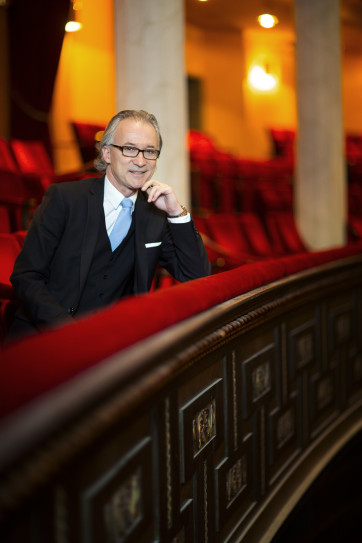 « Let’s not do a celebration, but let’s do the celebration of Sibelius and Nielsen – the largest in the world »

ResMusica: How did your relationship with the RSPO begin, and how did it evolve to you becoming the music director of this ensemble?
Sakari Oramo: It’s been around twenty years since I conducted the orchestra for the first time, so we have quite a long history together. For about three seasons during the mid-1990s I conducted the RSPO in about 3-4 programs a year. The main reason for why that stopped was that I got a job in Birmingham, succeeding Simon Rattle as Chief Conductor of the City of Birmingham Symphony Orchestra, and this naturally took up most of my time. Then of course Alan Gilbert became Music Director of the RSPO shortly thereafter.

My reunion with the Royal Stockholm Philharmonic came when Stefan [Forsberg] invited me to conduct the orchestra at the 2005 Nobel Prize Concert. At that point I knew that I was going to leave Birmingham in 2008, and I carefully mentioned this to Stefan who then immediately started working towards bringing me to Stockholm.

RM: Why do you think Sakari Oramo has been such a good fit for the orchestra?
Stefan Forsberg: They know that he is full of ideas about what sound the orchestra should pursue, which is exactly why I wanted him when Alan left for the NY Phil. And around the time Alan left for New York I found out that Sakari may be about to move. I invited him to conduct the Nobel Prize concert and he joined the orchestra with Yo-Yo Ma; it was fantastic. Within two days we had everything signed with him. We wanted him to come, the orchestra was 100% behind it and it has been like that since.

RM: How does the orchestra plan to build onto both its national and international profile?
SF: We have really aimed for a new horizon for the orchestra, and would like to take another step internationally. Major artists from all over the world come to Stockholm to join the RSPO, and they all want to devote weeks to us. They love the orchestra, they love the hall, and they all say that this is probably one of the best hidden pearls in the music industry. While we do tour and record, we are quite far up north so that’s probably true.

RM: How does the current season compares to what you did before?
SF: Our 2014/15 season is a big one for us, where we are exposing the RSPO’s rich history with major international projects. We devoted our 2014 edition of our annual International Composer Festival to Anders Hillborg, whose work is celebrated in Sweden and abroad. Next up, in March, we have a four-city tour in Switzerland, and in November a major European tour. Then, of course, there is the anniversary of Sibelius and Nielsen. I believe every respected orchestra has a relationship with Sibelius and Nielsen but I dare to say that few orchestras, if any, play their music better than we do. The RSPO is the orchestra that gave the world premiere of the Sibelius’ Seventh Symphony, and we have made celebrated recordings of Sibelius with Vladimir Ashkenazy, and now the Nielsen Symphonies with Sakari Oramo. So when this big anniversary was coming up, I said “Let’s not do a celebration, but let’s do the celebration—the largest in the world, every single symphony, one concert each day”. My program director Mats Engström came up with a beautiful festival, which we are very excited to present in April.

RM: Do  you engage in other activities than concert performances to promote the RSPO?
SF: We have recently started a digital platform, RSPOplay. Here we present symphonic concerts with the RSPO and Sakari Oramo, as well RSPO playing with other world-leading conductors: Muti, Eschenbach, Blomstedt, Gilbert and many more. We also stream international-level jazz concerts and educational material—everything completely free for anyone to watch.
In addition to this we are starting an international orchestra academy, beginning in 2016. Students will be able to apply for a position here, to take lessons, and to receive a scholarship for living in Stockholm. It is a fantastic opportunity to come into the world of the orchestra, and it will be made possible together with Sakari and the top players of the RSPO.

RM: How have the musicians of the orchestra contributed to all these goals?
SF: The ambition of the RSPO is always to be on the edge, and to never to let a minute of rehearsal go to waste. It does not matter if it is contemporary music or a Brahms or Beethoven symphony. Everything goes into the bigger picture, to achieve perfection. The orchestra has built on this throughout its existence, with former Music Directors and also with Sakari.
The orchestra also has a long and extremely strong commitment to society, and the musicians have a passion for sharing their love of classical music with the next generation; whether this means making a kid’s video about their instruments or to host an orchestra academy for the most talented up-coming players!

RM: What are the particular qualities of the RSPO that you are eager to show to the Swiss audiences during the upcoming tour?
SO: The orchestra definitely sounds Nordic—there is a luminous quality in the sound of the strings, as well as a wonderful individuality in the wind and brass, both in terms of soloists and as sections. This is something that I have tried to build up carefully over the long term. If you want to encapsulate it in a couple of words, it is the personality of the orchestra—warm-hearted and respectful.

RM: Tell us a little bit about the tour program.
SO: Honegger’s Rugby is music about sports, and the interesting thing is that there is not a single dynamic instruction in the whole score! It’s all meant to be played as loud as possible, all the time. It’s a very energetic piece—you can really see all those heavy guys running into each other. This piece I think shows the orchestra’s energy and rhythmic precision. It’s quite complicated in terms of rhythms—it’s very “swingy” writing.
We are also doing the Tchaikovsky Violin Concerto with Patricia Kopatchinskaja. She is very well known to Swiss audiences, and she is a violinist who I love working with. This will not be the Tchaikovsky concerto you are familiar with—from Oistrakh recordings, for example. They are the same notes, but probably played with a lot of personality and a different kind of insight.
As for the Sibelius First Symphony, I just think it is a fantastic piece of music. It is one of the great first symphonies that we have, and this piece really puts every aspect of the orchestra to show.

RM: What makes you proud to be Music Director of this orchestra?
SO: So many things! In this orchestra I find an emotional response to what I want to do. I keep telling them that I want less sound and more emotion, and nowhere else do I get such a good response to that. There is a kind of openness and joyful convergence of temperaments between the orchestra and myself. This makes it easy for both sides to understand each other. I think they play with full heart, but without showing off. We just want to bring the music and its sincere emotion, to the point, without anything extra. This authenticity is what makes me happy in Stockholm.

The Royal Stockholm Philharmonic Orchestra (RSPO), one of Sweden’s flagship orchestras, will present the world’s largest celebration of the Sibelius/Nielsen anniversary year, with a twelve-concert festival focused around the complete symphonies of both composers. Before the celebrations start, the RSPO and Oramo will undertake a four-concert tour of Switzerland.

ResMusica had the opportunity to speak to both Stefan Forsberg, Executive and Artistic Director, and Sakari Oramo, Music Director of the RSPO since 2008, about the orchestra as it starts an exceptionally busy season, and the processes involved in bringing this ensemble to the top.