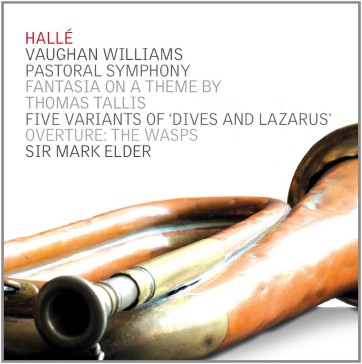 It looks like Sir Mark Elder and the Hallé orchestra might bring us the Vaughan Williams symphony cycle par excellence of the 21st century. Recommended without hesitation.

The British composer Ralph Vaughan Williams was arguably one of the great symphonic composers of the last century. While his nine symphonies have been well served on disc, these works are performed relatively infrequently, especially outside of the composer’s home country. Having previously recorded the Symphony No. 5 and 8, Sir Mark Elder and the Hallé continue on the present release what appears to be a new complete symphony cycle.

The disc opens with one of Vaughan William’s most popular works, the Fantasia on a Theme by Thomas Tallis. Imaginatively scored for two string orchestras and solo string quartet, the music encapsulates the most appealing qualities of the composer: fervent but not effusive; beauty which is both accessible but of great depth.

Elder’s take on this magical work revealed the many nuances of Vaughan William’s confident handling of strings while remaining focused on the big picture. Other highlights included wonderful balances between the two string orchestras, beautiful solo string playing, and absolutely magical pianissimos.

The Pastoral Symphony (Symphony No. 3) is sometimes used by Vaughan Williams’ detractors as further evidence that the composer is unable to create anything of substance which does not depict the British countryside. While it is true that many of Vaughan William’s most popular works fall into the « pastoral » category, the Pastoral Symphony represents something considerably more unsettling.

During World War I, Vaughan Williams witnessed unspeakable carnage while serving in the Royal Army Medical Corps. His Pastoral Symphony was inspired at least in part by these experiences, and can be heard as a meditation on the horrors he confronted. While the work is mostly gentle in mood, the regular use of bitonality, the meandering harmonic progressions, and general lack of resolution do not make for easy listening.

The success of this performance came from Elder’s no-nonsense approach coupled with excellent ensemble playing. One particularly memorable example is found at the conclusion of the second movement, with Elder’s magical shaping of the haunting duet between horn and clarinet, accompanied by a darkly glowing bed of strings.

The Five Variants of Dives and Lazarus returns to the sound world of the string orchestra, this time with the addition of harp. Although based on a beautiful folk melody, the Five Variants seems less inspired in comparison to the Fantasia. Nevertheless, highlights of this performance included clearly rendered contrapuntal lines and a star turn for the Hallé cellos.

Overture: The Wasps is the most light-hearted piece on this disc, and is an appropriate closer for this program. Once again, Elder brought clarity and secure ensemble playing to this rousing work.