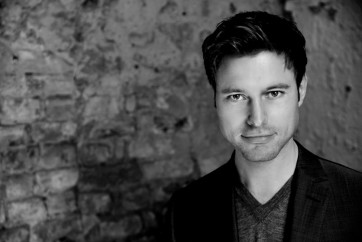 German baritone and « BBC  New  Generation  Artist »,  Benjamin  Appl  begins  his « Rising  Stars » tour through the  European concert in October. In January he was in Paris for a concert bringing a new song cycle written by Nico Muhly inspired out of the correspondence of soldiers in World War I. He’ll release an album in February with Champs Hill Records (Heinrich Heine-Lieder).

ResMusica : You’ve been chosen as a BBC New Generation Artist (for 2014-16) and nominated by the Barbican Centre as a Rising Star of the European Concert Hall Organisation. What changes have these honours brought you?

Benjamin Appl : Both programmes create considerable public interest. As a New Generation Artist, the BBC makes regularly recordings with you, broadcasts concerts live and offers you collaboration with the BBC orchestras. You get used to the process of recording and not being too worried when a microphone stands in front of you while you are performing. It is a fantastic opportunity to train and learn to trust yourself and how to manage stress, as you are allowed to perform each piece only once within the 2,5 years. So you actually have to provide a very large repertoire for it.

The ECHO Rising Star programme covers another aspect: getting the chance to perform in the most famous concert halls in Europe within a year is an unique opportunity for young musicians. So it is a great mixture of exposure on the radio and in live performances all over Europe.

RM : How is the ECHO Rising Stars program helping you with your career?

BA : To have the opportunity to perform in front of audiences in places such as the Paris Philharmonie, Wiener Konzerthaus and the Concertgebouw Amsterdam is wonderful but also quite a challenge. And to get a chance to introduce yourself to a wider audience and the programme directors of the halls is an unparalleled opportunity.

RM : How do you envision your European tour this season?

BA :  I hope that people all around Europe realise that singing Lieder is something in which the younger generation is interested and even passionate about. It is a wonderful genre, it conveys emotions and feelings which are not old-fashioned but which we all experience, like love, losing someone or death. It will be wonderful to encourage people discover their interest in or love for this art form. And of course, for myself, I hope to get a chance to perform in many recitals in the future as possible.

RM : How do you think you compare with other young singers who may be experiencing more difficulty with their careers?

BA :  I feel very privileged and thankful, for every opportunity I have had so far, to people who have supported me, to promoters who believed in me at a very early stage, to my coaches and vocal teachers. I know that the things I have achieved so far are only partly the result of my own work and artistry, but also greatly influenced by my surrounding. Being at the right place in the right time is important. And you also need little bit of luck. Nevertheless this means that I have to work even harder not to disappoint those who respect you and believe in you, and also not to disappoint yourself. Very often colleagues of about my age, whom I much admire as singers should, in my opinion, have made further progress. No one really understands why they don’t get sometimes similar opportunities. In certain cases it is still a mystery to me, how the status of a singer is decided.

RM : How do you plan to manage the demands of concert and opera performance over the course of your career?

BA :  This is a very tricky matter, with which I have to deal over and over again. Of course, I want to find a good balance between opera and concert work. This season my focus is mainly on recital and concert work, especially because of the very large number of recitals within the BBC and ECHO Rising Stars programmes, but opera will represent a good balance afterwards. Not only artistically, but also vocally, I think both forms greatly enrich each other and it is a shame that some people still see a huge distinction between the two forms.

RM : How do you put together your programs and balance well-known and less-familiar works?

BA : Putting programmes together takes quite a lot of time. First, some promoters have certain ideas which you may have to follow. Dietrich Fischer-Dieskau once said to me that it would be ideal to learn as much repertoire as possible before I am 35, as it is easier to memorise when you’re younger, but also, hopefully afterwards you become so busy that you don’t have that much time anymore for learning. So it is also important to put some new repertoire in each recital along with songs or cycles I have performed before. When you put a programme together you have to think of the people who go regularly to recitals but also of those who might be at a lieder recital for the first time. Reaching all of them is to be the goal!

RM : How knowledgeable are you about the French language and repertoire?

BA :  I had the privilege of working with two of the finest French coaches in the classical world. One of them is the French language coach for the Metropolitan Opera in New York and the other one coaches at the Royal Opera House London and for the Glyndebourne Festival in England. Both expanded my love for the French repertoire. The danger for many German singers is to stick only to the German song repertoire as there is so much of it. But I think it is important also to look left and right, so to speak.

RM : What are your plans and ambitions in terms of repertoire?

BA : I think being driven by an interest for new repertoire keeps a musician alive. Of course, it always depends on what suits the voice and personality, but I try to be open to every kind of music from the early to the contemporary.

RM : What operatic roles are you anxious to perform and will you have the patience to wait until you’re ready to undertake them?

BA : I think I generally know my vocal limits, which everyone has. There is a certain repertoire which I won’t be able to perform. To have a good team of voice teachers and repetiteurs around you, whom you trust and who know your voice very well, is incredibly important for a young singer. To be called a “Rising Star” is a wonderful thing, but I would like to make sure that its light doesn’t shine just for one night!

RM : Do you have any role-models among older artists and how do you compare yourself to them?

BA : Of course, there are ideal careers which I would dream of, like those of Dietrich Fischer-Dieskau or Hermann Prey. But I find it very difficult to compare this time with the older generations; times change and the nature of the profession changes very quickly. Also, each singer has an individual voice and even more individual career, which is great! We are perhaps too often tempted to compare one singer with another. I believe in it, that there is a place for every good singer, who is willing to work hard and to achieve something that is true to himself.