Mikko Franck at home in Rautavaara, Prokofiev, and Debussy 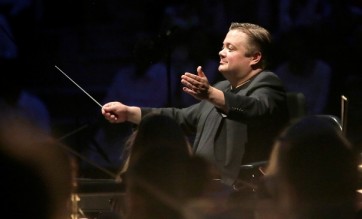 I cannot imagine a better, more definitive performance of this music.

Despite Mikko Franck’s presence in the Helsinki music scene as both artistic and general director of the Finnish National Opera until 2013, in recent years he has been conspicuously absent from the podium of the main Helsinki orchestras. Based on this evening’s performance, one certainly hopes that Franck will come back very soon.

While I admit that my knowledge of Rautavaara’s rather large orchestral output is limited, I would go so far to say that Angels and Visitations is his best work in this genre. It is dramatically and musically effective; it is brilliantly and masterfully orchestrated.

The work opened with a forest of quietly skittering strings, followed by harp glissandi. A roiling sea of suspended cymbals on timpani ushered in the first appearance of the « angel » motive; imposing and full of grandeur. A series of violent eruptions were interspersed with calm episodes suggesting sleep. The final brass peroration could have been taken from a film soundtrack, but was nevertheless wholly satisfying and appropriate.

Admittedly, Mikko Franck does not have much competition in this repertoire but I cannot imagine a better, more definitive performance of this music. Tempos felt slightly broader than Segerstam’s Ondine interpretation, which heightened the tension in a work already full of expectation. Franck paid extremely detailed attention to the work’s numerous orchestral effects, especially with Rautavaara’s dramatically colorful percussion writing.

Part of Alina Pogostkina’s well-deserved recognition comes from her Finnish connection: in 2005 she was the first prize winner in the International Jean Sibelius Violin Competition.

Arguably at this level, the technical difficulties of the standard repertoire are not the primary challenges that soloists face; rather, it is the ability to infuse a distinctive personality on the music without violating the composer’s intentions or aesthetic.

In this regard Pogostkina’s take on Prokofiev’s Violin Concerto No. 1 was wholly successful. Yes, there are technical difficulties abound in this music, which Pogostkina dispatched with ease, but it was the personality that she brought to each note that elevated this performance to the next level. Despite how natural and effortless the music looked in Pogostina’s hands, one was left with the impression that every articulation, every shade of vibrato, every bowing, everything–was carefully considered.

The program closed with a performance of Debussy’s Images. Franck brought a particular sharpness to the rhythms in the opening Gigue, while his focus on maintaining a certain purity in the different orchestral colors was particularly effective leading up to the « guitar » sections of Iberia. A combination of precision and carefree joy marked the final Ronde de Printemps.