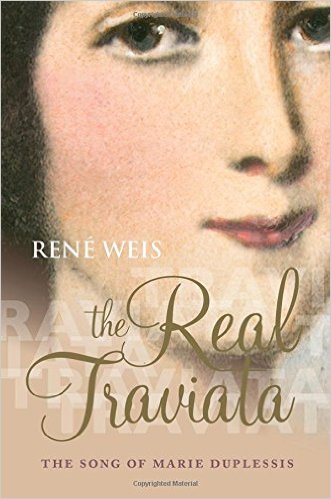 A new biography, rich in detail, at times somewhat dense, which aims to tell us everything about the woman who was, in her time (the era of Lola Montez, Cora Pearl, or La Paîva, of Céleste Mogador or Alice Ozy), one of the most famous of the great courtesans, one of the most brilliant, most celebrated, most courted, and most publicized of the demi-mondaines of 1840’s Paris: Marie Duplessis.

René Weis retraces in detail, with meticulous attention to minutia and an equal display of sensitivity and delicacy, the thousand hidden or well-known facets of the woman who was feted, courted, adored by all of Paris but was to die rejected or ignored by everyone. With precision, he dissects the miserable and pathetic childhood (she begs, steals, sells herself for a cup of soup) of little Rose Alphonsine–raped, tortured by a father who sells her to the deadly Plantier (chapter 2 is wholly devoted to the “Plantier Affair”). She’s thirteen years old.

The author carefully examines the destiny of Marie Duplessis, “the Lady of the Camellias,” who will be searching all her life for a given name, then a family name–from Rose to Marie, from de Plessis to Du Plessis, Countess of Perrégaux– and of her rise up the social ladder, from Orne to Paris, the balls, the elegant dinners, the meetings, the premiers, the Jockey-Club. She’s beautiful, very beautiful (as witness the portraits of Olivier, Edouard Vienot, and Camille Roqueplan, among others.) The Duke of Morny, half-brother of Napoleon III, falls madly in love with her. He will be her lover, her mentor, her Pygmalion. He makes her into the most glamorous, the most refined, the most sophisticated of all the kept women of the century. As they say, “The rest is history…” or almost.

Filled with facts, anecdotes, contemporary gossip, Weis’s book, widely based on Romain Vienne’s The Truth about the Lady of the Camellias” (1888) is right on the mark.

Weis devotes 16 chapters (230 pages) to his heroine, to 1840’s Paris (a chapter is dedicated to the “ladies of Paris” and to the doctors who care for them (!), to the triumphs and failures of Duplessis. Then follow three detailed chapters made up of reporting, exploration, analysis and commentary, including material from Dumas fils’ docu-novel (La Dame aux Camélias), his drama (La Dame aux Camélias), and from that Traviata by a certain Giuseppe Verdi. In particular, Weis closely investigates both versions (1853 and 1854) of the opera, the nomenclature used in the three works (Violetta, Armand, and Germont…who would be none other than Guiche-Gramont) and to Dumas fils’ roman à clef.

Another bit of data: Piave proposing to Verdi (seriously) that he push the action back to the heroic era of Armand du Plessis (!!) Duke of Richelieu. If you’re a devoted fan of Verdi, La Traviata, and Dumas, you won’t learn anything really new from reading this book, which does however have the virtue of establishing order out of chaos and of concentrating the entire morass of documentation which exists regarding Marie Duplessis, the Lady of the Camellias.

An excellent book, skillful and suspenseful throughout because it understands and reveals an honest, estimable woman who was “good company.” Wordy at times, as we’ve said, it can digress and the reader may find himself a bit lost in all those voyages that Marie undertakes, with or without her lover or lovers and admirers of the moment, to London, Baden- Baden, Nonant, Bad Ems, Italy. In plowing through the list of her lovers, one could easily go astray. All of them, or nearly all, remained attached to her and attended her funeral– in no particular order… Olympe Aguado, Agénor Guiche-Gramont, Felix von Lichnowsky, Fernand de Montguyon, Nollet, Gustav Ernst de Stackelberg, Perrégaux (Verdi’s Alfredo), etc… Notable by their absence, Morny, Dumas fils and Franz Liszt, on
tour in Russia. One might reproach Weis for his cold, detached style…and wonder about the “affection” he felt for his heroine, this free-wheeling woman who had been liberated, this woman who knew that the galloping tuberculosis from which she suffered would claim her very shortly. She was 23.