The Royal Flemish Philharmonic brought a palpable sense of commitment and confidence to Petterson’s music. 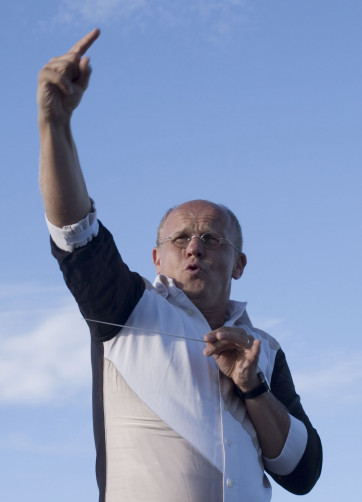 In recent seasons Christian Lindberg has enjoyed a regular and fruitful collaboration with the Royal Flemish Philharmonic (RFP). Based on the results of this evening’s performance of two rarities and a warhorse, it is clear that deep sense of mutual trust and respect has developed between Lindberg and the orchestra.

The first Swedish work on this evening’s program was Wilhelm Stenhammer’s Excelsior!. Stenhammer was composing between the 19th and 20th centuries, when the era of late romanticism was beginning to conclude.

Excelsior! opened in mid-flight, with soaring violins over a propulsive woodwind accompaniment. A solo clarinet ushered in calmer waters. A surprising and chromatic but nevertheless effective section for strings brought the work to its somewhat celebratory conclusion.

While Excelsior! seemed to offer hints of the late romantics (perhaps the work’s melancholy points to Rachmaninoff), at least in this work Stenhammer presented a unique voice worthy of further exploration. The burnished and imposing playing of the RFP brass was particularly notable here.

Yossif Ivanov was the soloist in this evening’s performance of Sibelius’ Violin Concerto. Ivanov’s opening line benefitted from his nuanced use of vibrato and pure tone. Ivanov also paid extra attention to dynamics in the first movement’s extended cadenzas. His warm and burnished tone was used effectively in the yearning second movement, while special care was given in articulating each note in the final movement’s treacherous ascending runs.

In recent seasons Lindberg has been a tireless champion of the Swedish composer Allan Pettersson’s Symphony No. 4. Following a performance in Norrköping several seasons ago, Lindberg has since taken this work to Taiwan and Romania, and now Belgium. A performance with the Royal Stockholm Philharmonic is also scheduled for this season.

Pettersson’s music presents several challenges to orchestras, in particular its unfamiliarity and technical difficulty. While the Symphony No. 4 is arguably Pettersson’s most accessible symphony at least in terms of technical difficulty, the musical and expressive world is nonetheless foreign to essentially all orchestras outside of Sweden. While performances of Pettersson’s music are quite rare, performances that transcend both the technical and emotional demands of this music are even rarer. I am pleased to report—no, I am ecstatic to report—that this evening’s performance was a resounding success on these levels, and beyond.

The individual highlights of this performance were abundant. For example, the careening and shrieking gestures from the strings in the opening were just about perfectly aligned with the percussion. The excellent string playing captured all the beauty (and perhaps naivety) in the work’s numerous lyrical interludes. The central percussion-led climax was truly terrifying, and the anguished, cataclysmic chord before the work’s coda—even though I knew it was coming—practically knocked me out of my seat. More generally speaking, the brass and percussion deserve special mention for their powerful and disciplined playing, and concertmaster Lisanne Soeterbroek for her enthusiastic leadership.

However, what made this performance one of the top highlights of my entire concert-going life (and I have seen many great concerts) was the palpable sense of commitment and confidence that the RFP brought to this unfamiliar music. In addition to moving beyond the work’s technical challenges, the emotional essence of this music was fully realized. The RFP should be extremely proud of what they have accomplished, and I sincerely hope that Pettersson and Lindberg will be featured with these forces again very, very soon.