Everything in clear focus: Christian Lindberg in Allan Pettersson’s Symphony No. 14 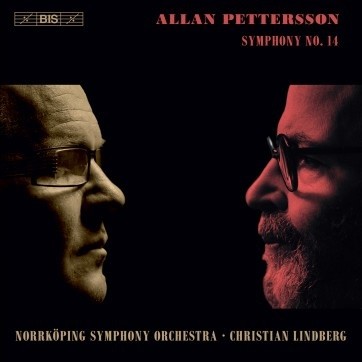 This new release in the series of Allan Pettersson’s symphonies by Christian Lindberg impresses once again by fanatical fidelity to the score and obsessive attention to detail.

Slowly but surely, Christian Lindberg and the extraordinarily dedicated Norrköping Symphony Orchestra (SON) are nearing the finish line of one of the great 20th century symphony cycles: the complete symphonies of Allan Pettersson. While the music of Pettersson is unquestionably demanding on performers and listeners alike, it is also deeply satisfying and purifying (and perhaps even enlightening) to whoever is willing to invest the effort.

The present release features Lindberg and the SON in Pettersson’s Symphony No. 14, written two years before the composer’s death. While undeniably more accessible than its predecessor, the gargantuan Symphony No. 13, the Symphony No 14 nevertheless provides more than its fair share of challenges.

Lindberg faces some stiff competition in this repertoire, namely from the great Pettersson interpreter Sergiu Comissiona. On the surface, Comissiona’s take is visceral and exciting, with the Royal Stockholm Philharmonic exuding both brilliance and technical confidence.

However, similar to previous releases in this series, what sets this recording apart is Lindberg’s fanatical fidelity to the score and obsessive attention to detail. For starters, Lindberg follows Pettersson’s tempos and performance time absolutely literally; Lindberg’s traversal takes 52 minutes (as indicated in the score), while Comissiona is considerably faster at 47 minutes.

The work’s opening provides a thoroughly illustrative example of the magic Lindberg conjures up with this music. Pettersson wastes absolutely no time in throwing the orchestra (and listener) into a whirling storm of contrapuntal activity. While exciting in its own right, with Lindberg everything is brought into the clearest focus: for example, listen to the exchange of sextuplets between violins and violas, the balanced, declamatory brass, and the clearly defined pitches of timpani glissandi. While Comissiona is just as exciting, numerous details get lost in the contrapuntal thicket when compared to Lindberg. Hearing the opening with such bewildering clarity is, while seemingly overwhelming, deeply illuminating.

Other examples of Lindberg’s thoughtful fidelity to the score include the true stringendo before the first entrance of the Barefoot Song (Track 2, 2:42), the focus on the long melody in the first violins (accompanied with equal focus on the supporting second violins and violas) that usher in the second half of the symphony (Track 5, 0:05), and the true « lunga » fermata on the work’s cooly unsettling final chord (Track 9, 3:26).

As mentioned before, Comissiona offers some serious competition in this music. Comissiona does manage to wring out that extra degree of visceral excitement in the work’s second half (listen to prominent percussion and the wild, delirious Stockholm horns, for example), but after Lindberg, Comissiona might come across as missing too many details in favor of this excitement. While I personally would not want to be without Comissiona’s take, Lindberg and the SON again have set the reference in this music.

In addition to diligently performing and recording Pettersson’s music, Lindberg has also been unearthing and re-releasing Pettersson documentaries from Swedish Television archives. Included with the present recording is the 2 hours documentary Sången om Livet (The Song of Life), which portrays Pettersson not only in his own words, but also in the words of his family, colleagues, and associates.