Sakari Oramo in Elgar’s Symphony No. 2 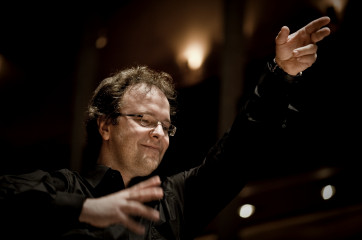 Sakari Oramo did not hesitate in bringing Elgar’s unabashedly passionate and emotional elements to the fore.

During his tenure as principal conductor of the Royal Stockholm Philharmonic Orchestra (RSPO), Sakari Oramo has devoted considerable attention to the music of Anders Hillborg and Edward Elgar. In this evening’s performance, Oramo took the podium in front of his former band to showcase these composers.

Hillborg’s Beast Sampler refers to the composer’s description of the orchestra as a “sound animal,” and this brief 10-minute work is a concise survey of Hillborg’s phenomenal facility with large forces. The opening pages seemed like formless explorations of sound: unpitched blowing in the winds, swelling string clusters that growled and shined, delirious honking in the woodwinds. However, the music began to take shape and direction with the arrival of massive brass chords. Rather than building up to a great apotheosis, the accumulating waves simply dissolved into mist. Regardless of what direction Hillborg was taking, the music always seemed to glisten and shimmer.

Trombone concertos are uncommon in the concert hall, so this evening’s performance of Gunther Schuller’s Eine kleine Posaunenmusik was a rare opportunity to hear the trombone in this context. With the exception of the work’s occasional light-heartedness, there were no obvious similarities to Mozart’s Eine kleine Nachtmusik. Rather, Schuller’s five-movement work often felt improvisatory and somewhat nervous, with frequent shifts of mood. There were certainly moments of great fun; the third movement could have been a chase scene from a silent film, and the fifth movement’s mildly jazz-scented, rapid-fire chatter that ended with a thud. Soloist Darren Acosta was clearly in his element here, relishing in the work’s virtuosity and devilishness.

Sakari Oramo is a tireless champion of not only the usual Nordic suspects (Sibelius, Nielsen) but also of the great British composers. Oramo’s recent recordings of the Elgar symphonies with the RSPO can stand easily along the best British interpretations, so there was much anticipation to hear Oramo lead his former band in Elgar’s Symphony No. 2.

Elgar’s music is often unabashedly passionate and emotional, and Oramo did not hesitate to bring these elements to the fore. In the first movement, Oramo unleashed the brass and timpani, giving the movement’s more confident moments an almost eruptive quality. The dreamy, chromatic second subject was focused and deliberate, while the music’s sinister elements were smouldering and anticipatory.

In the funereal second movement, Oramo emphasized the lower registers in the opening pages, which gave additional gravity to the music’s seriousness. On the other hand, the famous oboe solo at the recapitulation was somewhat de-empasized, which placed the funeral procession and the individual mourner at the same level of focus.

The wild third movement was easily the evening’s highlight. Oramo brought fanatical precision to Elgar’s countless orchestral details, while the thundering steamroller climax was deafening. The white-hot and delirious final pages had to be heard to be believed; it would be difficult to imagine a better rendition of this music.

In the final movement, Oramo brought swagger to the hesitantly confident moments as well as the busy contrapuntal string writing. The wistful final pages were glowing with nostalgia and warmth, crowning a thoroughly memorable performance of what must have been unfamiliar music to both the orchestra and audience.*