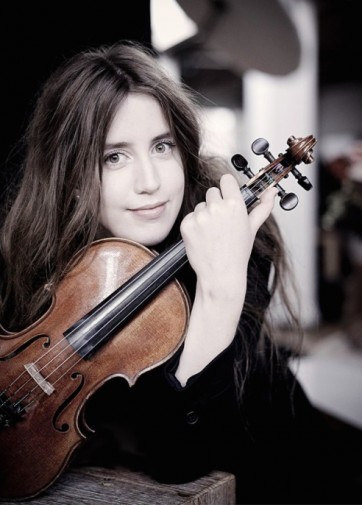 Vilde Frang may have some tough competition, but she could just be the interpreter par excellence of Britten’s Violin Concerto.

In the past decade or so, frequent performances and new recordings of Benjamin Britten’s Violin Concerto seem to be solidifying its stature as one of the truly great 20th-century violin concertos, worthy of the same attention as Sibelius and Shostakovich. Vilde Frang’s breathtaking and urgent performance this evening undoubtedly earned this work many new admirers.

Berlioz’ Le Carnaval Romain opened the concert, serving as a light-hearted foil to the deep seriousness of the Britten. The brief and rapid opening flourish was taut and focused; the following section was imbued with a tranquil flow. Despite Berlioz’ grandiose and celebratory conclusion, the music always felt tightly controlled under Rafael Payare’s clear direction.

Following this effervescent opener came Britten’s Violin Concerto. Immediately apparent was Frang’s beautifully pure and crystalline sound, which was ideally suited for the broad melody with which Britten opens the work. Frang’s extraordinarily sharp articulations brought out Britten’s percussive violin writing, perhaps at the slight expense of pitch definition. Bare audible pianissimos and Frang’s ability to draw out truly ethereal sounds from the G-string upper register were additional highlights of the first movement.

Frang’s sharp articulations paid clear dividends in the nervously propulsive second movement. Watching Frang dispatch with ease Britten’s rapid double stop and harmonic runs was especially enjoyable. Frang’s deep commitment to this work was even more evident in the final passacaglia, where every individual note was colored and shaped, especially in the anguished and unsettled conclusion. Frang may have some tough competition, but she could just be the interpreter par excellence of this concerto.

Despite its warhorse status, Berlioz’ Symphonie Fantastique, with its combination of unabashed romanticism and remarkably forward-looking elements, is always a pleasure to hear in performance. Payare was clearly interested in revealing the deeper layers of this oft-performed work, as demonstrated by this evening’s disciplined performance.

In the first movement, Payare paid not only great attention to shaping the halting opening melody but also the woodwind writing; woodwinds here were not just mere accompaniment or harmonic support but played a critical role in pushing the music forward. In the movement proper, the precision from the lower strings in the galloping effects was memorable. Under Payare’s direction, the music sounded at times slightly buttoned down, especially in the frenzied tutti before the final chorale, but Payare nevertheless rendered Berlioz’ contrapuntal thicket with great clarity.

The main melody in the second movement was both appropriately lilting and somewhat staccato-stepped. Similar to the first movement, great attention was paid to accompanimental figures, this time in the strings. Highlights of the third movement included beautiful solo woodwind playing, in particular English horn, oboe, and clarinet. In the fourth movement, Payere’s attention to Berlioz’ orchestration again paid dividends, particularly in the sudden dynamic swells and various brass effects. Having led a performance characterized by careful and thoughtful control, Payare finally pulled out all the stops in the last movement, leading to a raucous and satisfying conclusion.